If you recall, Caesar had managed to get ashore, albeit just about and, I dare say, with his soldier's socks (the Romans wore socks with their sandals, at least in the north; if you think that all things Roman are stylish, think again) would require extensive drying out. Be that as it may, Jules was clearly taken in by the Briton’s offering of peace, and set up camp, sending out the legions (he had two) to collect corn.

In the meantime, there was a high tide and storm which damaged to Roman ships and forced the cavalry to return to the Continent. The Britons figured that their best approach was to attack the Romans and prevent them from gathering corn (after all, the Britons probably needed it themselves), prolong the war into the winter and see our Jules and his men off. Therefore they hid in the woods by the last patch of uncut corn and ambushed the Seventh legion when it arrived (presumably having beaten their swords into ploughshares).

At this point, the second battle starts. 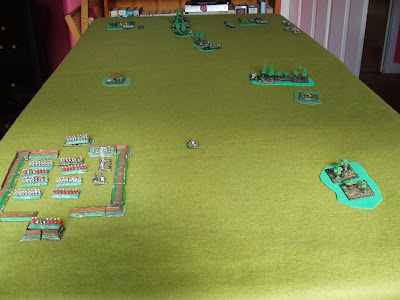 The view is from behind the Roman marching fort, which is obviously front left. The other legion (not sure which it was, to be honest) is in the camp with its feet up, with only a couple of cohorts on guard at the gates, and the scorpions ready to spit arrows at anyone coming into range. In the distance, to left and right, you can just about make out the last uncut fields, each with half of the Seventh legion in, getting in the supplies.

If you look really closely you can see that the woods are full of Britons, awaiting their moment to ambush the Romans and kick them out of their country and away from their crops. In Caesar’s account (Conquest of Gaul IV.32) he sent the guard cohorts ahead, followed by a reserve to second them, while the rest armed and he led them out to relieve their colleagues.

The plans of the two sides followed, more or less, Caesar’s account (he is not, of course, the most reliable narrator in the ancient world). Caesar would rally the other legion (which I mentally designated the 10th, I am not sure why) and lead them to the rescue.

The soldiers are all Baccus, and the hedges and trees are Irregular. I actually placed every tree in my possession, excluding the palm trees (while kent is quite balmy, I doubt palms are native, somehow) on the table. Perhaps, as part of ‘terrain year’ (TM) I need to get some more. The corn stooks in the fields are, I think, by Timecast. For what it is worth, the rough ground to left and right are to my own design. I shall never be an artist.

The rules were my own, Polemos-based concoction; I had to add a fair bit to them to cover terrain and combat in fields and woods before I set out. Additionally, considering that the Romans would be disordered by the terrain, being in fields and dispersed, I have to make some more terrain shaken markers. A minor job but it did delay the start of the battle by a morning.

Anyway, Jules managed to enhance his reputation as a lucky commander. In the first part of the action there was barely a critical roll he made which he did not win. The British foot refused the charge the legions in the fields. When they did and managed to shake a cohort it won the subsequent round of combat. Then the British went to ‘waver’ morale and all the hard work of trying to get them moving was lost. To cap it all, having lost five bases to the Roman’s three, the Roman archers rolled a six-one against a base of chariots to which the British commander was attached. The chariots were recoiled shaken and I had to roll for the commander and, guess what? While the Romans had just been reduced to waver, the Britons went to fall back. Without a general, I could not see how they were going to get moving against Caesar, so I gave up. 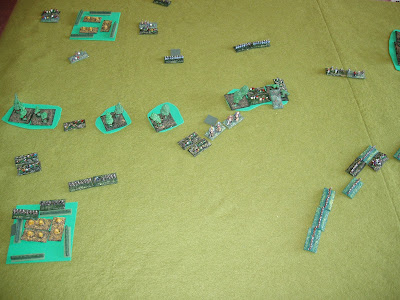 The picture shows the field end of the action at the end. On the far side that vexellation there has suffered a fair bit, losing two cohorts, one of archers and the other a legionary (you can just see it routing off the top of the photograph). The near vexellation lost one cohort to the initial charge of the Britons, supported by some light horse (off-camera to the left), but the Britons made no further progress, in fact, losing three tribal foot bases in attempting to attack the Romans. To the right you can see the perimeter that Jules formed with the Tenth Legion. The base of archers who finished the battle are there, second base down from the top, just to the aide of Jules (who will, of course, claim the credit).

There were 22 bases a side here, and I did not increase the tempo point allocation for the forces involved. Thus each side had but 1D6 to bid for tempo and order soldiers about. This made it, I think, very hard for the Britons to co-ordinate their attacks, and also enhanced the ability of the vexellations to reform and resist the British when they did turn up – legions or defined vexellations thereof get an extra tempo point per turn, reflecting their better junior command.

The other thing that was important was the general’s ability to order folk around. Both sides did this. At the beginning of the game Caesar used his personal point to form up the Tenth legion and move it out while the Seventh were doing their best to resist. The British general used his to move his chariots into javelin pelting range of the Romans, although to rather less effect.

Historically, Caesar rescued the Seventh legion but decided that the situation was too hazardous to risk battle (hence the title of the post – Conquest of Gaul IV.34). This is, I suspect, a bit of a gloss. While I do not claim that a wargame can really tell you what happened, I doubt if the Romans were in much of a state really to fight having been ambushed and nearly duffed up. Still, both sides fought on.

I learned quite a lot about the rules from this battle, and so I have revised them, and their WotCR counterparts. I am gradually transferring what is in my head to the page to make it work. Incidentally, the Heretical Gamer fought Flodden using the WotCR rules, which was kind and interesting as a write-up.