‘Don’t you need ecclesiastical authority for that, not mine?’

‘Not exactly, ma’am. A hell burner is a ship filled with gunpowder and set on fire.’

‘Exactly, ma'am. The idea is to sail it into the middle of the enemy fleet and set them on fire.’

‘Won’t they try to get out of the way? I mean, at Gravelines the English ships did not set any one of Uncle Phillip’s on fire.’

‘Correct, ma’am. But if the enemy ships were in a confined space, or otherwise undermanned, then they could not get out of the way and would be, so to speak, toast.’

‘What sort of confined space are you talking about?’

‘Suppose it was a small harbour at dawn on a high tide, ma’am. Where the crews are mostly on land and there are a lot of other things going on as well.’

‘What sort of other things?’

‘Well, ma'am, landing parties in the harbour and on the shoreline, perhaps some naval bombardment of the town, maybe an invasion going on at the same time.’

‘So what, exactly, are we talking about?’

‘Onetee harbour ma’am. It is chock full of Dutch ships, and we have just secured Teetwo on the other side of the estuary. It would seem a shame to miss the opportunity of at least damaging the Dutch fleet, even if we cannot seize the harbour.’

‘Why could we not seize the harbour and the ships?’

‘Well, ma’am, there is the small matter of the Dutch army camped just outside the town. It seems better to at least attempt to fire the ships and land, rather than to attempt to land and risk missing the ships.’

‘Very well. Isabella’s hellburner it is.’

Those of you with a decent medium-term memory and an interest may well remember the scenario. The Spanish, in 1631, attempted to seize ports near Bergen-op-Zoom by sailing there. The Dutch navy responded and there was a small dust-up. The result was that part of the Dutch navy took refuge in one of the Spanish target harbours, T1, while the Spanish seized T2. Next, the Dutch army attempted to recapture T2, now dubbed Teetwo for wargame purposes but failed due to a spectacularly successful flank attack by the Spanish navy. This has led to the situation where the Dutch are rather precariously hanging out in Onetee as described above. 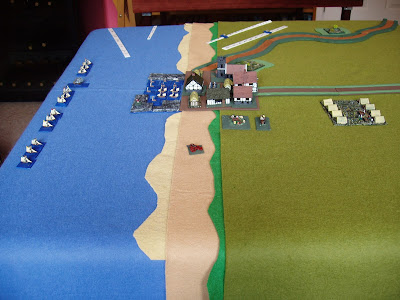 To the left, looming out of the dawn is the Spanish small boat fleet (or around half of the original, actually) together with Isabella’s hellburner, aimed at the harbour. In the port, you can see the Dutch half-fleet and to the right the camp of eight bases of the Dutch army. The twelve are made up by a regiment in the village, of which a base of shot are on guard, and the gun, seen this side of the village. If you look really closely, you can see a guy with a telescope on the jetty.

I confess to having had considerable doubts about this scenario. The Dutch started off deployed, but that seemed too easy for them, so they were stood down into their tents. The plan was for a messenger to go from the lookout to the village and thence to the gun, whose firing would raise the rest of the camp. The weather incidentally was fair and the wind was blowing up the table (you can see my markers on the far side). It was a turn or two before high tide.

I had a bit of trouble deciding on Spanish tactics as well. Finally, I got their sword and buckler men (dismounted cavalry) to hit the harbour, landing outside the walls at high tide, while the fireship entered and caused mayhem (hopefully). Meanwhile, two regiments of infantry would hit the near side beach (the other was ruled out because of the stream) form up into anti-cavalry formation (shot – pike – shot to give the shot +1 in combat with mounted) and then move towards the Dutch camp.

This was a complex battle to run. I had to keep an eve on the weather, the wind and the Dutch waking up. Further, the Spanish landing from ships or small boats were disordered, as were the Dutch when they woke up, except for the shot on guard in the town. Dutch foot waking up took three terrain shaken markers, the cavalry took four. Needless to say, I ran out of terrain shaken markers again, even though the Dutch camp was very slow to wake. 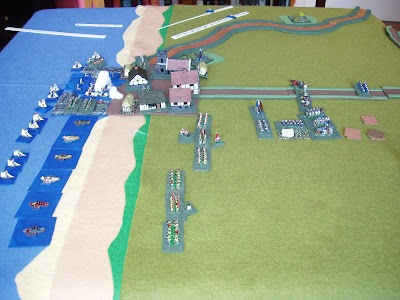 The penultimate positions are above. The Spanish sword and buckler men have taken the village – the remains of the infantry garrison can be seen fleeing. The Dutch artillery has been overrun and the reason there is little smoke in the harbour is because the Dutch ships immolated there have mostly burnt to the waterline and sunk. At this point I called a coffee break and considered the Dutch position and whether to fight on. I decided to do so but the next move found the Spanish infantry in contact with the weakened Dutch foot in the centre and the shot were routed (while the Spanish shot pushed back the Dutch pike – it really was not their day). The rout of the shot swept away the newly woken foot behind them, and they routed the reiters behind them who had just mounted up. The Dutch were now seven bases down, giving them -2 morale level. A dice roll later and they routed.

‘Excellent. Did you catch another general for me to tease?’

‘Unfortunately not, ma’am, but we do have Onetee harbour as a new base to choke Dutch trade with, and quite a few charred ships.’

‘What are we going to do with them?’

‘Some might be salvageable, ma’am. We are getting our shipbuilding experts onto the case.’

‘Do we have any shipbuilding experts?’