‘I heard you the first time Amnesia.’

‘It is nice to have the fortifications completed, isn’t it sir?’

‘It has been a long time coming, captain.’

‘Good of those Cossack labourers to come in at the last and offer to help. We would never have got bastion four finished otherwise.’

‘It would have taken a while. Anyway, Amnesia, it looks like we are going to be testing them shortly. The Polish army arrives tomorrow, I reckon. And they have siege guns. And ladders.’

Have star fort models, will conduct wargames. However, while various fortifications have been the backdrop of a number of wargames discussed here, a full-blown siege has not been conducted. This is for the usual wargamer reasons for the absence of sieges: they are long, boring, tedious, often inconclusive, hard to model, and so on. Plus, there are few decent (or even bad) sets of rules around for sieges. They just do not have the excitement of a battle.

I dare say that a number of people will now claim that this or that ruleset has siege rules and they are fine, but what there is seem expensive and, also, outside my time period. Still, in cases like this there is nothing for it but to make up your own rules. So that I what I have done.

I will try to get around to PDF-izing the rules and putting them as a link to the rules page linked from the right there. In the meantime, a quick summary will suffice. The rules are driven by the normal Polemos tempo bidding system. This time, each tempo point allows the player with the tempo to turn a card. A suitable suit (red for besiegers, black for besieged) gives a result, which can be anything from another engineer arriving to a break being opened in the walls. There is a contingency for mines and countermines, magazines blowing up, and trenches flooding, but not starvation and disease because my wargames are civilised affairs where such things do not occur. It might also be because I have not worked out a timescale for the turns (probably one turn is one day, but maybe not) nor how to do the accounting. As with all my rules, the information regarding the state of the armies has to be encoded on the table. I do not like making notes and rosters, nor do I have the memory available for every nuance.

It all sounds very posh and organised, but it isn’t. While I have typed the rules up now, they were a scribble on an A4 pad. Still, I have given them a couple of run-throughs now and am quite pleased with the results. 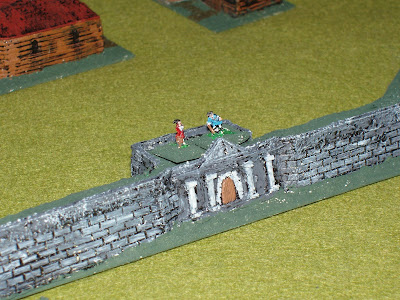 First of all, here are Colonel Cranium and Captain Amnesia on the town walls. We are back in Tsarputinsburg where the fortifications have now been completed, and our officers are watching the enemy deploy. The discerning reader might note that I have discovered the macro lens on my camera; do not be too hard on the painting, these are 6 mm figures.

The first run-through of the rules involved some cheating on my part and led to the eventual surrender of the fortress after about a pack and a half of the cards. The cheating was ignoring attempted escalades and sorties, rolling dice for the outcome rather than reverting to the tactical rules. I determined to have another go, and, after one phase, the results are below. 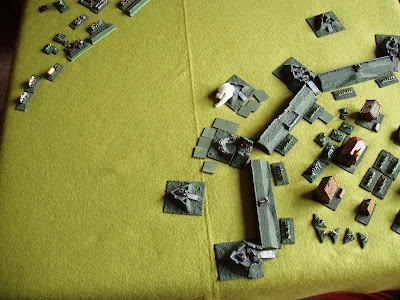 In the second game, the Poles won the initiative and turned up some explosive cards. Firstly, they hit a defender base (the streltsi with the shaken marker by the gate). Secondly, a Muscovite magazine blew up, causing the loss of the cannon on the central redoubt and three hits of damage to it (out of four). Finally, they drew a breach card, leading to the demolition of the bastion, as seen.

On Colonel Cranium’s turn, he drew a sortie card. This seemed fair enough to me – with the gate defences nearly gone and a breach in the bastion, there was not much else he could do except surrender. So a sortie was fought out, between, mostly, the artillery on each side, the cavalry (of which the Poles had the bulk, of course), and a few Muscovite town cossacks. This was a difficult and hard-fought combat on both sides. Both lost two bases, although the cavalry base under Cranium’s direct command distinguished itself, defeating some Polish hussars while being themselves shaken. Anyway, both got to withdraw status and so did. The sortie had not managed to damage any siege works, although with his next and last card Cranium managed to destroy a Polish battery.

At this point, I had to do some pondering, and morale checks. The Poles came to ‘temporize’, while the Colonel threw ‘negotiate’. You might note from that that both sides were rather damaged by both the first turn and the sortie: the Poles were on morale of -5, the Muscovites on -7. A further dice roll decided the outcome. Colonel Cranium and his men were allowed to march out of Tsarputinsberg with the honours of war.

It was a wild, fun and, at times, hilarious game. I am not entirely sure about the rules as yet, but it was good to get the fort into action, and the Russian village. A lot depends on the turn of the cards – the first game was a lot slower than this one, with operations impeded by the sappers and engineers becoming casualties. There might be some more development needed.

‘There is a Polish general outside wanting to see you.’

‘What does he want?’

‘He has a piece of paper; he says it is a contract for our employment in Polish service.’