It is probably just me, but sometimes wargaming just, for want of a better phrase, gets on top of me. I survey the numbers of unused soldiers, the number of unplayed games, and the number of unpainted armies and, not exactly despair, but suffer from a mix of ‘I’ll never get this lot done’ and child in a sweet-shop syndrome.

Further to that, I suffer from being a perfectionist. Not, admittedly, in painting, I have neither patience nor talent for that, but in wanting the games to be the best possible that I can do, particularly when they are part of a campaign narrative that seems to be going along quite nicely. The stakes are somewhat raised in these circumstances, for me at least.

Many people’s response to this would be, quite rightly, to say ‘Just put some toys on the table and play’. Wargaming is, after all, a hobby of the comfortable middle class Western liberal, and it is just a hobby. There may be, as has been explored on the blog from time tot time, ethical, political and certainly historical issues tied up with it, but really worrying about those things are a case of seriously over-thinking the whole thing.

Perhaps, but I can’t help myself sometimes. The Estimable Mrs P. Is now an experienced hand in managing her husband’s peculiar moods. When I moaned about not being able to decide what to do, she fixed me with her beady pastoral eye and observed that I had been flogging it recently and should take a break. When asked for clarification she listed what I had been doing recently (painting Bavarians, a Russian village, undercoating Persians, and a few games) and said I had been overdoing it. I was banned (not exactly, dissuaded from wargaming) for a week.

The return was also discussed (albeit at a later date when I’d stopped sulking). A low-stakes game was suggested. I mentioned before that all painting a no gaming makes for a frustrated wargamer, and so a wargame, to remind said frustrated wargamer why the painting and other things happen, was on the cards. By ‘low stakes’ is meant a game where the ramifications, either for painting or for a campaign, are relatively unimportant.

When allowed back into the wargame snug, I flicked through my blue battle book (the book is blue, not the battles) in which I record the games (usually one to an A5 page, with army list and sketch of field) to find a low-stakes game. Eventually one popped out: Portuguese Colonial against Omani. The astute reader might recall a previous game where the Portuguese landed to raid a market. Another game was suggested of a counter-raid by the Omanis on a Bedouin camp (there is a dispute about the purchase of camels). A few dice rolls later and the scene was set. 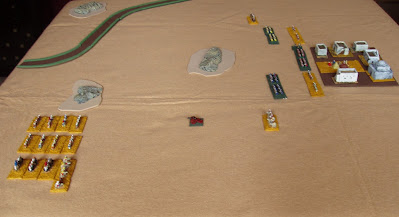 The picture is a little blurry but gives you the idea. The Portuguese set up fairly evenly distributed to defend the village. The Omani decided to try to outflank it by deploying on one side. The idea was to march move in column to the side of the village and then attack the hopefully misplaced Portuguese.

The Omani plan started promisingly enough, with the cavalry and one column of infantry moving into place. 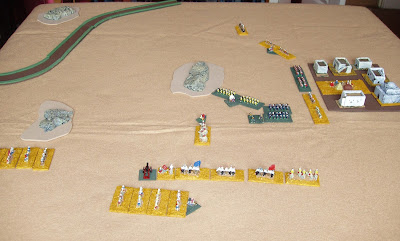 The cavalry are protecting the flank of the moving column, while the Portuguese frantically attempt to realign their troops to the threat. What happened next really showed a difference in generalship. The Omani cavalry, under command of the general charged and was repulsed, losing a base to the Portuguese Arab blades and the shot due to the Portuguese general being on the spot to turn the troops. Thus irritated, the Omani general took the remaining hose and charged the just arriving Portuguese Bedouin allies, causing the camel to flee and pursuing them. While he was occupied the second infantry column marched sedately past the Portuguese foot, to be charged in the rear and routed. Five bases down, the Omanis threw a withdraw (and lucky they did not rout, I think).

As I said, there was a difference in generalship. The Portuguese general spent his time and extra tempo point in re-arranging his men. The Omani general got stuck in. By the time the first outflanking column was in place he was too far away to stop them, and they advanced too far. The second column faired worse, as he was cheerfully pursuing some routed light camels and failed to stop the infantry in the right place, or even order them to deploy in the face of the Portuguese foot.

So, there you have it. A low-stakes game. In terms of the campaigns, it has no influence. While this one is vaguely connected to the previous game, the connection is vague in the extreme. The Vietnamese against Khmer (or Burmese, I cannot remember) are a bit like that. I am unlikely to get too emotionally attached to the armies and the campaigns, such are they are, are even more episodic and disconnected than the main narratives I use. Thus the stakes are low. I have little concern that I will sit back and think ‘that wasn’t right’, because there is even less ‘right’ about these games than the others.

I am pondering the march moves, however. The Omanis simply did not get the tempo points to stop them marching, so they marched right across the board (in one case) and right across the front of the enemy (in the other). In part this was my fault – I did not plan for bad tempo rolling and the general was too far away from the marchers to stop them. In part this was because of a rule decision that troops in march column do not automatically stop or deploy. My thought was that if the general is foolish enough to allow his march columns to be attacked, then it is only his own fault that they fight at -2.

So I was, so to speak, hoist by my own petard on that one. Still, I enjoyed the game, and that was the point, after all.