‘So, my brothers are in arms.’

‘And they have proclaimed themselves Mogul?’

‘Both of them, your highness.’

‘They can’t both be Mogul. I mean, there is only one Peacock Throne.’

‘Is our army ready?’

‘That is unfortunate for him. The astrologers say that the Prophet of Balaghat is to be defended. Order the army to march.’

I do like, as the regular reader of the blog will know, the odd elephant on the table. The Mogul hordes have not been out for a while, either, and have no ongoing campaign associated with them as yet. The other thing, which I dare say I have mentioned (or banged on about endlessly, according to taste) is that it does seem to me that the Indian sub-continent pre the arrival of major imperialist and colonizing efforts from the West is an area ripe for some decent, fun wargames. The relative lack of sources should not deter us, and there were a lot of battles.

So I chose a sort of perhaps not atypical battle of Mogul succession, this one set around another of the seemingly interminable civil wars between the sons of various Emperors, often while the current Emperor was still alive (and even fighting). Even the winner was often weakened by the fighting.

I also wanted to try out some new terrain generation rules, the aim of which was to provide a rather richer environment than the current crop. I think, given the decisions about whether the country is open or not, the original rather sparse terrain can be created, but I can also generate rather more features, which at least might give the sides something more to think about in deployment and planning. 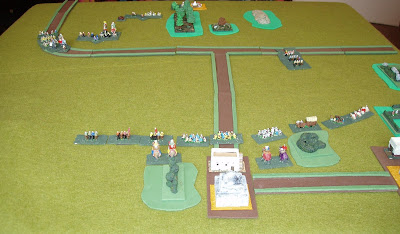 The picture shows the game a few moves in. Aurangzeb’s forces are defending the near edge, consisting of a village (with mosque) to the right, just on the edge of the shot, and the shrine, in the foreground. To the left is a steep hill, and there is rather more rough terrain than usual, alongside the village fields.

On the far side, Murad’s men are deploying. I confess I did have to think about deployment for both sides. Aurangzeb has his levies defending the baggage in the field to the right, then the artillery, war wagon, and infantry, then his cavalry on the left, and elephants in reserve. Murad’s plan was to keep his brother’s cavalry occupied with his light horse while his cavalry overran the artillery and rolled up the infantry line. Meanwhile, his infantry and elephant would speed up the road and deploy in the centre, ready to exploit the cavalry’s success. 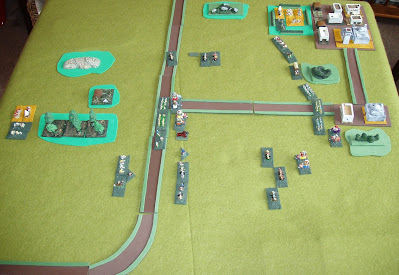 A few moves later and you can see how the plans were evolving. Murad’s light horse was certainly disrupting the opposing cavalry, but Aurangzeb’s artillery was keeping Murad’s cavalry at bay well and truly. This is about the point, as the chroniclers say, it started to get complicated. 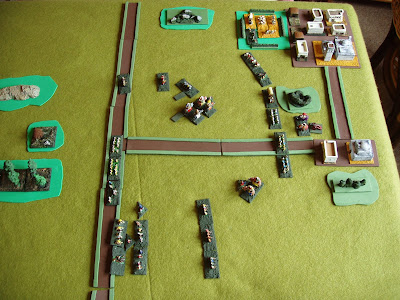 A few moves later and Murad’s cavalry were still being held and disrupted, so the man himself has placed himself at their head on his trusty elephant and rallied a base for a charge, although his supporting elephant base has been hit by fire. On the near side, Aurangzeb’s cavalry have sorted themselves out for a charge on Murad’s light horse. Murad’s artillery has rather incautiously (i.e. I did not have enough tempo to stop them) into the firing line. 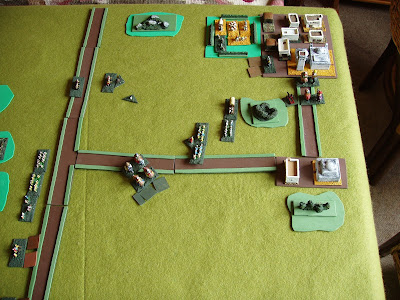 A few moves later and it is all over. Murad’s charge was successful and demolished Aurangzeb’s artillery line. Murad himself set off in hot pursuit only the be hit in the flank by his brother and routed into the village. On Murad’s right, the light horse has fled and Aurangzeb’s cavalry then overran the artillery. You can just see one base of the latter rallying bottom left. In the centre the remaining elephants have clashed, to Murad’s advantage, but it will avail naught, for at this point the army morale collapsed.

It is an interesting point that for many armies (not just eastern ones) when the general was down or perceived to be down, the army fled. Often it was because the general was the paymaster and it was his personal cause that the army was fighting for. Without the general, there was no point in continuing.

This is quite hard to reproduce in a wargame without some artificial rules, but I seem to have managed it here. The general’s base is also an army base here. When a base is routed, two is deduced from the base 12 army morale, and if the general is lost another 2 goes. Thus the loss of the general’s base will cost 4 morale points to the army, or around one-third of the morale. This is highly likely to cause major disruption to the army, if not cause it to flee. In this case, a bad dice roll contributed to a negative morale score for Murad’s men and off they went.

I confess that this was not an expected result of the rules design, but it is rather a neat outcome. Not all armies have the general as a base, of course, and that makes the loss of the general a bit less catastrophic, at least initially. But for armies that rely much more on the general being alive and kicking, it gives me a handy option for representing the inherent fragility of such forces.

‘Aurangzeb. Good to see you?’

‘I was really coming to worship, of course. Why did your men drag me away from my prayers in the mosque?’

‘I wanted a little chat, brother. We need to decide on your future.’

‘Well, I have a nice cell in a castle in the river for you, or we can just castrate and blind you and call it quits. Which would you prefer?’