The Road to Limerick

‘For heaven’s sake, Dougal. It's still dark. What’s the matter?’

‘Can’t you worry in the morning?’

‘I’m worried about the morning, Donal.’

‘Well, I’m awake now. What are you worrying about?’

‘And our way is to ambush the English so they can’t fight back, while they are marching to teach us a lesson we’ll never forget.’

‘You’ve been reading too many English news sheets, Dougal.’

‘So here we are marching on Limerick with these Spanish soldiers armed with long pointy sticks and bang things.’

‘Yes, but we are marching on the city. Usually the English march on our places and we ambush them.’

‘So, with this Spanish general, we’re going to get ambushed. It will be a disaster, Donal.’

‘It’s a bit late to worry about that, isn’t it? The English are only over the pass.’

I have been pondering the fate of Donal and Dougal for a while. You will recall, I’m sure (if you don’t, the Armada Abbeys link to the right should fill you in) that after settling a family feud in the traditional way, the cousins have teamed up with some just arrived Spanish to take Limerick, Dublin and invade England with the view of capturing London and making Queen Elizabeth a Catholic again.

At present, they are marching towards Limerick supported by some Spanish troops from the Armada ships which have just docked in their bay. Blocking their path is an Anglo-Irish army. 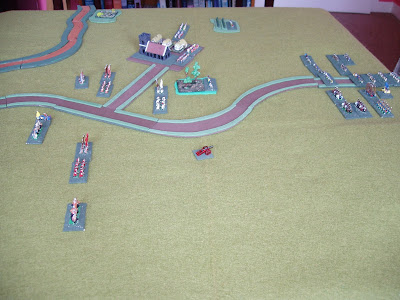 The initial situation is above. The English are centred on the village, wherein their bill and bow units are. Irish skirmishers are in the woods and fields to the front and left. The Hispano-Irish are to the right, emerging from a pass in the hills. They need to proceed along the road to reach Limerick.

The armies are fifteen bases each. The Hispano-Irish have an extra base of light horse and two bases of Spanish, one pike and one shot. The English (who had 13 bases to start with) have two bases of kerns extra. The English aim was to hold their left and delay the Irish in the centre while using their better infantry and cavalry on the open country on their right.

It did not quite work out like that. The picture shows part of the way through the battle. The Irish have deployed their light horse to the left and are giving the English staves a real good pasting. The Irish are also advancing their tribal foot – bonnachts or redshanks – into the centre, while their skirmishers are given the English kern a hard time. In return, the English bows on the Irish right are disrupting the galloglass. 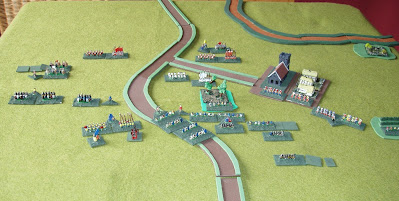 It sort of went to the Irish plan. The tribal foot failed to charge the first time, and the English responded by failing to charge the Irish centre with their demi-lances. The Irish light horse destroyed the English, while the centre galloglass disposed of the English kern in the woods. Finally, a bonnacht base charged the white-coated English musketeers and swept them away, which also accounted for the red-coats who had just arrived to support them. With that, English morale dropped to ‘withdraw’, so they did.

I thought that the English would probably win this one. After all, they have far more pike and shot units than the Irish, even with Spanish support. Perhaps the English should have been more aggressive overall – their main advantage is in demi-lancers. The Irish light horse did a good job on their outnumbered English opponents, however, and the English were a bit unfortunate to have the red-coats too close behind the white-coats when the crunch came.

Could the English have fought on? Well, their right has vaporised and the right-hand infantry looks rather vulnerable to being outflanked and duffed up by the Irish light horse and the Spanish infantry, although the English left is solid and could have had a go at the kerns and galloglass facing them. Overall, however, I think probably they were fairly defeated by an Irish army that had a plan, and which was also a bit lucky with the dice rolls for their light horse.

The figures, incidentally, are all Irregular aside from my tempo marker, which is a big Baccus gun. The buildings are Baccus hovels and a Leven church, and the trees are Irregular. The rules were my own Polemos derived Wars of the Counter-Reformation, available from the rules page to the right.

‘Yes, well. I wouldn’t say I had a lot to do with it, nor you. It was Don-whatisname who did the planning, commanding, deploying and winning.’

‘What would you have said if we had been running back to Iffyahame with the devil after us?’

‘Probably nothing much, Donal. I’d have been puffing too much.’

‘Not much of a team effort then?’

‘Nooo. But look to the future, man. Now we have Limerick at our mercy. I think we should compose a poem in honour of the occasion.’

‘A poem? You mean we should summon a bard?’

‘Maybe, but perhaps we should do it ourselves.’

‘No, but dad never let that stop him either.’

‘I’m not good at even bad poetry.’

‘No am I, but I’m sure that inspiration might strike.’

‘Your brow is awful furrowed, Dougal.’

‘There was a young fellow called Donal,

Who went for a fight in a funnel,

The English they ran,

For they were no fan,

Of Dougal and his terrible pun-al.

What did you think?’

‘You know the English have this new play-write chap called Shakespeare?’