The Time of Troubles

‘Advance friend and be recognised.’

‘I’m part of Voivode Vassili’s army; I’m scouting the wood to find the army of the False Dimitri.’

‘Ah. Well, I’m scouting for Voivode Alexander to find the army of the False Dimitri.’

‘Oh. Dear. Does that mean I have to fight you?’

‘Well, I was only supposed to find you, so I think I’ve accomplished that. But Voivode Alexander serves the true Tsar Dimitri, while Voivode Vassili serves the False Tsar Dimitri. But we’ve no cause to fight.’

‘Do you think either Dimitri is truly the son of Tsar Ivan?’

‘Oh yes. I think our missions are at an end. The armies have found each other.’

‘Should we rejoin our units?’

‘I think it's a bit late for that. We’ll just sit and watch. Vodka?’

As the preamble might suggest, I’ve finished painting the Muscovite army. Not, admittedly, the Russian village – miracles take a little longer, after all. But anyway, to mark the achievement I decided to have a wargame. Nothing, it seems to me is more frustrating than painting vast swathes of toy soldiers and then putting them in a box and forgetting about them.

Here you can see cavalry to left and right, Cossack horse to the front, streltsi behind them, and Cossack foot behind them, with the gun and general. Not too bad a job, I think, even if I say so myself and the painting is measured by my own low standards.

As mentioned, a wargame seemed appropriate, so two sides were dreamed up in a setting of the Time of Troubles, around the start of the Seventeenth Century, as the narrative above suggests.

To the left are Voivode Alexander’s men, slightly more cavalry heavy than Voivode Vassili’s, to the right. Alexander also has the artillery. His idea was to use his extra Cossack cavalry to outflank Vassili on his (Alexander’s) left and roll up the line. Vassili’s approach was to hold his right back and use the resultant superior numbers to smash Alexander’s right.

As you might expect from a battle where there are large numbers of cavalry, this one was quick (by these standards) and chaotic. Alexander decided early on that he needed to plug the gap on his left between the cavalry and Cossack light horse using his reserve cavalry, which you can see above on the right, led by himself. By the time he had marched behind his own troops, however, the threat to his right more acute, so he had to make a U-turn and start moving across the front of his own infantry. Meanwhile, his left-wing cavalry had attacked Vassili’s centre Cossack foot (with mixed results), the right-wing cavalry was under pressure and a base of Cossack arquebusiers was standing up magnificently to being charged by some of Vassili’s boyars. 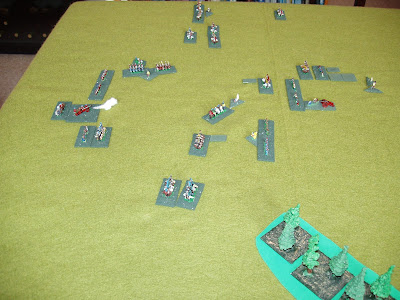 You can see Alexander’s reserve about to charge across the front of their infantry. Actually, they were a tad too far away from the action when the photograph was taken, but rectified that and swept away the boyars threatening their foot, and another base of boyars which had been delayed by artillery fire. In the meantime, one base of Vassili’s Cossack foot had been routed, but the rest of the cavalry attack had been bounced. On Alexander’s left, the Cossack light horse were making little progress against the remaining boyars on Vassili’s right, while Vassili’s horse had routed Alexander’s on that side. On Vassili’s left, a unit of boyars routed their opponents after a lengthy struggle, while Alexander’s charge had taken out two of Vassili’s boyar squadrons. As I said, chaos reigned. 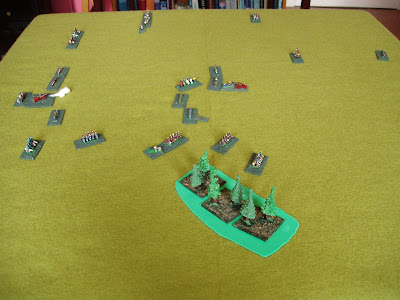 At this point, both sides had lost three bases routed and had to make morale checks. Vassili’s men threw an even score, and so adopted a ‘fall back’ position – all units lost their orders and moved away from the enemy a move. This was a bit tricky given the dispersion of the cavalry of both sides. Alexander threw a -4, and his army was reduced to a rout.

The picture above shows the final positions. Vassili’s left, nearest the camera, has disintegrated either in rout or pursuit. So too has Alexander’s right, while his left is holding with the Cossack light horse, but the foot are looking a bit isolated and friendless unless Alexander can rally his men quickly from pursuit. But now everyone, more or less, is routing.

So a win, just about, for Voivode Vassili and the True Dimitri. But only just: in the words of the historian, the army was too damaged to pursue. Voivode Alexander lives to ride again.

The soldiers are Irregular, as are the trees, the only terrain feature to be rolled on the battlefield. The wood is of course where the scouts are hiding, watching the unfolding events. The painting guides I used were Michael Fredholm von Essen’s Muscovy’s Soldiers (Helion) and Shpakovsky & Nicolle’s Armies of Ivan the Terrible (Osprey). Sometime I might get around to writing reviews of them; the development of Russian / Muscovite armies before Peter the Great is quite interesting. I do already have a few Muscovites which I got in the late 1990s, I think. I could find no information about them then; a bit of repainting might be called for.

‘Thanks. Do you know how the battle is going?’

‘Um. Let me have a look. That’s my lot, and they are moving backwards over there, and that’s your lot and they are, well, I don’t want to be rude but they seem to be running away.’

‘Oh, well. I’m not going to worry about that. Shall we finish the bottle and then potter off when everyone else has run away? It’ll be safer that way.’