The GNW in an Afternoon – Part II

If the game had been fought as a multi-player event, I imagine that there would have been some non-aggression pacts, if not outright treaties and alliances. As it was, this all happened in my head. The initial view from Saxony was that the priority was to defeat the Poles and capture the cathedral, setting up Augustus the Strong to be crowned king. The Danes had little interest in conquering Saxony and wanted to set off for Sweden, so, while both sides deployed a home guard of three bases, a tacit non-aggression pact was entered into.

At the other end of the table, Charles XII, true to type, threw everything at the Russians. The Danes, he figured, were just too far away to bother about, and, having trounced the men in green, he would be able to get back across the river to trounce the redcoats. Peter the Tsar tried to hedge his bets and seemed unsure whether his target was Poland or Sweden. Seeing the eruption of blue-coats across the river, however, he pivoted most of his men to face this, banking on the Poles being too occupied with other matters to be a problem. 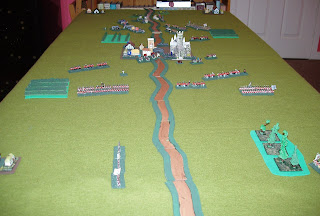 The picture shows the situations hotting up. The Danes and Poles have agreed to non-aggression, permitting the Polish cavalry, hitherto blocking the Danish advance, to redeploy across the river. Some Polish infantry too is on the move south (right in the picture). At the top, you can see the Swedish and Russian columns converging on the ford as the flank guards exchange shots. The Saxons are deploying against the Poles, while the Polish cavalry which was confronting the Russians is withdrawing and racing to aid their comrades. The Poles, incidentally, lost a base of incautious light cavalry to a Russian charge, but then the Russians swung north rather than follow the success up. In the foreground, you can see the Danish home guard and, to the right, a base of the Saxon equivalent.

The major clash in the west was between the Saxons and the Poles, or rather the latter’s cavalry. The picture shows roughly half-time. The Polish hussars have seen off a base of Saxon cavalry, and the rest of the available Polish cavalry is about to have a go at the rest of the Saxon mounted. You also get a nicer view of the cathedral at no extra charge, although the card is a bit shiny for the camera flash to do a good job. 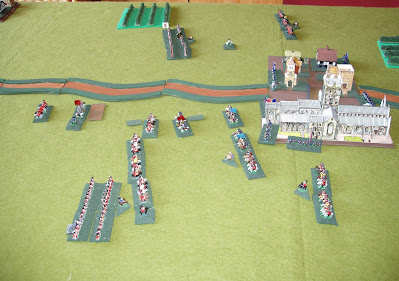 To the east the confrontation between Russian and Swede was across the river and no good came of it, really, for either side.

The Swedes made a number of attempts (in accordance with their ‘attack at all costs’ philosophy) to cross the river, but only a few infantry, under the exacting eye of their king made it. They ploughed into the Russian foot and were repulsed, which would not have been so bad, except that Charles himself was a casualty. On the Russian left Peter redeployed his cavalry to meet the threat from the Swedish horse, counter charged them when they crossed, and routed them. On the other flank, the Swedish horse failed to cross the river and the home guard foot was having the worst of the firefight across the river.

To the west, the charges of the Polish horse destroyed the Saxons. In fact, it was not the hussars that did the main damage, but the conventional western cavalry that punched their way through the Saxon horse and then hit and swept away the infantry behind. The Saxons routed, while the Polish cavalry were scattered all over eastern Germany and western Poland.

Back east, the Danes were quietly working their way around behind the Swedes. Being general-less the Swedes only managed to detach a single cavalry base which charged the Danish cavalry uphill and beat the rightmost squadron, routing it and pursuing. The pursuing Russian cavalry from the clash at the ford got between the Danes and Sweden proper, and the Danish advance stalled (they had no tempo points to rectify matters). Meanwhile, the Poles, rallying most of their cavalry and letting the rest rush off to take Saxony, starting moving assets around the cathedral in case the Russians got any clever ideas. Peter did, and a clash between some Polish horse and Russian foot ensued, but it was indecisive and both sides pulled back. More Poles arrived and offered Peter a treaty, which he refused the first time, but realising that he could not assault the cathedral and hold the flank against the Swedes (leaderless but still a bit dangerous) he agreed and the war was over. 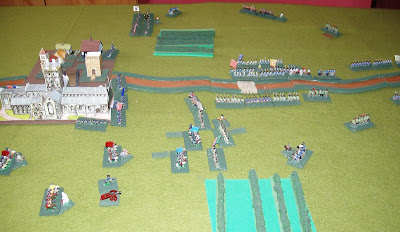 So, you ask, who won? I am not actually sure of the outcome of the real Great Northern War, but I suspect that my winner, Poland, did not come out on top. As it was, the Poles had 20 points, the Russians in a creditable second, had 8. The Danes, who had not managed an awful lot during the whole game, came third with minus 2. The Swedes had minus 6 while the Saxons were the clear losers with minus 27, which is what happens when your whole army routs and you have lost the general.

So, there you have it, an entire war in an afternoon, or, really, three mornings. I suppose in total the game took about three hours to play, and a great deal of fun was had. The decisions in a multi-side games are different and crowd in much faster than a two-sided affair. With only 12 or 14 bases each general had to decide what to leave behind for defence and what to use for attack. Both the Danes and, particularly, the Saxons, let their cavalry get too far ahead of their infantry supports, allowing the cavalry to be stalled or defeated in detail. The Swedes threw too much into the fray initially and attempted something which turned out to be too difficult: crossing the river in the face of the Russians. In Charles’ defense, the Danes did not turn out to be much of a threat. The Poles, of course, stood on the defensive and beat or staved off all comers.

Now, of course, I might be inspired to paint my Anglo-Dutch and Bavarian armies from decades ago and give the War of Spanish Succession a go. Maybe.