The War of All Against All

A few years ago, in those halcyon pre-COVID days when there were wargame shows to go to, I saw a game with a map of western Europe and a few bases of what turned out to be World War One figures thereupon. Slightly closer inspection revealed that it was a game of the opening campaigns of the war, starting in 1914. The scale seemed to be one infantry base to a corps, and one cavalry base to a division. It seemed to be rather a nice idea, although I did feel that the map left something to be desired (not that I could do anything better, of course).

Many years ago now, when the world was still young and I had the time, I wrote an article for Miniature Wargames about using DBR (what can I say? I was young and naive) for running DBA style campaigns. For reasons which slightly escape me, I wrote it about using circa 1700 100 army point strong armies and, after some frantic painting, ran the campaign. I don’t recall much about it except that the Swedes won, and that it was quite fun.

Eventually, these two things coalesced in my addled brain. As I have mentioned, for many years a 100 AP army box of Baccus Poles has languished in my unpainted lead pile. This is not that they were unwanted, it is just that they never got to the top. My entire ancients army collection was painted before they got a look in. However, once my rebasing project got to the Great Northern War, I discovered that I had Saxons, Danes (more or less), Swedes and Russians, with the Poles, as mentioned, grey and still in their box.

Nevertheless, an idea came to me that, as the armies were between 11 and 14 bases strong, I could get them all on my table without it looking too cramped (I am not a fan of overcrowded wargame tables, as my loyal reader might recall). The drawback was, of course, that I would need to paint the Poles.

I am not a fast or good painter, but eventually (and interrupted by a bout of illness) I managed to paint 96 Polish wargame figures and 8 Danes. The latter were because the DBR points system was such that in the original the Danes only got 11 bases, so they obtained an extra base of foot to make them up to 12.

My plan (insofar as it existed) was for five villages, one for each side. A review of figures and terrain, particularly buildings, revealed some interesting things and a total lack of Russian style housing. Now I could have waited until I had purchased and painted some Russian building, but life is only so long, so I did the standard wargamer’s trick of improvising. The sensitive and cultured wargamer may wish to look away now.

This is the opening of ‘The Entire Great Northern War in an Afternoon’. To orientate you, the near table edge is the west, and you can see the Danes to the left and the Saxons to the right. Beyond, in the middle, are the Poles holding the town and the cathedral. The cathedral is, in fact, the spiritual center of the kingdom (which might be Poland, I’m not sure), and whoever holds it can anoint their own candidate as king there. In the distance to the right are the Russians and to the left are the Swedes.

By my standards, this is quite a big battle, with 66 bases and 5 generals on the table. The rules used were my own WotCR rules, available from the link to the right, lightly modified to penalise mounted dragoons and permit Swedish infantry to charge (the famous Ga Pa tactics).

All the figures are Baccus, some of them very old, the rest quite old. I was warned when I got the reinforcements for the Danes that the figures had been redesigned since I obtained the originals. I thought for a moment and then observed that, in fact, they had probably been redesigned twice since the mid-to-late nineties. The buildings are an eclectic mix of very old Baccus, card Hovels, and Leven. The trees are Irregular and the hedges are my normal bocage from Narberth Designs, a long-defunct (I think – I’d be delighted to know they were still going) company. The cathedral is actually St Davids (go on, you recognised it, didn’t you?), a card model obtained from the place itself before even any of the figures were bought. I made it (as I recall it was really fiddly; don’t judge the assembly too harshly) and then didn’t know what to do with it; it is a bit under scale, admittedly (but then Leven’s houses are “smaller footprint”: it makes a lot of sense given the gap between ground scale and figure scale), but I eventually based it on foam and it was ready for battle if I could find a suitable role for it. And here it is, as the central target in the GNW.

So, what happened, I hear you cry (do I?). Well, I’ve nearly run out of words for this week, and I’m not a great fan of dumps of pictures showing the wargame with no narrative, so I’ll leave you with a picture of the situation after the first few moves. 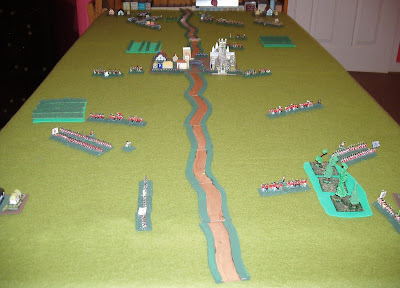