Another Small Town in Bohemia

‘Are you all right Jaz?’

‘Why are they hiding in there? Come out, you cowards, and fight like heretics!’

‘We’re besieging them, Jaz. They’ll come out when they are ready.’

‘And why are we at the back? We should be at the front, ready for the heretic cowards.’

‘We are ready for them, Jaz. It is just that we are the reserve. First, we let the bombards do the talking. Then we either storm the town or we fight them in front of us, there.’

‘Have patience, Jaz. Rome wasn’t burnt in a day.’

Here, as they say, I go again. Or rather, the pangs of slight conscience over the deployment of the besieging Hussites in the last installment but one of the Hooray for Hussites campaign. As you might recall, the Hussite war wagons were deployed on the flanks and failed to do any damage when the German crusaders broke out and over-ran the siege lines.

So, having staved off the pursuing crusaders in the last game (see the Hooray for Hussites campaign page to the right) what else was there for me to do aside from have another go? One of my favourite pictures from the last game is the one of the Hussite bombards opening up on the Leven castle walls; it just makes me smile in fond remembrance. Funny how some wargames do that, and others do not.

Anyway, the set up is similar to the last time, but without the relieving army. The German crusaders are holed up in the town, besieged by Jaz and her Hussite hordes. Actually, that is not the case: Jaz, fortunately for the rebellion, is not (yet) the general. The Germans are about the breakout.

After a move or two, the situation begins to clarify. The Germans are split into two columns, headed by dismounted knights, aiming for the weak points in the siege lines, that is, the bombards themselves. The Hussite wagons, this time, are drawn up behind the siege lines to prevent disastrous breakthroughs, as happened last time. 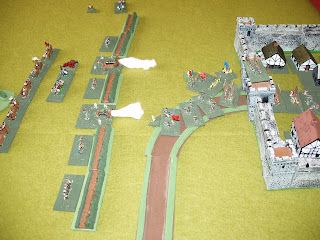 The bombards again proved rather effective at delaying, but not stopping, the crusaders. This might even be historical. In the 1450s the French cannon managed to slow down, but not stop, English attacks at Castillon, and the technology had advanced by then. The Knights overran the bombard positions but then had to deal with the supporting Hussite war-flail wielders. The right-hand column, led by the general, caused their foes to retreat behind the wagon line; the Hussites opposing the left column held on. 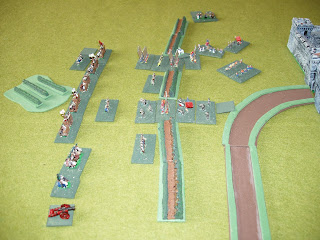 In the end, it went a bit pear shaped for the Germans. The left hand column was stalled by Hussite flail wielders, while the right hand crashed into the leftmost Hussite war wagon, lead by the general. However, when the war wagon recoiled the knights, the general had to roll for harm and managed a six, which mean that he was hors de combat. Without the coordination which the general could have supplied the Germans withdrew. I would not have the tempo points to deploy the columns to tackle the war wagon line and the other wandering Hussite bases, both horse and foot, although you can see that the German crossbowmen, in the distance, have seriously damaged the Hussite mounted crossbowmen.

On the whole, the action proceeded pretty well as I expected. Experience has shown that the war wagons are tough but brittle, but the Germans only had a round or two of combat against them to find out. The loss of the general was, as in several other games with my rules, crucial. Tempo bids are halved under such circumstances, and in a rule set designed to keep tempo, and hence available moves, low, that can mean that the whole army loses it way and can do no more than piecemeal attacks and defend itself.

The Germans can, of course, rationalise the action as a successful raid on the trenches, overrunning the siege artillery and hence delaying the progress of the besiegers. However, I think I now need to rethink their tactics. In the rearguard action game, the mounted knights did a decent job against the war wagon line. Further, the Germans (and Hungarians) do have some firepower, which tends not to be used as the knights insist on having a go first. So the answer might be along the lines of keeping to knights mounted and letting the infantry – pike (spears) mainly – assault the siege lines and wagons while trying to get the cavalry around the flanks. Not losing the general would be an idea as well, but on the whole, I do feel that any assault on the war wagons needs the +1 on the dice that having the general attached gives.

Still, it was nice to get the Hussites out again, and I seem to be getting the hang of handling them. They are such a different army to deal with, even when there are only twelve bases on the table. The Crusaders, while losing quite historically, do need a bit more thought in their tactics. Part of the problem is that historically the knights did not do the most tactically astute things. But part of the problem could also be the tactics that I use. I’ll have to try again, I think.

‘I got the general! With a stone! Weee, bonk! Right between the eyes.’

‘I’ll get you a drink to celebrate.’

‘The stone was guided by the Holy Spirit.’

‘It was a bit like some consecrated host I’ve been given. Totally solid. Here.’

‘Thanks. Cheers. To victory!’