Saved by the Enemy

‘I say, the serving girl is a rather comely wench, do you not think?’

‘What time do you think she gets off? Mind you, she might not mind for a king.’

The bodyguard drew his dagger and quietly placed it on the table.

‘Following orders, sire. The queen was very specific that you were to be prevented from any dalliance along the way to Castilo Al-Hambra. We have them in writing, that any flesh which delays or distracts you must be removed.’

‘Surely you would not stab a working girl just because….?’

‘No, sire. It would not be the girl we would be removing parts from.’

‘Saved by the enemy, eh soldier?’

My loyal reader will recall that Queen Isabella had persuaded King Ferdinand to relieve the Castle of Al-Hambra, and might even be wondering as to what happened next. A simple dice roll decided that the Granadine army, rather than risking an ambush (with a dodgy timetable for arrival) or permitting the Castilians to get to Al-Hambra, decided to fight a defensive battle along the way. After some fairly useless terrain rolling, I decided that the Grenadines would defend a ridge by Ferdinand’s road, and force the Castilians to fight. 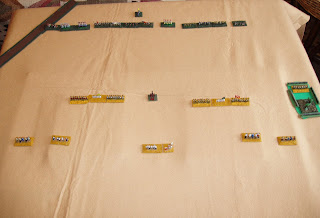 The Grenadine army are nearest the camera, atop their ridge, with an enclosure to the right, occupied by crossbowmen. Their plan is to skirmish with their jinites to left and right to prevent any outflanking while the infantry stay on top of the hills (which you can just make the outlines of out on the photograph) with the general and the cavalry in reserve. The crossbowmen, of which you can see five bases, are newly painted Baccus figures (see, I do paint!), the rest are Irregular, save for a base of Heroics and Ros (three manufacturers on one table, wow! A small prize of internet kudos will go to the spotter of the H & R base from the photo).

Ferdinand’s plan was to demonstrate on his left with skirmishing. Given the nature of the Reconquista, I decided that rather than have crossbowman and handgunners both on skirmish order and closer order bases, I would simply permit both types to skirmish. Given the model of skirmishing in the rules, this seems to work, and the order system can determine which bases are in skirmish order. The main Castilian punch would go in on the right, with two gendarme bases and a jinite, supported by a firepower heavy infantry attack on the Grenadine left.

The next picture shows the battle as it developed, from the Castilian left or Grenadine right. 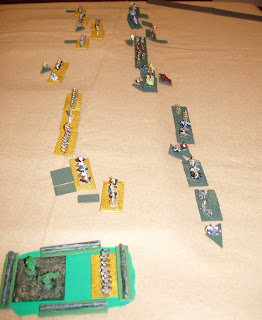 In the far distance, you can see that the Castilian right has taken a bit of a pummelling, with both gendarme bases being recoiled and shaken by some vigorous skirmishing and a crossbow base hitting home. On the right centre the Castilian firepower is starting to make its presence felt, but not without cost as the Castilian spears have recoiled. Nearer at hand, the right-wing Grenadine jinites have been suffering a bit, but in the bigger picture, it did not matter much at this stage as the Castilians were not aiming to push on this flank.

A turn or two later and it has all gone pear-shaped for the Grenadines. 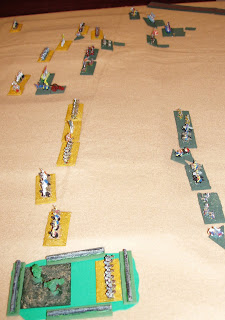 If has to be admitted that the Castilians were lucky. Ferdinand assaulted uphill and got his charge home, rather against the odds. He was held in the first round of combat but thereafter just about edged it. Similarly, the Castilian jinites just edged out their opponents, aided and abetted on their left by some crossbowmen. Still, the Grenadines, although their morale was still good, were clearly overwhelmed and conceded the game, having lost six bases and the general to the Castilian none. The battle, however, was not as one-sided as those numbers imply.

By comparison with Polemos: SPQR skirmishers are very effective in WotCR. I am still pondering why. Firstly, I think that WotCR has a lot fewer tempo points around per base, so making counteracting the effects of skirmish ‘lucky’ rolls more difficult to counter. Secondly, I noticed that the CRT for ranged combat has no ‘halt’ outcome, which SPQR has. WotCR goes straight to ‘recoil’ and two recoils make a shaken. Once a base is shaken, recovery is harder and additional damage easier. So I think I might restore the ‘halt’ status to the CRT, or possibly add a separate skirmisher column.

‘I think we did rather well there.’

‘I think perhaps we should have a little reward, a little entertainment.’

‘What sort of entertainment, sire?’

‘Well, say, did that serving girl accompany the train? I’m sure an hour or two in her company would help me relax. After all, it was my charge that won the battle, you know. Heroism should have its compensations.’

‘What sort of entertainment did His Majesty have in mind?’ The guard unsheathed his dagger.

‘I am sure the Queen’s orders do not cover such eventualities. I mean, Castilo Al-Hambra is more or less relieved. Just a little stroll in the park tomorrow and the job will be done. Just a little, um, amusement, in advance, won’t hurt.’

‘The Queen’s instructions are very specific, My Lord. No such entertainment until you have relieved the castle and returned to her lodgings when she will see to your relaxation personally.’

‘No, sire. I believe we have some soldiers who can play musical instruments and some who can sing. We can order them in for your entertainment. I believe they have been practising a medley of martial airs.’

‘Actually, I think I might retire. It has been a busy day….’