You Shall Not Pass

‘I am afraid I really cannot let you pass.’

‘Do you think you really have a choice, my friend?’

‘But if you join us we can defeat the Romans together.’

‘Ha! The Romans always win, you know that.’

‘Not this time. They are busy elsewhere and also falling out among themselves. You know what it is with Romans.’

‘As opposed to Sarmatians, you mean?’

‘We have never fallen out among ourselves!’

‘In your tribe, perhaps, that is true. But why do you have this sudden interest in invading the Romans and taking their land?’

‘You would prefer us to take yours?’

‘It is too hilly for you. But someone is putting pressure on your land to make you want to move.’

‘Maybe we have chosen to vacate our land so another can graze on it.’

‘And maybe, just maybe, they are a lot more powerful than you. In which case I will need the Romans to protect me!’

‘Since you will not yield, you will fight.’

Looking through my boxes of underemployed toy soldiers, I came up with “something Roman” and what about those Dacians and Sarmatians. The Dacians have been doubled, but the Sarmatians have not, so a big bash was not possible, but they both exist as twenty base SPQR armies. The plan was that the Sarmatians and Dacians clash, using the scenario outlined above. Then, depending on the outcome, the Romans will launch either a punitive expedition or defend their own lands against the barbarians.

The Sarmatians are, of course, all cavalry, or at least, eighteen bases of cataphracts and two of light cavalry. The Dacians are more mixed: fourteen bases of tribal foot, two foot skirmishers, two archers and two light cavalry. Given the disparity of cavalry and the scenario, I decided that the Dacians would be in ambush. Victory conditions would be the Sarmatians getting half or more of their bases off table on the Dacian side.

After the opening moves the game looked like this. The figures are Baccus, the buildings are, I think, Timecast and the trees Irregular. 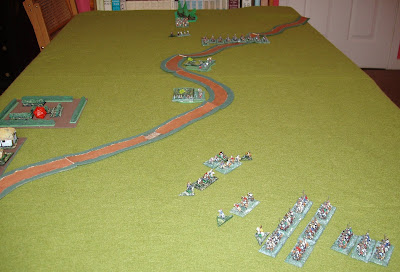 The Dacians are to the left, with nine bases of tribal foot in the enclosures at the extreme left (where the D10 is to remind me of their presence), five in the woods on the far side. The archers are in the marsh to the left of the river (which was a stream given it is summer) and two bases of skirmishers in the marsh on the right of the river. The Dacian light horse has crossed the ford, under command of the general, and is skirmishing with the leftmost Sarmatian column to disrupt it and force it to deploy.

As you can see, so far so good. The Dacian ambush on their left has just sprung itself, five bases of tribal foot rushing out of the woods to assault the Sarmatian right-hand column. The lead Sarmatian light horse is trying to stem the rush.

It has been a while since I have played my own Polemos: SPQR rules and I had to read them carefully. I discovered, for example, that I was a lot more generous with tempo points in SPQR than I have been in more recent rule sets. There, the generals get 5 TP plus 1d6; in more recent rules the generals merely get 1D6, although in both cases the general also get additional personal tempo. I think this speeds the game up. Certainly, in SPQR, the player can get things moving (or removing after a disruption) much faster. I felt, really, that the player has too much control. On the other hand, it does give the player something to do, rather than frustratedly waiting for enough tempo to do something with. I suppose, also, that the WotCR rules are designed for twelve bases, rather than twenty.

There was a good deal of uncertainty in the ranks in the next move or two on both sides. The Sarmatian right (including the general) attempted to charge the Dacian ambushers, and failed. The Dacian right seemed to be about to quell the Sarmatian left with but two light horse bases. However, the Sarmatians seized the tempo in the next bound, the charges went home and, from the Dacian point of view, chaos reigned. 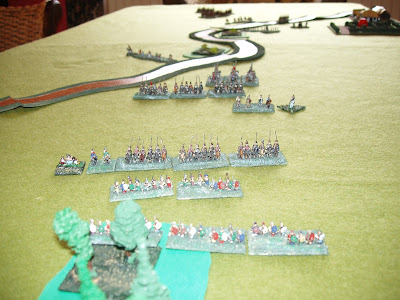 This is the view from the Sarmatian right. The Dacian ambush has been well and truly routed by the first line of Sarmatian heavies. In the far distance, one of the Dacian light horse has been routed by a cataphract charge. The Dacian skirmishers and archers have emerged from their lairs but too late to influence the action. The main body of the Dacian army has yet to jump out of the fields.

In the turn just finished the Dacians managed to lose six bases, and therefore had to roll for morale. This they failed and went to pessimistic status, which means no advancing. The main body, therefore, could not emerge from the enclosures and the Dacians conceded. There was no chance of stopping the right column of Sarmatians from exiting the Dacian side of the table and, given the disparity in strength between cataphracts and tribal foot, not a huge chance of stopping the left-hand column as well. To be fair, the terrain was rather against the Dacians – there was not really enough of it; perhaps I sprung their left-wing ambush too early, but I think fighting the left-hand column with the light horse far on the other side of the river was a good idea.

*
Dubolwhiskos, King of the Dacians, to G. Inand Tonicus, Governor of the Roman Province of Macedonia.

I regret to inform you, your grace, that a tribe of barbarian Sarmatians are set to invade Macedonia.
I have tried to prevent them by persuasion and armed force, but their cavalry was too strong for my men, and they have passed through my lands to yours. I trust Rome for the protection of my people and for vengeance against these savages.