‘So, let me get this right. You want me to fight the Romans.’

‘Without any help from you and your men.’

‘This is a matter of deep regret, my friend, but we are otherwise occupied.’

‘By fighting your brother?’

‘Well, he is sort of my brother. But I have to fight him.’

‘Why? I mean, he is your brother, so you should be on the same side.’

‘Well, there is the matter of the money, my friend.’

‘The money the Romans gave him for fighting us. Which I gave to you. He wants it back.’

‘Well, yes. The Romans want it back too, and somehow they found out you have it. Perhaps they asked him and he told them that I’d given it to you for beating them up last time. But they always come for revenge, anyway, the Romans.’

‘I told you before you invaded that they’d never lose ultimately.’

‘Well, we just have to continue beating them. You have a fine opportunity, my friend.’

Doubolwhiskos, leader of the Dacians, now has to face the might of Rome on his own. The Romans are staging a punitive expedition to his capital, Temeshvekovar, to teach the Dacians a lesson and to recover the money they gave to the other Sarmatian tribe which changed sides in the last battle (but has now changed back). According to the Romans, of course, they are now owed the money from both the Dacians and the second Sarmatian tribe. This is how you take over the world – the Romans could be compared with contemporary global internet companies….

Doubloswhiskos has had time to prepare and has decided on ambush in depth. I suspect that ambushing the Romans is really the only way that tribal foot are ever going to beat them, so it seemed like a fair idea. The set up is below. 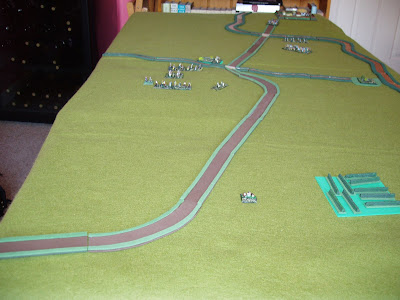 The Romans deployed from march column, very slowly, and attempted to sweep the hill of its defenders with the cavalry while the auxilia deployed. This attempt was not wholly successful as the Dacian light horse resisted manfully, bringing the Roman cavalry to a partial halt, while the rest refused to charge up the hill. Dubloswhiskos moved the archers onto the top of the hill as to fill any attacking Romans full of shafts, and brought the ambushing tribesmen out of cover to peer down the hill at the Roman axuilia and look threatening. 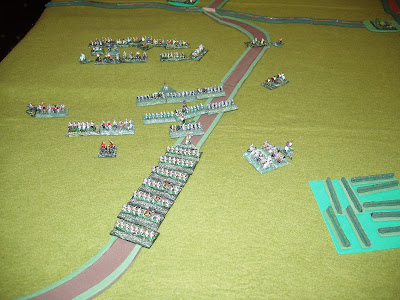 It all went pear-shaped for the Romans. The auxilia were hit by the tribesmen from the top of the hill and the left was swept away, followed by the supporting Roman archers. Dubloswhiskos was even able to recall his tribal foot and reorganise them before the next wave of Romans appeared while the legionaries deployed. He also called up the rest of his foot from across the stream as it seemed that the main fight was going to be on the hill. 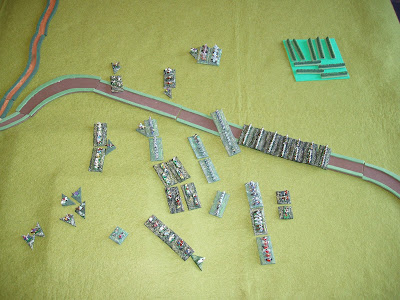 The picture shows the scene a few moves later. The auxilia have more or less vaporised and the remains are being shot to pieces by some good dice rolling by the Dacian archers. The rest of the Dacians are starting to appear at the stream. The Roman’s best chance seemed to be, again, the cavalry. The left wing (nearest the camera) are about to try their luck again up the hill at the Dacian lights, while the right cavalry is aiming to outflank the hill (and has nearly made it). The legion is also nearly in position to attack up the hill Dubloswhiskos’ men are coming under pressure. 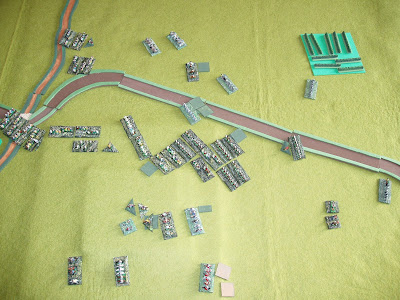 The climax of the battle was, like the rest of it, a bit flaky. The Roman left-wing attacked up the hill and routed one of the Dacian light horse while damaging the other. The Dacian archers disposed of one of their opposing auxilia. The legionaries advanced on the Dacian tribal foot on the hill and started to force them back. Alas, on the Roman right the outflanking Roman cavalry incautiously strayed into charge range (albeit across the stream) of the Dacian foot. Charged they were, and, even across the stream, fluky Dacian dice rolling (and being taken in flank) led to them fleeing. At this point, Roman morale was at 1, the cumulative effects of the casualties among the auxiliaries. They were, therefore, forced to withdraw.

The figures, incidentally, are Baccus, the buildings Leven and old Baccus. The rules were Polemos: SPQR. I confess to having rather ambivalent feelings about these rules, which is OK because I wrote them. I had to look at the date of publication before I realised that I wrote them over a decade ago, and it would seem that my thinking has moved on a lot since then. While I still think that they model the Romans versus tribal armies interaction very well, I do admit that they do not flow quite as well as I would like. I don’t know why I felt that this time, as opposed to the last outing. I fancy an informal fast play version might be on the cards.

‘I told you you could beat them, my friend.’

‘Well, of course, we could beat them. I’d just rather not have had to try. Can’t they just go away and leave us in peace?’

‘That would not be the Roman way, my friend. Now, I must go and instruct my brother in the ways of modern warfare.’