The Battle of Mount Grace

We have chased the Spanish out of Northallerton and are pursuing them towards your fort at Ellerbeck. I hope to meet you at the bridge where we can chase these invaders out of your country.

As the loyal reader may recall, the Armada Abbeys campaign has been going for quite a while, and I suspect it is nearing a resolution. A full recap of the story so far can be found on the page from the link to the right. The Scots have just beaten Don Carlos’ army at the battle of the Friarage and are in pursuit. The English are marching north from their camp at Thirsk towards their fort at Ellerbeck, near the ruins of Mount Grace Priory, a Carthusian Charterhouse. The fort was established, you may recall, to control the junction of the Northallerton, Thirsk, Yarm and Stokesley roads, after a brisk light cavalry action. It actually interrupts communications between Don Carlos’ army to the west, and Don Pedro’s Spanish army which is currently based at Stokesley.

Don Carlos thus has a problem. He has to delay the Scots while fighting his way past the English fort and any reinforcements that might arrive. However, Don Pedro is on the march to cover his retreat, so all the armies are likely to meet at Mount Grace. 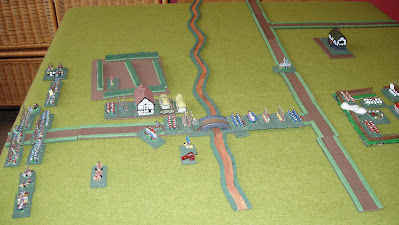 The picture shows operations a few moves into the game. The Spanish of Don Carlos have had four moves to start getting over the bridge and have come under artillery fire from the English in the fort. The rearguard of light horse, nearest the camera, skirmishers in the field and an infantry unit in the village are rather nervously watching the newly arrived Scots.

The English will approach from the road nearest the camera, while Don Pedro arrives along the road to the top right, which is also the escape route for Don Carlos. The buildings are mainly Leven with some Baccus hovels, and the bridge is Leven. The fort is Irregular’s Roman Marching Fort, which seems to turn up in a lot of my games. The Scots are Baccus, the English and Spanish are Irregular.

For a while I wondered if I had the balance of the game right. The Spanish rearguard held off James’ men for a while. The Scots musketeers, you might remember, have got quite a good reputation in this campaign, and I assaulted the village with them. Musketeers against pike is not great odds. The light horse and skirmishers also managed to hold off their foes. Meanwhile, the rest of Don Carlos’ men were moving past the fort with relatively little damage from the artillery or musketry. Don Carlos, it seemed, was going to get away. 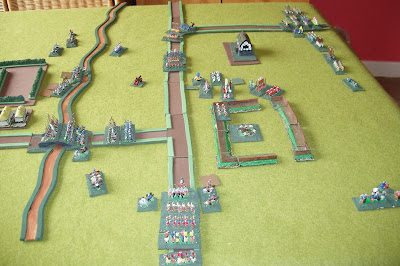 The Scots, however, stuck to the task in hand and disposed of the Spanish rearguard, crossing the stream in numbers at the bridge and also attempting crossings further north. Don Carlos sent his gendarmes to block the Scottish cavalry getting astride the junction before his infantry got there. The main English and Spanish armies have arrived, Don Pedro’s men in battle array while the English have their Border horse on the right, the rest being on the road. The English in the fort have sallied out, in an unsuccessful effort to prevent Don Carlos’ infantry from getting away. However, to further delay them, Don Carlos has charged the pike with his demi-lancers and pushed them back.

It went a bit wrong for Don Carlos, then, and Don Pedro’s arrival did not really help that much. The English rearranged their pike and had another go at Don Carlos and his cavalry, holding them on the first turn of combat. The Spanish were then hit in flank by a base of Scots musketeers and destroyed. Don Carlos had to dice for his fate and also was lost. By this time his army had lost seven bases and the general, thus being minus nine (out of twelve) on the dice. A morale check gave them a withdraw status.

Don Pedro tried to deploy his cavalry to cover the retreat of Don Carlos’ infantry, but lost his light horse to a charge of Scots cavalry. By this time, however, most of Don Carlos’ men were in sight of safety, and it would take King James time to organise another attack. The English were about facing to deter assault from Don Pedro’s left, while their Borderers had disposed of the flanking Spanish skirmishers and were now engaging the left-wing musketeers, albeit without any success. 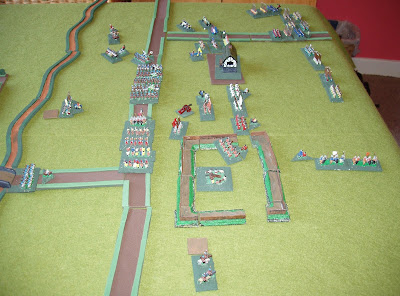 The upshot of the game is, really, that Don Carlos’ army has ceased to exist, having lost five bases at Northallerton (I restored them for this game) and another seven here. The remnants will be combined with Don Pedro’s men and fall back to Stokesley.

Someone once commented that the problem with narrative campaigns was that they do not have an element of surprise. When I fought the cavalry battle at Mount Grace, I had no idea that the fort thus established would have such an influence on the course of the battle. The story of the campaign seems to have rather taken over.

I write to inquire as to the whereabouts of Don Carlos, my friend, who is missing after the battle, last seen bravely engaging pikemen. I would be glad to know his condition, if alive, and if he has gone to meet his maker, I should wish to receive his corpse for return to his family in Spain.