As my loyal reader will be painfully aware, this blog is always well ahead of the curve in wargaming fashion. As a trendsetter, of course, I have been banging on about the importance of sieges and siege warfare in the pre-rifled artillery era for years, largely to the indifference, amusement or occasional argument from anyone who was misguided enough to listen (or read) what I was saying.

Battles, therefore, are at the forefront of many, if not most wargamers minds. However, as with the Western Front in the First World War, things might be changing a little. The two, that is siege warfare and trench warfare, might, in fact, be part of the same phenomenon. You can regard the period from, say, 1915 to early 1918 as an extended siege, on a very large scale.

That is not quite the point here. What I am failing to say very clearly is that early modern sieges and First World War trench warfare have both been regarded as being fairly unwargamable in the not too distant past. This is not due to a lack of information – Duffy’s books are excellent and the quantity of stuff on the First World War is huge. WWI figures were a little in short supply, but the recent centenary has fixed that in toto, although I do recall Airfix had a load of figures decades ago.

I think the problem with both eras was simply the scale of the operations. A Marlborough age siege was big, particularly if you have the full set of outworks, lines of circumvallation and so on. Similarly, First World War battles were huge and an individual soldier’s contribution, or even his unit’s efforts, were a little marginal to the overall result. As noted, the time scales were also lengthy – months, in both cases, and the outcome was often decided by boring bits which wargamers tend to ignore, like disease, logistics and the weather. All in all, the decision to avoid sieges and trenches seems entirely rational.

Things change, however. The advent of 2014 heralded some wargame rules which could cope with the large scale, full-blooded slaughter of the Western Front. I am not sure that the period is for me, but the rules do seem to work and to give a reasonable account of the action along the way. And now the internet is alive, or at least one or two blogs I follow have mentioned it, with the advent of the Vauban Piquet based rules for siege wargames in the Age of Reason.

It is not my intention here to review the rules, largely because I do not possess them, or any others in the Piquet series. This is mostly due to parsimony rather than dislike, although the demonstrations of Piquet rules I have seen do seem to have rather a large quantity of clutter and ‘gismos’ on and around the table, which I dislike (I’m sure someone will correct me if I’m wrong, I speak from ignorance). The cost is a bit prohibitive, and I take my hat off to those who have invested in the said rules.

Anyway, I am resisting the temptation to say ‘I told you so’ to all those wargamers who doubted the importance of sieges, and want to bang on about the importance thereof again, which I will do in a moment. In the meantime, to show my own commitment to the siege cause, I have been working on some trenches and gun emplacements. 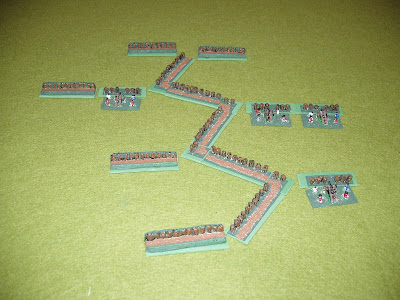 What you can see here are five old resin Baccus trenches, which I finally got around to painting, five handmade trenches, made with plastic card and gabions from Perfect Six with four corners, and four gun emplacements, manned by four Baccus WSS siege guns. I could have plastered the front of the trenches and corners with polyfiller to represent piled-up earth, but a quick assessment of my modelling skills decided me against any such effort. Painting and glueing eighty gabions was quite enough for me.

I also know that the angles of the corners increased as the saps approached the outworks, to prevent the trenches being flanked. I decided that was a refinement that could wait until I had some experience with sieges, and when I had more gabions. You might also have noted that something is missing in the picture above, to whit, the target fortification. Have patience. I already have a castle and a set of town walls, and a star fort is in procurement.

I have also realised that a star fort, and the besiegers thereof, will need a large artillery park. I have therefore been reviewing my assets (Ooh, err, missus). I appear to have seven Heroics and Ros guns, with two gallopers, and thirteen naval guns from Langton (with some crew), and two guns, I suspect from Baccus, although crew might be a bit lacking. A star fort seems to need at least two guns per bastion, so I think I have sufficient artillery. Just.

That does raise interesting questions, of course, about the cost of the fortifications. Ships of the line were a large investment for the early modern state, at least in part because of the quantity of artillery they had on board. If you think about some of the early modern ships of 40 – 100 guns, it means that quantity of cannon per ship, which is a lot in the age before industrial standardisation. And the British and Dutch fleets had hundreds of vessels at some points.

It cannot have been that different with forts. Some of the material would have been local, and the labour to build the fort might have been procurable, but the number of man-hours was significant, I should think. Even forced labourers require feeding. Then magazines need filling and artillery mounting – naval gun mounts are more popular on forts because the cannon do not need moving about as much and the recoil can be absorbed by the fort structure itself, as it is on a fighting ship.

So, there you go. My contribution to wargaming sieges is underway. I might have to think of some rules soon, so I might have to reread Duffy. But that is a pleasure rather than a labour.