‘We are. Why are we running away from those heretics.’

‘Um, probably because there are a lot more of them than us.’

‘With the help of my God I can leap over a wall!’

‘Right. Right. Can you leap over squadrons of knights who are all out to kill you?’

‘My Lord is my strength and my shield.’

‘Good. Now, we can do the strength and shield thing from the heights over there. Plus we can roll things down on the, um, heretic knights and throw things at them. From our advantage.’

‘With the Lord on our side we need not the advantage.’

‘Well, lets not tempt the Lord too much, hey? I mean, he might have put that hill there just for us, you know?’

It became evident that a wargame was becoming necessary. The Estimable Mrs P can observe that the painting mojo is slowly diminishing, and I have enough experience in wargaming life to know that the way to cure that is to have a wargame, which is, after all, the reason I do the painting after all.

So I stuck a few more sails on the Anglo-Dutch wars ship and left them to dry, while I consulted Mr Thomas’ book for a scenario. I mused that I had not had the Hussites out for a while. As the regular reader of the blog will be aware, I like the Hussites. They are such a different experience of an army. They also give me the opportunity to make complex theological jokes which will, no doubt, pass the loyal reader by, theology not being a medium which lends itself easily to jokes, although a few brave souls do attempt humour in the subject.

Anyway, a quick search turned up a range of Hussite battles. While they won most of the early actions, largely due to the ‘heretic knights’ not really believing that the peasants would do them in, the later actions were a lot more difficult. This is partly because the Hussites split into factions, like any decent victorious revolutionary organisation. It is also partly because of the strategic situation – the Hussite started raiding the surrounding lands and, as with most raiding expeditions, found themselves either pursued or blocked off from returning home by an irate army.

Bearing that in mind I perused One Hour Wargames and came up with the scenario whereby one army has to cross a river a seize a hill to resist their pursuers, who outnumber them, from. This seemed to be tailor made for a Hussite raiding party.

The starting positions from my interpretation of the scenario are below. 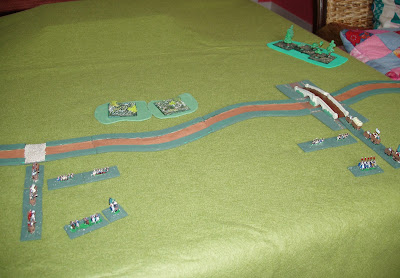 The Hussite aim is to cross the river and set up defensive positions on the hill on the far side. The Imperialists arrive on turn two and their aim is to capture the hill. The Hussites have 12 bases, the Imperialists 16. The rules are my own (from the link on the right, if you are interested), and the figures are mostly Irregular, although I think the Imperialist crossbowmen are Heroics and Ros.

There were some critical incidents in the battle, and it was rather close. The Hussite general was deployed with their light horse which got charged by two bases of German knights. That was the end of the general and the mounted crossbowmen, and I thought the Hussites were toast too. However, given it was the Hussites and they had clear orders, they continued with the plan, just a bit less flexibly. The charge of the knights probably assisted them, as it delayed the pursuit for the Hussite left hand column. 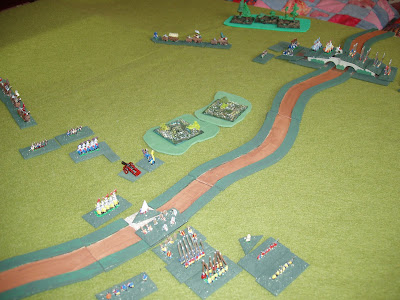 The situation continued. The German knights on the right got hit quite hard by fire from the Hussite warwagons and failed to rally, while eventually the German spearmen on the bridge managed to force back the Hussites sufficiently to start to deploy.

By then it was too late, the warwagons were deploying on the crest of the hill. The Hussites had reached safety. With the heavy fire the warwagons can put down, plus the advantage of the slope, it is unlikely that the Imperialists will get much further.

The Hussites were not unscathed, of course, having lost two bases and the general, while the rearguard base might struggle to regain the wagon lines.

The result seems to be fairly historical. The Hussites usually seem to have got away, but with quite heavy casualties. The problem with war wagons is that they are excellent in defence, but much harder to use in attack. That seems to be reasonable. For the Imperialists, the knights are very powerful but not unconquerable. The infantry rarely seems to get a look in.

I admit to some rule mistakes here. The Imperial cavalry hit the Hussites at the bridge at full force; they should have been shaken by the terrain. Similarly both sides crossed the ford and bridge with no disruption. On the other hand, the Germans formed into column for passing the river without penalty. I am still not sure if I treated the leaderless Hussites properly, either. They did have clear orders and I stuck to them. The counterattack at the bridge was very limited and local, so it seemed reasonable (and the Hussites had the tempo for it). Lots to ponder.

‘We soared on the wings of eagles.’

‘It was a tough pull up that slope, I can tell you.’

‘Our Lord is a mighty fortress, our rock on whom we stand firm.’