The Battle for England

As you might have noted over the years, my aspirations and efforts have tended towards the more megalomaniac. At least I stick to wargaming rather than moving real soldiers around the place. Anyway, after the success of the GNW in an afternoon a while ago, I thought it was time for another go, especially as I had a bit time for a major wargame.

It did take a bit of thinking about. Originally I was planning to include Scotland and Ireland as well but, fortunately for my sanity, I realised that was not going to work. Eventually I opted for four armies a side. The Royalists had Oxford, Cornwall, York and Chester based armies, while the Parliamentarians had London, Bristol, the Eastern Association and a north-west army. Each army consisted of six infantry bases, six cavalry, one dragoon and one artillery base.

The set up was fairly simple. The Pennines were represented, as were the Chilterns, Cotswolds and Welsh hills (just). A few wooded areas were scattered about the place as well. The Parliamentarians had an extra three infantry bases in London, representing the trained bands. The Royalists had an extra general, representing Prince Rupert who often acted as a sort of general-without-portfolio, it seems to me. If I deemed it necessary (i.e. if things lagged a bit) the Parliamentarians could introduce the Scots marching south, while the Royalists could land Irish foot at Chester.

It is a bit difficult to get the whole set-up into a photograph, but here goes.

This shot shows London in the near right hand corner, Oxford in the middle and Bristol on the left. The Cornish army is lurking on the extreme left. Further north in the middle distance you can see the Parliamentary midlands force with Chester and the north-western Royalists behind them. On the right north of London is the army of the Eastern Association with the northern Royalist army beyond them around York.

I confess to making at least one conceptual mistake with this game. When I did the GNW I fought it as a single battle, not as the whole war really. Here I could not decide whether I was doing the war as a whole or the whole was a single battle. Also with the GNW I had a points system for who won, whereas here I just vaguely had the idea that the Royalists had to capture London and the Parliamentarians to capture the King.

I also had a few problems with the command system. Originally I rolled for tempo points for each army, but that was a bit confusing with eight of them. Then I combined the rolls into one, did the bidding and used the rest for orders. That meant, for the Royalists especially, a feast of tempo for ordering units around which was a bit of a problem. So I had to abandon that and just roll for who got the tempo. This clearly needs a bit more thinking about for big battles.

I also vaguely had the idea that in order to capture a garrisoned city the besiegers would need to bring up their siege gun. I also abandoned that as an idea. As the game progressed there was also less involvement from the field artillery and dragoon elements. Perhaps in a wargame this size these aspects just would not work usefully. Again, some further thought is necessary before having another go.

Anyway, doubts, conceptual infelicities and errors on my part aside, it was very interesting. Just setting the game up brought home just how vulnerable Oxford was strategically, more or less surrounded by enemy forces. I did a lot of pondering as the Royalist general as to how to break out, and as the Parliamentarian as to how to exploit the position. The aim of the Royalists was to break out in one direction or the other. As Parliamentarian I focussed on capturing Oxford (after all, the King was there) while simply holding off the York and Chester Royalists. 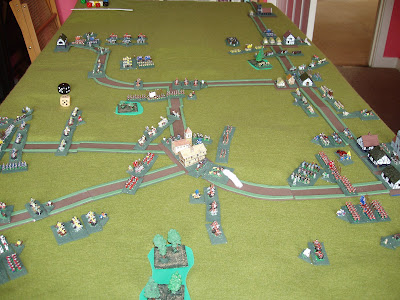 The picture shows the developing strategies. The Cornwall Royalists are advancing to support Oxford. Rupert has taken some Oxford cavalry to try to break out to the north-west. The North-west Parliamentary army has split, half to delay to Chester Royalists, the rest moving south. The Eastern Association is similarly splitting, half to oppose the York Royalist, the rest moving into the Midlands around Newark. The London army is moving forward to threaten Oxford from the east and south.

It went a bit pear-shaped for the Royalists. Rupert’s cavalry were destroyed by a cavalry charge by the Bristol Parliamentarians. The Eastern Association cavalry administered a mauling to the York Royalist cavalry, forcing them onto the defensive. In the North-West, the Royalists were on the whole successful but they were delayed by the half army deployed against them. 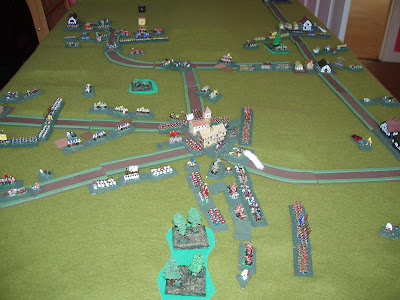 The end of the game is above. The Cornwall Royalist cavalry has been half-destroyed by the Bristol forces, forcing the reinforcing Cornish infantry (white coats) to move back to cover the hole. The London army is administering a bit of a bashing south of Oxford, while a combined infantry and cavalry attack over the Chiltons is pushing the Royalists back into the city. To the north another infantry attack has got into Oxford itself. To the north the York Royalists are on the back foot having had most of their cavalry defeated. The victorious Parliamentarian cavalry can be seen in the Midlands moving towards the north-west, which is the only place where the Royalists have been at all successful.

In spite of the problems I outlined above, it was a fun and interesting game. I am considering another go, with a bit more parochialism for the armies built in and a different command and control system (or, maybe, spend the time trying to streamline what I already have). After all, the Parliamentarian cavalry reinforcing the north-west came, originally, from London and the Eastern Association. “New Model Army? We don’t need no steeking New Model Army….”

Perhaps the size of the battle is just too big and I should have resorted to map moves and narrative. Or perhaps I should have called to cities different things and just abstracted everything else away. I am not sure.

It was, as I said, fun, and kept me occupied over three wargaming sessions. The Royalist cavalry was unlucky, going down to two separate 6-1 rolls west of Oxford. It was also nice to get more or less every ECW figure I possess out – I think there are 114 bases on the table, plus eight generals. It is a bit crowded in the south, admittedly. As I said, it probably needs a bit more thinking about.