How to be a Roman

My attention has slowly been turning back to the Romans in Britain. Actually, I am reading a very interesting book about the Roman invasions of Britain, and what we can actually know about it (‘not much’ seems to be the conclusion). I will almost certainly return to the tome when I have finished it, but, in the meantime, an itch for some Romans in action seemed appropriate.

As my loyal reader might recall, I have done Caesar’s first campaign in Britain, and so his second was an option. On the other hand, Jules got a bit of a pasting there (apparently, a Roman poet wrote of Caesar in Britain ‘He came, he saw, he ran away’; ho, as they say, hum). So I thought it might be a nice idea to let the Early Imperialists have a go. After all, in the Sarmatian Nation games they have received a bit of a pasting, due mainly to bad generalship than anything else. At least Jules could argue that without cavalry he did not stand much of a chance.

Anyway, I flipped through the One Hour Wargames book and found scenario ten, which seemed to fit the bill. Here, an army is advancing along a road while the opponents try to delay them until the rest of their army arrives, on turns five and ten, respectively. The objective is to take and / or hold a town.

I confess I rather prefer my own rules rather than those in the book. I am a solo gamer and like things to develop slowly, with much sitting around contemplating the situation while sipping coffee. I suppose rules reflect the writer, and so my rules have fairly slow movement by comparison with some, and combat is not that effective. In ancient warfare there does seem to have been a great deal of hanging around waiting for something to happen. The rules, should you be interested, are available from the ‘Rules’ link to the right.

I recall from reading Goldsworthy’s The Roman Army at War that what tended to happen when some uppity natives rebelled against Roman rule was that the local commander gathered what troops he could and set off immediately to nip it in the bud. Often, I surmise, this was successful and nothing more was heard of the rebels, as they had already gone home when the army arrived. Sometimes, however, the local army got itself ambushed and received a good thumping, necessitating the Romans gathering an even bigger army to go and crush the rebels. This is the sort of arc which both the Jewish revolt followed and, so far as we can tell, the Boudiccan revolt.

So, the plan for the game was the Roman army advancing along their own road to take a native British town which is the centre of a rebellion, while the Britons, of course, try to prevent this. Initially the latter had three bases of chariots, three skirmishers and one light horse on the table, reinforced on turn five by two light horse and five tribal foot, and on turn ten by six more tribal foot. The Romans, initially on the road, advanced with a light horse base up front, followed by three cavalry, five auxilia, two bows, seven legionaries and then two cavalry bases as rearguard. Both sides totalled twenty bases.

As I said, things developed slowly, so the early photographs are a bit boring. The British lights of various sorts forced the lead Roman cavalry and general to deploy, but otherwise failed to delay anyone, and the Roman column proceeded sedately up the road towards the town, probably collecting British javelins to use as firewood later. 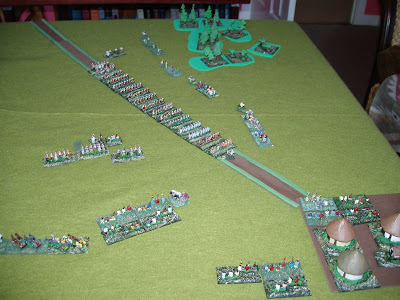 The picture shows the situation on turn 10, when the second tranche of Celtic reinforcements have arrived. The Celtic chariots have caused a little delay now to the Roman cavalry, but the light horse and the skirmishers have managed nothing so far against the infantry column. The first tribal foot are moving towards the Roman cavalry, which may or may not be a good thing, while the rest of the tribal foot, newly arrived, and reinforcing the town defenders and about to move forward against the column.

It all went rather pear-shaped for the Romans. I really should have moved the general across to deploy the infantry, but he was tied up with winning the tempo to charge the British foot (which they refused to do). The British foot sensibly refused to charge the Roman cavalry the first time, but went in when the chariots had produced a recoil result which left one base in range and isolated. A bad Roman dice roll meant they fled.

The march column incautiously moved within charge range of both the town garrison and the newly arrived tribal foot. Furthermore, the column started to take disruption from the British skirmishers and light horse. The head of the column stood no chance against the chargers, and fled, this causing a domino effect down the column until the first point where the skirmishers had achieved a halt result, there being a gap in the lines there. 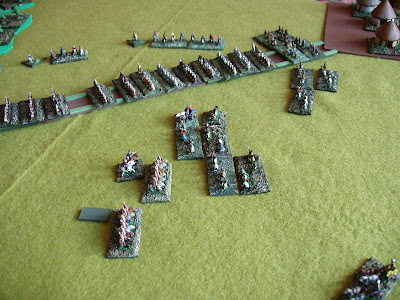 The picture shows the end result. The front nine Roman foot bases are routing. Added to the one cavalry base routing off picture to the left, and the Romans are ten bases down, leading to an army rout result.

I suspect the Roman debacle was probably my fault. I was concentrating on getting the Roman cavalry into a position to charge the chariots, but the tempo point never let me and the Britons always managed to skip away out of range. The result was that I was unable to deploy the infantry, with predictable, disastrous, results. The front of the column, incidentally, was auxilia and so did not benefit from the legionarie’s extra tempo point.

I seem to have got the British tactics worked out, but this is not the first time that the Romans have struggled against tribal armies (there was a Dacian action as well). Skirmishing tactics can be very slow, but the disruption they can cause can matter. Interesting….