‘So, the treaty is signed and being run from Paris to London via Calais?’

‘Yes, sire. The ambassador is on the move as well. They will pass through Arras soon.’

‘We need to intercept them somewhere along that route.’

‘Yes, sire. But the route is largely unknown to us. We could do to scout it out.’

Well now, a change of pace is on the cards. I recently rediscovered my stock of 25 (plus) mm English Civil soldiers, including, rather to my surprise, a dozen which had been painted to an acceptable standard. I suppose a caveat is relevant here: there are several dozen which are not.

Still, a bit of basing (along with some chariots and the mysterious blot shooters from a post of two ago) and they were ready for action. I have been playing with 6mm toys for many years. The biggars came as a bit of a shock.

The basic idea of the game was two-fold. Firstly, to see if I could sketch out some acceptable skirmish rules in a few minutes without getting bogged down in detail. With a bit of cribbing from Mr Berry’s Once Upon a Time in the West Country that was accomplished without too much pain and suffering.

The second aim was to move the Corbie campaign along a bit. As I mentioned, after Corbie fell in real life, the French and English negotiated over a treaty against the Spanish, which nearly, but not quite, happened. There was a draft treaty but by the time the details were hammered out the French military situation had stabilised in the north-east and they no-longer felt they needed it.

The conceit here is that Louis XIII and Richelieu signed the treaty and entrusted it to a group of ambassadors and their guards to get to London. The Spanish, having recently taken Corbie, would naturally like to stop the copy of the treaty getting through. The first opportunity is by cutting the Arras to Calais road.

The next conceit is that the English government, under Charles I, desperately wants to treaty to be enforced, for domestic political reasons. Essentially, by signing an anti-Spanish treaty Charles would get a lot of Puritan opinion off his back (and probably prevent the civil war). Thus the first skirmish action is between the group of Spanish scouts and two parties of English who are attempting to keep the road along which the treaty and ambassador must travel open.

The terrain was very simple – I do not have much big stuff. The roads runs north to south, along which the English pass, one group of three from each end. The other road comes from the east and the Spanish appear from them. The aim of the English is to clear the road, of the Spanish to hold the house to cut it.

I had to do a bit of experimenting with the camera to get any pictures at all. Finally, I hit on macro mode with the flash off and the camera on its tripod. The Spanish arrived four moves before the first parts of English and just about got to the house first. 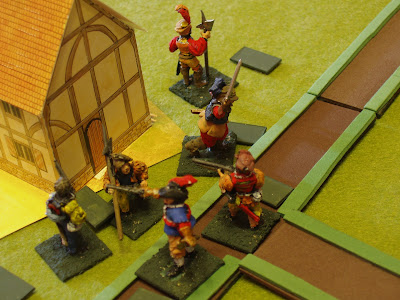 So far as I recall there are a couple of Redoubt dismounted ECW cavalry above, and the rest of Landsknechts from an unknown manufacturer, probably Foundry before they went to packs of eight. The English, when they appear, are, I think, Outpost Border Reivers, but they do not seem to sell that range any more, which is a pity. The house is from the Usbourne Medieval Town, in 20 mm but it looks about right.

Anyway, the Spanish with muskets dismounted and took aim at the first party of English trotting down the road towards them. The small rectangular markers indicate who is mounted, by the way, because I was too much of a cheapskate to buy mounted duplicates (and still am, some things don’t change). The mounted Spanish pistolier also took aim and, by a miracle of rolling they managed three hits between them on the lead English rider. He also fell off his horse and so was rendered seriously hors-de-combat in a moment.

This left the dismounted Spanish unloaded, of course, and so they were charged by one of the remaining English horsemen, while the other took on the pistoleer. Remarkably, the foot managed to beat back their foe, although one of them was wounded, and another mounted Spaniard took over the combat, allowing the unwounded musketeer to start reloading. 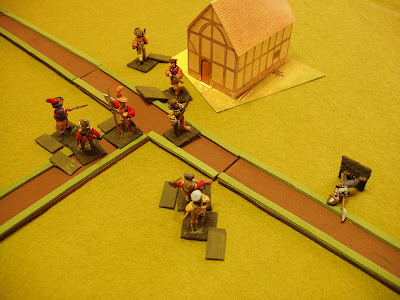 The combat between the third Englishman and the pistoleer was interrupted by another Spanish cavalryman who attacked from the flank. Meanwhile the remaining English, the party from the south, had appeared and were cautiously circling the house, aiming to cut the Spanish line of retreat.

The unequal fight at the junction could not last much more and eventually the brave Englishman was downed. The southern English party had deployed into line looking for the chance to charge and sweep away the Spanish blocking the road, but the mounted Spanish formed up into a similar formation and, after the discharge of a crossbow (which missed) the English decided that retreat was the best option. The remaining member of the northern party broke off from his combat and joined them in the retreat. 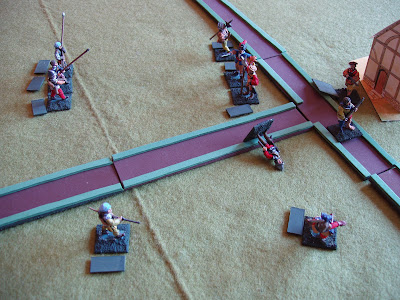 The strange colours in the photographs are due to differing light conditions (that’s my excuse, anyway), but a good time was had by all. Now the French have the problem of clearing the road to Calais for the ambassador and the signed treaty, and I have the problem of needing to paint some more big toy soldiers….

‘The French will be a bit unhappy about that.’

‘Yes, sire. So will the English. We have two badly wounded Englishmen to deal with as well, but they seem to be doing well on a snail diet.’

‘A French delicacy, sire. Actually, they have rejected the snails but we are feeding them English beer so they seem happy enough.’