‘For the state, ma’am, he recommends establishing Dunkirk and Ostend as privateer bases.’

‘Also, he suggests not assaulting the rebel’s fortresses any more.’

‘Really? What are we to do instead. Madrid will not be happy with the answer ‘nothing’, you know.’

‘No, ma’am. He does not suggest nothing. We should use the ships from the armada, and the troops, to outflank the rebels from the sea, cut off their maritime trade and seize the undefended islands. If we can fortify the towns on the islands, then they will have to come to us while we throttle their trade.’

As any discerning wargamer of the Seventeenth Century will know, the Hispano-Dutch wars, once it resumed in 1621, got bogged down in sieges, and no-one really got anywhere. The real action was at sea, both in the Narrow Seas (much of the Dutch trade was, in fact, with the Baltic) and also world-wide. With the East- and West-Indian Companies grabbing trade and trading posts across the Americas and the Indies.

According to Hugh Peter’s account in his pamphlet (‘Digitus Dei. Or Good News from Holland’ p 157-172 in Randall, D., English Military News Pamphlets 1513-1637 (Tempe, Arizona: ACMRS, 2011)), Spinoza left exactly that above suggestion in his will to ‘the Infanta’, Archduchess Isabella, co-ruler, ruler and governor of the Spanish Netherlands until 1633. Again, according to Peter this waterborne assault took place in September 1631 by over eighty Spanish ships. The Prince of Orange, Frederick Henry of Nassau had already retreated from his invasion of Flanders (possibly aimed at Dunkirk, but that might seem a little ambitious) and was forced to dispose of his army against the sea threat, and also launch a naval effort against the incoming fleet.

It all went wrong for the Spanish, many of the sips ran aground in a mist and the whole seems to have been a logistical nightmare. Hugh Peter, of course, acknowledges that the defeat was from God.

Never being one to pass up an excuse like that for a wargame, I pondered my naval assets. Peter actually provides a fairly useful list of troops, sailors and ships (as well as other equipment) which came to 3274 soldiers of all ranks captured, 855 sailors (out of 6000 who left Antwerp). Peter also lists 62 vessels captured although not all of them were warships; the ammunition ships are listed as carrying powder, beer and ‘Deals’, which might be planks or wine.

The geography described by Peter is confusing, at least, it confused the socks off me and, of course, modern maps are fairly useless as a great deal of draining has occurred. The landscape (seascape?) even seems to have changed between 1630 and 1660 as the engineers got to work. So I gave up the idea of a precise reproduction of the events, and went for something ‘inspired by’ them.

Further investigation of my small craft indicated two slight snags in the plan. Firstly, I did not have very many and secondly, the ones I did have were poorly painted even by my low standards. Two of the brigs, for example, had no paint at all applied to one side. Having sworn off Hallmark Miniatures, I was at a bit of a loss until I recalled that Tumbling Dice have assorted ranges in 1:2400, and an order was placed and swiftly despatched. I set to to paint somewhere around fifty craft – being a solo player means you have to have sufficient for both sides. However, it turns out that simple paint jobs on ships are nearly as easy as buildings, and the whole project was only delayed by a fortnight or two.

I did have to invent some terrain. The problem is that at 1:2400 scale, a six-foot-tall human is about 0.83 mm tall. Thus the edge of a piece of felt could be a six to eight-foot cliff. Further, no-one seems to do any buildings in 1:2400 scale, a problem which I have encountered before but not solved. So some imagination was required.

After a few moves, the table looked like this. 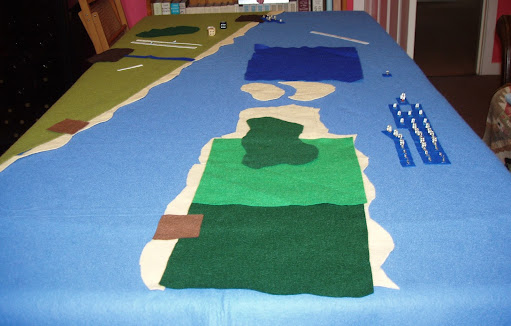 The Spanish are sailing from the near edge of the table, in a lump, headed by a ‘hulk’ flagship. Their aim is to capture the two villages to the left, the little brown felt squares. This will interdict maritime traffic from Bergen, in the distance, from which you can see the Dutch starting to emerge. The pale bits are sand-banks or dunes. The dark blue bit is the ‘danger area’ where unwary ships entering are likely to run aground. There is a channel or two through the dunes at the end of the island, through which some optimistic Spanish ships are aiming to pass.

You can also see that there is more clutter on the table than I usually like. These consist of a wind direction marker, a weather tracker (I had, after all, to give a chance for some mist) and a turn tracker, to keep an eye on the tides. The weather rules were nicked, incidentally, from Charles Wesencraft’s ‘With Musket and Pike’.

The main clash of the fleets was in the restricted waters to the starboard of the island. The table edge, of course, was the other shore, and the Dutch landed up being rather pinned against it. 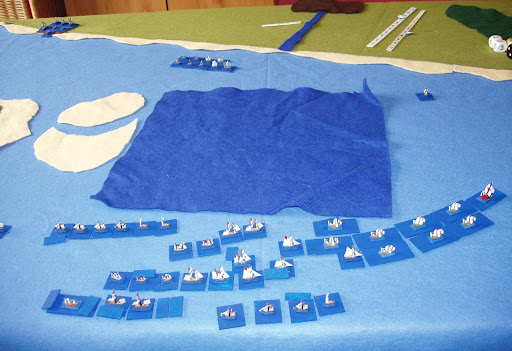 The Dutch, under their admiral the Prince of Orange in the leading galleass split into two to shoot up the Spanish who sailed obligingly between them. However, most of the Dutch ships lost out in the artillery duel and the port squadron (nearest the camera) was forced to sheer off and ran aground, at least in part. While receiving some damage (you can make out the markers if you look) the Spanish sailed fairly serenely on. In the top left of the photograph, you can see the flying squadron has taken one of the villages with consummate ease, the relieving Dutch squadron being hampered by the wind.

It did not really get much better for the Dutch. Attempts to refloat the Prince’s ship led to it sinking (a failed refloat gives a possibility of damaging the ship), the Prince himself being unharmed by captured after struggling ashore. Most (even more?) embarrassingly, the starboard squadron of the Prince’s force largely ran aground trying to get through the channel in the dunes. The Spanish armada sailed on. 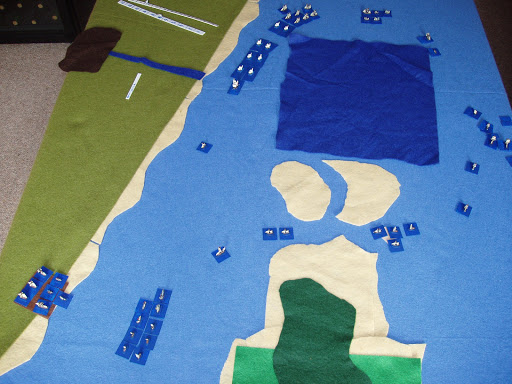 The picture shows the situation when I gave up. The Dutch relieving squadron is about to reach the second village; the Spanish main force will not, however, be far behind. To the right, you can see the remainder of the Prince’s squadron aground or struggling to catch up given their damage levels. Even if they do recover, they are going to struggle to get past their own ships as the tide is going out.

‘I have been well treated.’

‘Excellent. Well, you know, we must set you a ransom. Your fellow traitors are quite keen to have you home, you know.’

‘Yes. What shall we say? The whole of Zealand and Holland?’