‘Do we have any idea where they are?’

‘Sire, Lord Clementine landed north of Eppeid, and Lord Satsuma landed at the port. I believe that they had to fight off some Korean and Chinese troops in order to make the bridgehead.’

‘So they’ve already had to do some fighting?’

‘I believe so, sire, and that Lord Clementine was wounded at the head of his troops.’

‘That will never do. We must advance and hope an army opposes us!’

As you will doubtless recall (if not, have a look at the campaign page to the right), three armies of 1590s era Japanese, led by three bored young Samurai, have invaded Korea separately from the main force, looking for some fighting and some extra land. Lord Satsuma had a hard fight to land at a port (yes, it is Dieppe spelt backwards, for you World War Two aficionados) and had to be rescued by Lord Clementine’s army which had landed on a beach further north, unopposed. This is the activities of the third army, led by Lord ‘Mandy’ Mandarin.

Mandy’s men landed unopposed to the south of the others and has now been requested to march inland. Needless to say, the Koreans take a less than rosy view of this intrusion and have rallied an army to delay Mandy’s men as they head inland. The scenario actually is the first one from Grant and Asquith’s Scenarios for all Ages, adjusted to period, taste and resources.

Mandy has thirty moves to cross the table and exit by the road. I had to think for a while about Korean dispositions and tactics, and decided eventually on a partial ambush while holding the pass on the ridge. The Japanese order of march was established (Samurai first, of course) and off we went.

In the picture, Mandy’s men are, of course, on the road. Assorted Korean bowmen lurk in the woods, while half the cavalry is behind the nearer trees. The rest are on the ridge except the rocket-men who are behind the ridge, but able to shoot over it.

Ambushes, on a reasonably large scale are, it seems to me, tricky things to pull off. The Korean mark of movement was when Mandy got to the second bend in the road. Then the rockets opened up and the bowmen and cavalry moved forward. 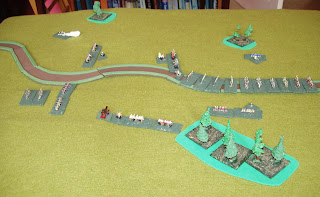 A lot depended on the Korean cavalry. The group from ambush did their job, hit the front of the infantry column and swept away the lead element, pursuing them across towards the smaller wood. The cavalry group on the hill, however, refused to charge, enabling Mandy to turn his own cavalry and hit the Korean pursuers from behind, routing them. This included the general, who was lost. The second Korean cavalry element from ambush was held by a Samurai base and then itself eliminated. 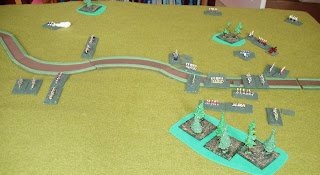 The picture shows the ambush well and truly sprung. The fleeing bases, one from each side, can be seen at the top of the picture, while the arrow and shot fight goes on around the Japanese column. To the right, up a hill, Mandy is rallying his victorious cavalry while the Korean rocket battery is taking its toll on the other cavalry base. In fact, the bombardment became too much for them and they broke a few moves after the picture was taken.

It took a while for both sides to reorganise after the initial fighting. Mandy got his cavalry moving again along with the Ashigaru rear guard and saw off the Korean bows on the far side. Meanwhile the remaining Korean cavalry started to lurk ominously and, indeed, they defeated the advancing Ashigaru blades. 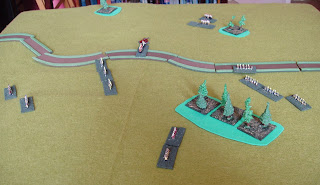 Mandy managed to reorganise too, however, and sent in the Samurai at the Korean spears and shot on the ridgeline. While the Korean cavalry rally from their successful charge in the distance, the spears have been beaten and the shot is now fleeing. The road to Neac lies open, although the Koreans had done a good job and Mandy only had eight moves left to get off the left-hand edge of the table.

I think that there are few lessons to be learnt here. Firstly, both armies are tough. The Japanese have a hard time dealing with the Korean cavalry. Historically, it is thought that contact with the Koreans increased the popularity of the spear-like yari. Secondly, as noted before, the Samurai are tough and hard to beat. Thirdly, generals are important. The Korean effort was hamstrung by the early loss of the general, and Mandy’s habit of charging off with the cavalry did the organisation of the Japanese response to the ambush no good at all. Indeed, he spent some valuable time charging and capturing the rocket battery, which took him out of sight of the battle and led to having to spend about four turns rallying and reordering his troops. While to rockets were annoying, they were not that critical to the action and Mandy could have done some other stuff with his time.

‘Mandy, I thought you had loads more horses than that.’

‘Oh, I sent some of them on leave, you know. Gone to see their friends. I think most of them will be back in a day or so.’

‘You’ve just had a battle and you’ve sent some of the troops vital to our forces on leave?’

‘It was only a small battle, really. Not more than an inn brawl really. But you should have seen me, rushing around, commanding people, charging generals and capturing their bang-stick things. It was great!’

‘I don’t suppose you’ve brought any bang-stick things with you, have you?’

‘How are we going to besiege Neac, then?’