Every once in a while I get a craving to put elephants on the table. I do not know what it is about pachyderms, but every wargamer I know (which is not that many, admittedly) seems to want to launch elephants at the other die. Perhaps they are simply majestic. Perhaps it is the write-ups of early ancients wargamers who had elephants running amok. I really do not know, but nevertheless, sometimes you just have to put an elephant or two on the wargame table. It is one of those life things, I suppose.

Anyway, I was getting Nellie cravings again (ooh-er, missus) and looked back through my notes. My last adventure with elephants seems to have been over a year ago, so the cravings are hardly surprising. That was a scenario taken from Grant and Asquith’s Scenarios for All Ages book, so I pondered what to do next.

I could, of course, have ramped up another battle over the same terrain, except I was not sure I could create the terrain again. Nevertheless, I felt, the Vietnamese would be out to counter-attack somewhere. I flicked back to the previous scenario and started to modify it.

The result was that a Khmer army is snoozing quietly in a village, with an advanced outpost in a hamlet on the other side of the river. The Vietnamese are trying to sneak up on them. 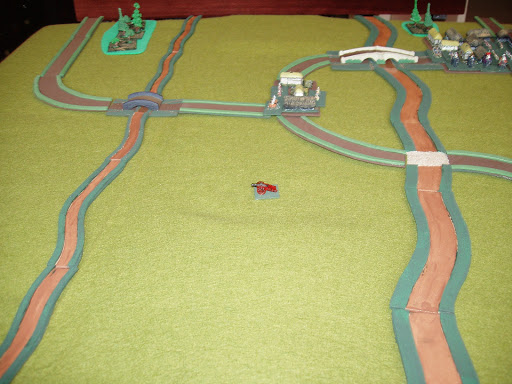 As you might be able to see, the bulk of the Khmer army is in the rightmost village, with two skirmisher bases and the cavalry is the forward position. The stream is actually fordable, but the Vietnamese do not know that. They advance from the top right to try to surprise the Khmer. The troops, when they appear, are all irregular, the bridges and some of the buildings are Leven, other buildings are Irregular and very old Baccus. The trees are Irregular.

The Vietnamese appeared over the next few moves to try to forces the bridges and undermine the Khmer position. A degree of chaos naturally ensued, with the Khmer scrambling to activate troops and cross the river, while never having enough tempo points to achieve what they needed to. The Vietnamese drove straight at the hamlet and the forward position, hoping to overwhelm it before help arrived.

A swirling cavalry combat ensued, between the Khmer cavalry protecting the village (the only active Khmer element at the time) and the Vietnamese cavalry sent forward to surprise the village. After a few moves help arrived from the rest of the Khmer army, which you can see above straggling over their bridge, while the Vietnamese attempt to pile over theirs. In the background, you can see the Vietnamese rocket battery, which has been surprisingly effective at disrupting the Khmer reinforcements.

The combat between the Vietnamese bridge and the hamlet swirled around confusingly for a while. Both sides got their bowmen into position, and the Vietnamese bow attacked the Khmer to some effect, the latter losing a base to a crossbow base commanded by the general in person. More Khmer troops kept turning up (and being hit by rocket fire) while the elephants on both sides declined, repeatedly, to charge each other. Sensible animal, your average elephant, it seems to me, but it certainly frustrated the Vietnamese advance as the Nellies were now blocking the bridge.

In the meantime, after a very tough and evenly matched fight, the Khmer cavalry were routed and exited stage right, pursued by their opposite numbers. The Khmer army had just about woken up sufficiently to have started harassing the Vietnamese elephants with skirmishing fire (ineffectively) and they also brought their tribal foot up, in part to threaten the Vietnamese flank. The deciding activity was the charge of a tribal foot base on a bow element with the Vietnamese general attacked. After a couple of rounds of combat, the bows were routed, which meant that the general had to be diced for. He too was routed and the Vietnamese were now both not properly deployed and leaderless. 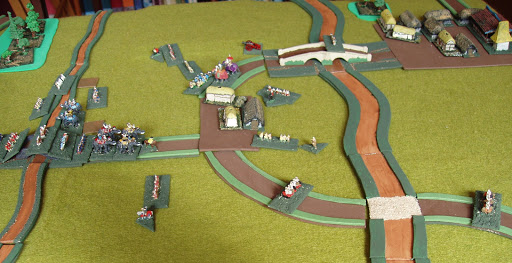 Above you can see the Khmer cavalry exiting, pursued by Vietnamese at the bottom right. You can also see the hole in the Vietnamese line where the bow and general used to be. The Khmer elephant has also charged a bow base and disposed of that, and the triumphant tribal foot on the far side have crossed the stream (the elephants failed to – their bit was crocodile infested) and eliminated to rocket battery. In the distance and behind the village you can see further Khmer elements assembling.

The Vietnamese struggled on for a few turns more but hit the problems of being without a general. Needing to deploy to get more troops across the bridge they generally failed to move at all. The cavalry attempted to rally at the ford, but came under skirmishing fire from the Khmer from the village and could not get their act together. Slowly the Khmer were building towards an assault on the Vietnamese elephants with their own rallied elephants, tribal foot and bows. At this point, the Vietnamese under-general decided that enough was enough. Surprise and the initiative were well and truly lost, and a retreat was the only way out.

A nice and interesting fun battle. I do like to have the elephants out from time to time, and I learnt a few things about my rules for this one. Firstly, I found that actually gathering my army lists into one place might be a good idea. Secondly, I changed the rocket firing rules so they had a chance to hit something without having to roll a six. They did a fair bit of disruption to the advancing Khmer until they were masked by their own troops. Thirdly, I think I have not got the hang of these armies yet. The Vietnamese relied on the cavalry, elephants and crossbowmen, and the latter were defeated by tribal foot from the other side. The Vietnamese army has in its ranks blade elements, and these, I think, should have been sent over the bridge sooner, perhaps even before the crossbows.

Still, we live and learn, and I dare say it will not be too long before I get more elephant cravings.