The Second Battle of Temeshvekovar

‘Will these people never give up?’

‘They are Romans, my friend. They never give up as long as their cause is righteous.’

‘Who says if their cause is righteous?’

‘They decide. And if the cause includes money, it is automatically righteous.’

‘Um… Not exactly. They worship the things you can gain with money, especially power and the ability to make people do what you want them to do.’

‘And so they are back again to try to reclaim ‘their’ money.’

‘Indeed, my friend. All you have to do is beat them again.’

‘And you cannot help again?’

‘I am afraid not. I am still tracking down my brother. The plains are a big place. I think I know where he is.’

Long time, no ancients. Still, I have just finished painting some more Dacians and so it seemed like a good idea to get them onto the table. After the last outing, I felt the Romans had been a bit hard done by at Temeshvekovar, losing out to a desperate flanking charge at the Dacian last gasp. Anyway, I went all sophisticated on this one. 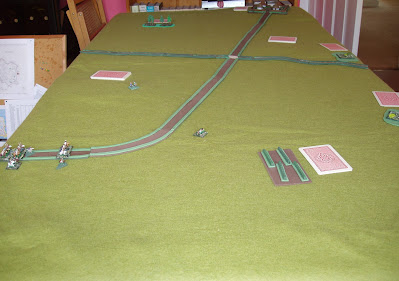 The opening move or so is shown above. The Romans, led by yours truly, have just arrived on the table bottom left. Dubloswhiskos is on the hill to the middle left. The piles of playing cards are the Dacian ambush positions, two or four cards for the smaller positions, the rest on the hill to the left, the hill just behind the stream to the right, and Temeshvekovar itself, in the distance in the right corner.

At this point, I recalled how useful light troops were in ambush situations. I had a base of light horse and was determined to use it. The first ambush threw up a base of Dacian bows in the fields in the foreground. I left those to the infantry.

Accompanying the cavalry, I investigated the rear of the first hill and obtained a major ambush of Dacians from their stack: eight bases of tribal foot, a base each of skirmishers and bows. This made me nervous, as it was here that the Roman attack had faltered last time. I determined to approach this assault more methodically.

The plan was to deploy the auxiliaries to prevent Dacian attacks down the hill on the legionary column, while the legionaries moved along the road to take the hill from the flank, covered by the cavalry. It, well, sort of, worked. 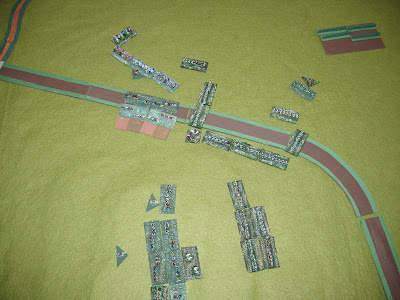 Above you can see the auxilia neatly deployed at the foot of the hill, and the legionaries are deploying. However, the auxilia archers have just been struck and routed by a full-blooded charge down the hill by some tribesmen. I had forgotten, since it is so long ago, that the most vulnerable point of the Roman armies seems to be their archers. Humbug. Still, I have the cavalry backing them up and I have deployed some legionaries to give the tribal foot something to think about on their flank. It will be fine. 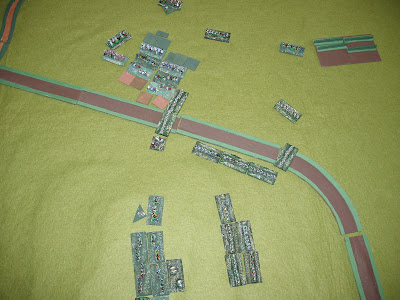 Sometimes, fine is not enough. Or rather, the dice do not smile on the ‘it will be fine camp’. Disordered as they were by their victory over the bowmen, the tribal foot ploughed into the supporting cavalry and, as the shaken counters indicate, gave them a rough time, even with being flanked by some legionaries. The Dacian foot on the hill, by the way, cannot be persuaded, even by Dubloswhikos, to charge down the hill at the auxilia.

Things went from bad to worse as the Roman cavalry lost the next round of combat and fled, although the legionaries did finish off one of the tribal bases. As the Dacians pursued, however, the remaining Roman cavalry struck them from behind and they added to the routing throng. Meanwhile, Dubloswhiskos persuaded his men to charge and they struck the auxilia, causing the right-hand bases to rout but being recoiled by the left (pesky dice again) which meant that the great barbarian had to dice for his well-being. A six was rolled (dice again!) and he was hors de combat. The Dacian morale went to fall back, so they did, but, next turn, some extra Dacian tempo was rolled and, not having much left to do, the tribesmen charged again and this time routed the auxilia.

By this time both armies were in a fairly parlous state. The Dacians were general-less and only had a skirmisher and an archer base on the hill. The rest of the tribal foot was either routing or pursuing. I was about to assault the hill with an imposing line of legionaries, having managed to impose some sort of order on the centre. Meanwhile, some Dacian foot had sealed off the ford.

After a bit of thought, I called for overnight camping of the armies. The Dacians withdrew from the hill and the pursuing tribesmen circled around to join their friends. The Romans camped on top of the hiss, and the ambush cards, with losses removed, were shuffled and redeployed.

The fighting the next day was rather short. The Roman cavalry crossed the river while the foot moved along the road to the ford. I, as general, was too busy ordering the foot to cross the stream that I failed to stop my cavalry from trotting onto a Dacian skirmisher screen, which they started to dispose of up the hill, but they then fell victim to the downhill tribal foot charge. One base was routed and the Roman morale was gone.

Was it my fault? Maybe. There were simply not enough tempo points around to stop the cavalry at the point I wanted them to halt. Mind you, Dubloswhiskcos had already called up reinforcements from the town so I was going to be in trouble anyway. Two deep tribal foot charging downhill are a handful.

‘So you won again, my friend. Even the Romans might accept you have earned your gold.’

‘Do the Romans accept anything? Anyway, could you sort out your civil war and get back to being my ally before they come again? I have to beat them every time, they only need to win once.’