Before you ask, it is an old joke, to do with what auditors do: after the battle, the auditors arrive and… I did not say it was a good joke, and of course, the number of auditors who read this blog will now have plummeted to an all-time low.

Still, I received a challenge a bit ago to count all my little men. That challenge has not been met, because I have not counted my engineers, civilians, buildings, assorted fortifications, siege guns, and so on, but in part, I have done the arithmetic and there is a result:

There you are. That is quite a few little men (all painted, to differing degrees of niceness).

Now there is of course more detail, but those of you who are not detail people, like politicians who are uninterested in how their policies are to be paid for, can stop reading now. Those of you who are thinking ‘Wow, that’s a lot of soldiers and far more than I will ever have’ can reflect on the fact that most of them are 6 mm tall (there are, I think, 25 25+ mm ECW infantry) and that I have been collecting them for nearly thirty years.

The number also puts into perspective the 842 unpainted little men I have in stock, which is a mere 6% or so of the total. So I have not been buying randomly and hoarding the results until wargamer’s honesty took over and I had to admit the numbers left to paint. I have painted the vast majority of my acquisitions.

To the detail, then. The above total consists of 5773 ancients figures and 8118 early modern (and late medieval) figures. It is not, of course, quite that simple. I have counted, for example, a Hussite war wagon as a single figure; in reality, there are quite a few figures associated with it. Similarly with the guns and rowing boats and chariots and so on. But anyway, that is the rough breakdown.

I confess to being a little surprised. Not only was the Estimable Mrs P’s estimate of ‘about 12,000’ alarmingly close to the mark, but I have a good deal more ancients figures than I thought I did. Or at least, the proportion of ancients in the total is higher than I would have guessed. The early moderns got about a ten-year head start over the ancients, so I would have thought that I would have far more of the former than the latter.

The funny thing is that I play more early modern games than ancients. When I do go back to the Greeks or the Romans I do enjoy the games, I admit, but often I decide to break out another late Sixteenth Century game rather than pull out the legions or hoplites. I am not sure why. I started ‘serious’ wargaming with the English Civil war, so maybe it is the pull of those times when life was simpler and a box of Peter Laing figures took a couple of days to appear in the letterbox and might be there after the second post if not initially. I am really showing my age now….

Looking at the ancients figures I find that the Macedonians and Successors box has the largest number of figures with 571. This is mostly accounted for by pikemen, whom I took up basing 16 to a stand. They look good but I tend not to repeat that too often, because it is an awful lot of pikemen to paint (OK, I have done the same for the ECW foot). The other reason is that the depth of the figures on the base is too big for the scale of the bases. Thin red lines (or wavy arrays of pikes) were thin compared to their widths, and I try to reproduce that. That is my story, and I am sticking to it.

The biggest army in terms of bases is, in fact, the Early Imperial Romans (they come second in figure numbers), with the Celts not far behind. The Celts have far fewer figures, due to more skirmishers, light horse and chariots. They are followed by the Greeks, who get a lot of hoplites, of course, but not so many cavalry.

The total is 1100 bases or so. Given that my normal wargame consists of twenty bases a side, this means I can field 55 armies or 27.5 wargames at the same time. This is of course arrant nonsense, and I am slowly discovering that even with my small tables I can field forty bases a side at least and not prop the flanks on the table edge. On the other hand, more soldiers on the table do not make a better game necessarily. 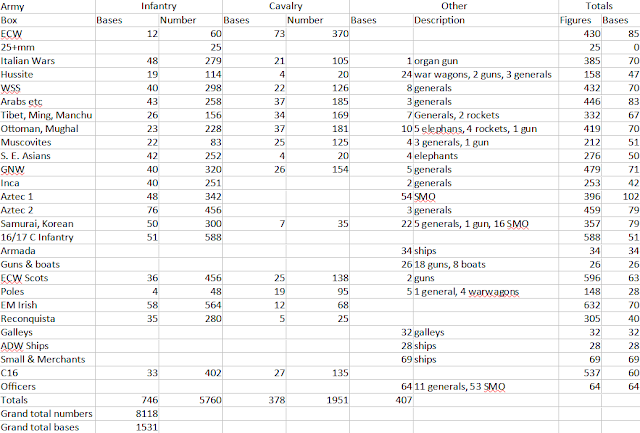 The Early Modern totals are in the table. The storage works slightly differently, so I cannot really say which nation is in front. In general, the ECW is the most likely, although, as you can see and has been noted, there are an awful lot of Aztecs there. There are also a lot of Scots and Irish, mostly because the Scots include Montrose’s highlanders and the Irish include C 16 armies as well as ECW era.

I am not trying to show off how many toys or armies I have. Most of them were collected for a specific purpose over the years. A lot of the south and south-east Asians were bought (and very hurriedly and badly painted) for my 1618-Something campaign when it expanded east. Mind you, I do like the odd elephant on a battlefield.

What, you might ask, is next? Well, I keep promising myself that less painting and more wargames are the order of the day for the next period. I have around 840 mostly ancients to go, and then 550 or so medieval plastics that keep appearing in my memory. Actually, they are in a box in the box room which was tidied out recently. The Estimable Mrs P inquired whether I had plans for them. ‘Oh yes,’ I replied. ‘Next year.’ Talk about giving hostages to fortune.