‘Why not, captain? I am in command. I hold the King’s commission. The Commonwealth forces have landed and are just over there, and they have invited us to surrender to prevent the effusion of Christian blood. For the good of the islanders, I will surrender.’

‘You may surrender, Sir George, but I will not, and nor will my men or the militia here with us. The King is not far away and he will support us.’

‘What with, Captain James, what with? An ambassador and a sheaf of French letters?’

‘We must fight on, knowing the justice of our cause.’

‘Justice does not protect against bullets, captain. We must surrender.’

‘In that case, Sir George, you are under arrest. Troopers, take him away. I will assume command.’

And so the die was cast, as it were. Having landed at St Ouen’s Bay, the Commonwealth force split. Hatter’s regiment (the half of it anyway) marched south and scattered the St Brelade militia, as recounted last time. The rest, eleven companies under Harme, marched west to St Peter where the remains of the Royalist army, reinforced by some further militia, had established their camp.

Block was not keen to assault the village and so attempted to persuade the Royalists to disperse peacefully. After a few dice rolls, Sir George was found to be amenable to surrendering, but his second in command, and commander of the garrison dragoons, Captain James, was not. An altercation took place, as recounted above, and the negotiations were rejected.

This left the Royalists with six militia companies and one of dragoons to face the eleven companies of the New Model Army. Everyone had heard the shooting from further south, actually only about a mile away, but no one knew the outcome.

Block decided to use his numerical superiority to outflank the village on his left, while ‘entertaining’ the enemy in the centre and on the right. James had deployed his own dragoons in the marshy ground in front of the village, lined the stream with musketeers and deployed the rest of the militia in the built-up area, except for the reserve, St Saviour’s militia. 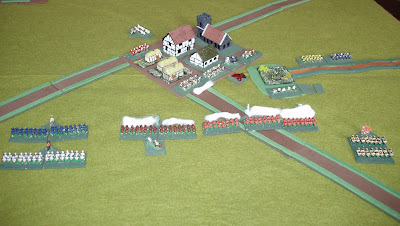 The photograph above shows progress. The Commonwealth left hook is advancing while the centre is engaging the dragoons and St Helier militia in the village. The Commonwealth right is also advancing into position, slightly delayed. James has started to move the reserve to assist his own right.

The resulting fight was quite tough for the Commonwealth side. Musketeers holding built-up areas are quite hard to beat either by shooting or assault. The Commonwealth centre was twice bounced back from entering the village, and the left hook only slowly made progress, while the right did not really get into a great deal of action until late in the battle. The Royalist dragoons were quite quickly disposed of, however (some bad dice rolling there) but Block struggled to get his men moving.

The above shows the action just before the end of the game. The Commonwealth left is now in action having routed the St Saviour militia, and St Peter’s militia is now under pressure although relatively secure in the village. The Commonwealth right is trading shots with the Royalists across the stream, while Block is lining up another assault on the village.

As it happens the assault went in from the Commonwealth companies to the left of the village first followed by the frontal assault by the two companies with Block attached. The result saw the first St Helier militia company destroyed, quickly followed (in the follow-up advance) by the second company (a really bad dice roll). This included Captain James as a casualty. The Royalist centre was no more and, in fact, they only had three bases out of the original seven left on the table.

An army morale test was necessary, which, after the dice roll, left a total of minus four. So far as I recall that is the lowest morale for an army I have seen using my rules, and so the Royalists, or what was left of them, fled.

As I mentioned, this was a tougher fight than I had anticipated for the Commonwealth. Block had to get stuck into command in rallying his men and leading them forward again when they had been forced back from the original assaults on the village. In the later part of the game he also suffered from having too little tempo to being his units back into combat and thus utilize his numerical advantage to the full. A three-against-one assault against a built-up area can succeed. A two against one, I discovered, does not. That does seem about right to me. The assault (or shooters) have to get really lucky to damage the defenders.

Nevertheless, under my campaign rules, all the Royalist units involved have now dispersed and nothing lies between Block and St Helier. At sea, the navies are in sight of each other, but the wind is against the Royalists at present so unless the Commonwealth fleet decides to attack them in the narrow channels off St Aubin’s Bay I am not sure they will come to blows. The Commonwealth fleet’s orders are to find a safe anchorage to land the cavalry, not to engage the enemy fleet, after all.

‘I am so pleased to accept your surrender, but why were you not commanding your troops.’

‘I would have surrendered before, but the dragoon captain arrested me and would fight.’

‘Ah, so this afternoon's fracas is not your fault?’

‘No, but he wouldn’t accept we had lost. Still, there was a lot of musketry and not much loss of life.’

‘And where were you, Sir George, while the fight was going on?’

‘In church, of course. Praying for a miracle.’

‘It would seem Captain James is dead.’

‘You are free to go, Sir George, on parole.’