‘We’re landing. At St Ouen’s Bay, remember? I distinctly saw you at the Council of War that agreed to it.’

‘You’ve just said that the wind was fine. Unicorn and Elizabeth are leading us in. Then we will enter the bay and land, while the transports do likewise and the little warships provide more fire support.’

‘I know I am not a sailor, but I do happen to know that turning right while the bay is to our left and Unicorn and Elizabeth are over there is not the correct thing to do.’

‘Captain, we are stopping. Why?’

‘Lieutenant, do have any idea what is going on?’

‘No, Colonel. I think Captain sir has made an error, sir.’

‘Very well Lieutenant. Captain sir is relieved of his command and you will take us in. Captain sir, below decks if you please. We will discuss your behaviour later.’

Well, of all the captains in the Parliamentary fleet to fumble their initiative roll it had to be the naval commander of the whole lot. Fortunately for the invasion, the orders had already been sent out and the leading elements of the fleet were making landfall. Colonel Block actually aced his roll to relieve the hapless fumbler of his command of the ship and order the First Lieutenant to take them in. Better late than never. 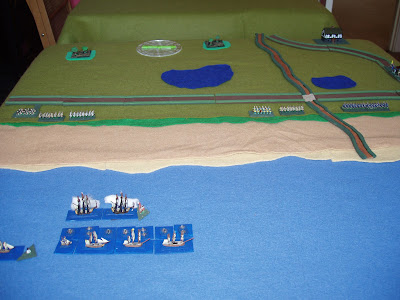 The picture shows the situation after the first few moves. Unicorn and Elizabeth are closest in at present, bombarding the militia units on the beach. In the right background, you can see St Ouen’s manor, and right on the edge of the picture, Sir George Carter is moving up the cavalry and dragoons. In the foreground, the first wave of the beach assault is embarking. For the purposes of the game, as they were under direct orders, the initiative rolls of the commanders were doubled. The wind, incidentally, is southerly, blowing from left to right across the board.

As the militia units were standing back a bit from the beach itself, some of the landing foot were able to get themselves organised before being engaged. You can see the first three companies formed up on the left, while the two companies from the second ‘wave’ have just landed to their right. More Parliamentary ships are arriving, and Unicord and Elizabeth have scored some hits on the militia. You can also see between the landing parties and the merchant transports a sixth-rate New Friggot, which is about to supply crucial fire support to the Parliamentary right. 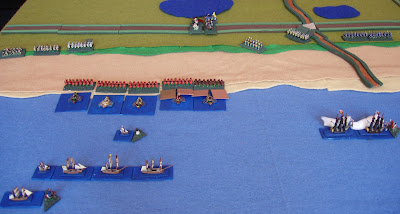 Having landed and got organised, Captain Webb took command on the beach, given that the general officers aboard Lion had not arrived as yet. He moved towards the militia companies opposite him, hoping that the new arrivals would sort themselves out to oppose Carter’s cavalry and fusiliers. 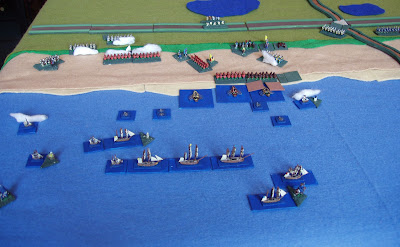 A few moves later and the key moment is being approached. More landing parties are approaching the beach. While the Parliamentary left is doing well against their opponents, Webb has moved a company across to support the centre, the right hand most company of which has not managed to rally from the landing and is being threatened by Carter’s cavalry as well as being shot up by the fusiliers. To the left, you can see the Tresco, commanded by Block’s son, which has just arrived and is shooting at the Royalist's right. Unicorn and Elizabeth are further right, off camera, shooting ineffectually at the rest of the militia. 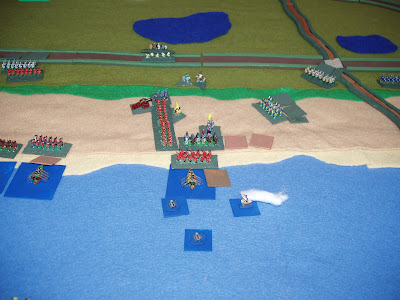 The key moment was the charge of Carter’s horse on the disorganised landers. They were easily disposed of, but then the horse was left stuck between a newly landed company of foot and Webb’s two companies on their flank. Meanwhile, New Friggot has pounded the fusiliers sufficiently to take them out of the action. After manful resistance, Carter’s cavalry broke and fled, as did the fusiliers after another good shot from New Friggot. At the extreme left, you can see more Parliamentary foot landing, and the first wave moving in against the island militia.

The end was not far away, and the above is a wide shot of it. The cavalry and fusiliers are routing, while on the Royalist right two of the three companies of militia are routing also. One of the latter is as a result of bombardment from Tresco and the newly (finally) arrived Lion. More Parliamentary ships and troops are arriving and these will soon be depositing their loads on the beach (two of the transports have cavalry which takes longer, of course). At this point, the Royalist morale sank to withdraw, so they did. On the other hand, if you look closely, you will note that the wind has moved to blow north-west to south-east, which means that the fleet is now on a lee shore. It shouldn’t be a problem. Probably.

As this is a campaign game I have a bit of administration to do, of course, not to mention extracting the Parliamentary fleet from its lee shore. The game took over a map move, incidentally, which is why the wind changed. It has also affected the Royalist fleet attempting to get out of St Helier harbour on the other side of the island and forced them to tack back towards the harbour. Sailing ships do make things a lot more complicated.

‘Good to be on terra firma, what?’

‘You did well Captain Webb.’

‘Thank you, sir. The men were not going to be defeated once we got ashore, sir.’

‘Excellent. I shall write to the Committee about you and your men. Now, what shall we do with this snivelling wreck of a sailor?’

‘Perhaps we should be merciful as the Lord is merciful, sir. God has, after all, made our enemies as stubble to our swords today and so we should accept His mercies and pass them on, even unto snivelling wrecks.’