‘What is that infernal racket?’

‘Is that what you call it? What instrument is that?’

‘What with, for heaven’s sake, man? A banshee?’

‘No, sir. It is in harmony with itself, and the surroundings.’

‘No, sir, not Specifically. I was thinking more of being alone on this weird island, miles from anywhere, with an enemy close by but invisible due to the fog, sir. So I was playing some music to cheer the men up.’

‘I think you have done that, sergeant, by stopping. Anyway, we are not alone. There are six companies of Hatter’s regiment here, all ready and raring to go at a moment’s notice.’

‘Yes, sir. Except for Captain Jeffrey’s company, who are having a nap.’

‘It has been a long and damp day, sergeant. Anyway, nothing has happened so far.’

As they say: famous last words. As anyone who has been following the invasion of Jersey will recall, the Parliamentarians stormed ashore at St Ouen’s beach this time. As the Royalists retreated (or ran for it) the invaders split into two forces, a central one, commanded by Colonel Harme with his own regiment (or the remaining eleven companies thereof, one company having been scattered on the beach). This one has struck inland towards St Peter’s, following the main retreating Royalist force. The other force, commanded by Major Scott has struck south with six companies of Hatter’s regiment with the idea of capturing St Brealdes and St Aubins, as neither of the militia companies from these parishes were present at the beach. However, due to circumstances beyond Major Scott’s control (i.e. bad dice throwing by yours truly), the southern advance has rather ground to a halt in mist and general bad weather. 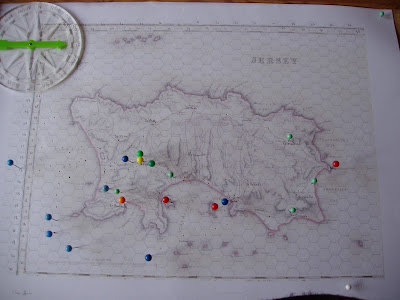 The above shows the campaign map, with Hatter’s regiment and the St Brelade’s militia in the south-west of the island. The orange pin is a courier from Sir George Carter summoning the militia company to St Peter’s, where the yellow map pin is. That pin marks the dragoon company of the island garrison, and the green one next to it is four militia companies. Two more militia companies are forced marching there (St Aubin’s and St Lawrence’s). To the south, incidentally, you can see that the fleets are (just about) in contact although the wind is against the Royalists taking any action. This turn the weather has become light rain, so visibility is limited anyway.

The St Brelade’s militia is led by Captain Ralph LeDieu, a fairly courageous and enterprising sort of chap, who has decided that as the invaders are stationary and it is a bit misty, a surprise attack might be in order. And so a small game was born.

The militia is on the left here, and the camp of Hatter’s regiment is on the right. Dice rolling against the company commander’s initiative score indicated that only the company in white coats (they should all be red I know, but we’ve had to go for a bit of wargamer’s licence here) are not on alert. While visibility is two base widths it does not look that good for LeDieu’s man, although they do not know it yet.

Unfortunately, I did not get many decent pictures from the game, fairly short as it was. The militia met Scott’s own company (in brick red in the centre) and, after a bit of a serious fight, actually bested them. By that time, however, even Captain Jeffrey’s company had rallied, and the militia was under pressure. 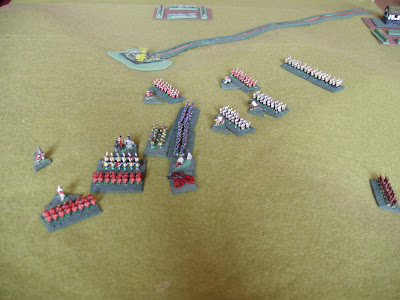 I told you that the pictures were not that good. Still, the left-hand militia half-company is about to break, while the right-hand company will actually win its fight against the flankers, but then decide that withdrawing is the better part of valour. You can just see the remnants of Scott’s company departing on the right-hand side of the picture.

Under the campaign rules I am developing, incidentally, a company that routs during a wargame automatically disperses, which is why Harme’s regiment is missing a company which routed on the beach. Here, Scott’s company (both half-companies) have routed, so Hatter’s are down a company. The militia lost half a company routed, while LeDieu managed to bring off the other half. Dicing decided that the militia went home, having done their bit.

As a further aside on the rules, units which finish the game shaken or doubly shaken also dice with a risk of dispersing, so the Royalists actually lost an extra unit of militia above those who were routed on the beach, which is why they have no units in the north of the island. If you are wondering why the eastern militia units are not, apparently, doing anything, that is because Carter’s courier summoning them with all speed to St Peter’s went astray; I’ve adopted something along the lines of Henry Hyde’s courier rules, so they have an 80% chance of getting through. It had to be that one which failed, of course.

There are negotiations going on between the forces near St Peter’s. Carter was all set to surrender, but his captain of dragoons, Eric James threatened to arrest him unless the island forces resisted. He is now trying to spin the negotiations out until the reinforcements arrive.

In the aftermath of the St Brelade’s skirmish, Hatter’s have occupied the village and will set about advancing on St Aubin’s, which is undefended except for the garrison of St Aubin’s Tower (red pin). At sea I am not sure what is going to happen; a lot depends on the wind. The most advanced Parliamentarian ship is Tresco, a sixth rate, with the fleet not far behind, Behind them are two small merchants which are carrying the Parliamentary horse, looking for a safe harbour to land them. The rest of the merchant fleet has been sent to collect the Guernsey militia and should be back in two days or so.

‘If you play your whistle thing will my company return?’

‘I can’t, sir. It got broken in the excitement.’

‘We must praise the Lord for small mercies, sergeant.’