Recent reading has made me a little sceptical of claims made by the ‘victors’ in battle. As noted recently, Oliver Cromwell was not above spinning his victories, to the extent of turning losing draws into wins and generally bigging up his role in all and every combat he took part in.

I suspect that Julius Caesar was another such spinner of the truth. As you might recall, I have been fighting my way through his first invasion of Britain. The invasion onto the beach was a close run thing but Julius finally managed to overcome the opposition. The second action was the Ancient Britons attempting to stop the Romans from collecting their corn. A lucky bow shot felled the Celtic general at an unfortunate time and Caesar managed to rescue his troops.

The third and final action is described in The Conquest of Gaul VI.35. After the hazardous extrication of his foragers, bad weather stopped military activity. The natives spent the time gathering a large force of infantry and cavalry. Julius drew up his forces in front of the camp and ‘before the engagement had lasted long the enemy were overpowered and took to flight. Julius boasts that he had acquired thirty horsemen, and the Romans pursued. The Britons then sued for peace, according to our Julius, and so the Romans sailed back to Gaul.

Forgive me for being a little suspicious, but why, after all that, did the Romans sail away? If he had been that successful why not conquer the place and have done with it? After all, the Romans had largely supplied themselves from the Celtic grain, had they not? Or is it all just a tissue of half-truths put forward by Jules to cover over an not very successful foray to the edge of the known world?

Still, the third battle was to be wargamed. A Roman force of twenty infantry bases (17 legionaries, 2 bows and a bolt shooter) against twenty Ancient Britons (3 light chariots, 3 light cavalry, 3 skirmishers and 11 tribal foot infantry). The Romans would miss their cavalry, but I did not think Caesar’s claim of having thirty and implying that they were important, at least in the pursuit phase, merited representation.

The problem Caesar has is that he has an entirely pedestrian army against one which is fifty per cent light troops and the rest heavies who can charge any of his bases that might be disrupted. He cannot afford to wait for the enemy to come to him, as they will come and slowly shoot him to bits. So he has to attack. 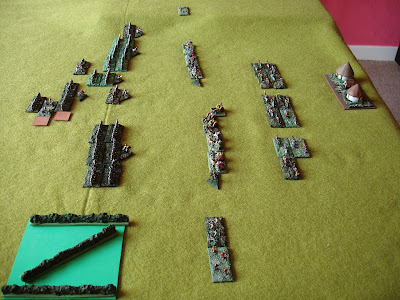 The picture shows our Jules doing just that, and the Celts responding with their skirmishing lines. The cavalry on the far side, and the chariots, on the near side, pelted the Romans all battle with javelins to, well, not much effect, really, but they did have a crucial role to play in the Roman defeat, as did the near side skirmishers. The Celtic skirmishers ensured that the legionaries were disrupted for critical parts of the game, just in time for them to be hit by charges from the tribal foot.

The key combats were in the left centre, where Celtic charges saw off four cohorts, and on the near side (Roman right) where the skirmishers flanked a charge and turned a recoil result into a rout. The centre-left of the Roman lines also, slightly earlier, disintegrated under the impact of the tribal foot charging cohorts which were no longer in a group with their neighbours due to heavy fire from the skirmishers. 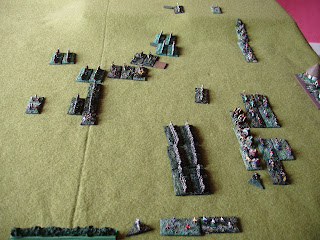 The picture shows the disaster in the Roman centre with four cohorts making off. The fact that Jules himself with the reserve was on site led to a swirling combat with the Romans seeing off one set of tribal foot (those with the brown shaken marker, indicating they are rallying from the charge) while presenting a flank to the rallying tribal foot commanded directly by the British general, who are pursuing the cohorts they have just routed.

You can also see some rather exposed Roman archers in the centre, who are about to be charged and routed by some tribal foot and, on the near side, the British skirmishers who did for the nearest cohorts of Jules’ other legion. Caesar was later heard to describe them as ‘those flankers’. At least, it is thought that is what he said. By contacting the Roman flank as the charge went in they turned a recoil result, which the legion could have stood, into a rout.

At that point, the Romans had lost eight bases out of twenty, and their morale slumped to rout. The British were not undamaged, having lost two tribal foot bases in the centre and the right flank skirmishers to Roman archery. Slightly amusingly, these routing tribal foot and some Roman cohorts landed up running practically side by side…

And so another campaign finished, this one based on Caesar’s own account. With the exception of the final battle, it went fairly much as Julius claimed it did. It seems to me that it might have been rather tougher than his spin allowed for. As for the final wargame, well, Julius’ luck did rather abandon him; some of his rolls were unfortunate. On the other hand, his total lack of cavalry was always going to make it a tough game. He has to attack to have any chance, and that lays the legions open to disruption from the skirmishing light horse and chariots and then the disrupted cohorts being picked off in detail by charges of the tribal foot.

Having played through the games and pondered Caesar’s accounts with a bit more of a sceptical eye, I suspect that Julius was spinning his adventures a bit. After all, if he won such an emphatic victory at the end as he claimed, why did he so readily agree to terms and push off back to Gaul more or less on the same day?