Armada Abbeys – The Wrap Up

There really is little more to tell of the battle at Kildale. The English attacks went home, and Don Pedro’s tactics of defence in depth (which were forced on him by the narrowness of the terrain) did not work. Perhaps he should have put his cavalry and musketeers up front. The English used their light horse well to shield the infantry columns from artillery, and when the men with big choppers in their hands (ooh-err missis) got into the village it was all really over. 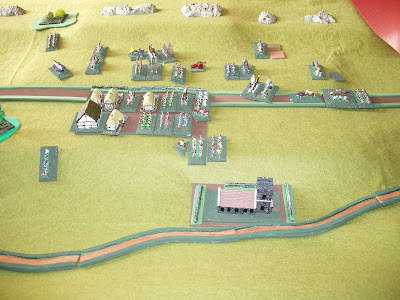 It has to be said that Don Pedro’s dice rolling was awful, and the English rolling was lucky. Nevertheless, Don Pedro was forced to retreat and, as the English army was hot on his tail and the Scots looping around via Guisborough on the longer but faster route to Whitby, the Spanish would be forced to surrender.

At the ninth wargame, therefore, I think the Armada Abbeys campaign has finished, and I suppose there is scope for some reflection. Firstly, I think, the campaign was a lot of fun, spreading as it did over the Cleveland plain and, latterly, up into the edge of the North Yorks Moors. Don Pedro fought a good fight, I think, and deserves his rioja when he gets exchanged back to Spain.

On a more global scale, of course, King James VI of Scotland will have done his claims to succeed Elizabeth as the true Protestant defender no end of good. His gamble in leaving potentially Catholic rebels in the north and marching south to aid the English succeeded in spade-loads. Having seen off his own opposition at Coldingham he then foxed Don Carlos and crossed the Tees, following that up with the beating of the second Spanish army at Northallerton.

In my mind, the Scottish musketeers were the star performers, with the artillery coming a close second. The Spanish cavalry did well, the infantry not so well. The English, once the militia had been defeated at Whitby and Guisborough on the Spanish outward march, were rather nondescript, except their light cavalry. These sorts of impressions on the wargamer’s mind bear no relation to reality, of course, but they are the way things seemed.

As for the campaign, it was a narratively formed activity. I had no map (except a reprint of a Tudor map of Yorkshire, which has very small print for North Yorkshire) and a bit of local knowledge. The conceit of the campaign was that each wargame would be played in the shadow of a dissolved abbey or another religious house. Hence we had Whitby Abbey, Guisborough Priory, Northallerton Friarage, and so on. Kildale, incidentally, did have a priory.

I long ago decided that map-based campaigns were too difficult to maintain. The problem is that the administrative load becomes too great. Even in simple campaigns, the wargamer starts to resemble a quartermaster rather than a general. Granted that professionals study logistics while amateurs study tactics, but I am, and much of the wargaming hobby is, amateur. I do not, particularly, want to run my campaign from a spreadsheet.

One way of looking at wargaming, I suppose, is that it is a means of story-telling. The plots can be fairly simple, or really convoluted. With most plots, and with most wargames, there is a beginning, a middle, and an end. Perhaps there are twists along the way – the side that seems to have won suddenly seems to have lost, but then wins in the end, that sort of thing.

In common with much story-telling, simple plots tend to get boring. Line them up and have a go, with the only outcome aimed for being the defeat of the enemy army, palls for most people after a while. Campaigns tend to be too heavyweight for many, so scenarios give more complex stories, different narrative arcs, and some different objectives. You could characterise some of them as ‘quests’ for example – intercept the convoy and capture it, or intercept the princess and carry her off to the lair. Role-playing games are often of the quest format, for example.

There are, of course, a number of other sorts of plot around. You could, if you were so inclined, describe the Armada Abbeys campaign as a sort of voyage and return, possibly in multiple characters. What did Don Pedro learn about invading foreign countries? What about King James? And so on. The very fact that I picked on these characters and outlined their responses tells me something about the plot arc that the campaign followed.

Not that the outcomes were pre-determined. At one point I did think that Don Pedro would be going into winter quarters around York and that the spring would find him marching south. Don Carlos’ loss at the Friarage put paid to that, of course, and put the Spanish on the defensive. The key action, on reflection, was the light cavalry clash at Mount Grace, which enabled the English to build a fort at the road junction which helped to destroy Don Carlos’ defeated army after Northallerton. But I did not know that when I created the action. Even stories we make up for ourselves can surprise us.

As any reader of the blog will know by now, I have a number of these campaigns on the go at any one time. Partly that is dues to the wide variety of armies for the ancient and early modern periods I have collected over the decades, and partly it is to do with the reading I do and, perhaps, a predilection for spinning yarns about them. Some campaigns never get beyond the first battle, of course, or never develop into much of a narrative. Some, like the Armada Abbeys, do.

I am not claiming that the campaign was flawless (which wargames are?) but the campaign conceits did keep the interest and focus going. I got a variety of scenarios into the wargames as well, from a beach landing to a rearguard action. And so it finishes, with Don Pedro and honoured prisoner of the English, and King James about to be named heir presumptive to the throne of England. History as it never was...