And I’ll be in Whitby afore ye.’

‘For heaven’s sake general. You pursue the Spanish through the hills, and I’ll go via Guisborough and cut them off from the port. Surely this strategy thing is not that difficult.’

‘I see what you mean, sire. I shall order my troops accordingly.’

‘See you on the other side, laddie.’

Finally I have nerved myself for what looks to be the final action in the Armada Abbeys campaign, which has been running a while (since January 2018, to be specific) and has involved eight battles so far, without counting the offshoot campaign in Ireland. You can catch up with the narrative of the narrative campaign from the link to the right.

A brief synopsis of the situation has Don Pedro and the invaders rocked back to Stokesley after the collapse of Don Carlos’ army at Mount Grace. Don Pedro, now faced by both an English and a Scottish army, has little choice but to retreat back towards Whitby, whence he came. He is aware, however, that the shortest route between his current position and the port is over the edge of the North Yorks Moors along the valley of the Esk.

As the conversation above suggests, the Scottish King, James VI (who is rapidly firming up his chances of succeeding Elizabeth to the English crown) is taking the lowland route through Guisborough, while the English army is directly pursuing the Spanish into the hills. Don Pedro hopes to blunt the English pursuit early and thus pass unimpeded to Whitby before the Scots bar his route.

Don Pedro made his stand at the village of Kildale, the first major defensible point going into the Moors. The village is in fact on the line of the (19th Century) Esk Valley Railway, which is certainly a scenic route to get to Whitby. In fact, the road and the railway criss-cross each other all the way across the Moors.

Be that as it may, Kildale is on a sort of plateau (sort of) in the hills, with high moors to the south and north, and a sizeable dip between it and the northern hills, where Captain Cook’s Monument is these days. This struck me as being a particularly difficult terrain to build with my limited resources. Avid readers of the blog will have noted that hills do not feature particularly strongly, or noticeably, in my wargames.

Still, not being one to be defeated (not quite) I cast around for a means of making a hill / plateau / dip / hill terrain. My desparate eyes alighted on the bookcase, and so the terrain was constructed. 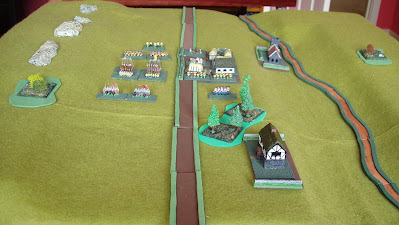 The picture shows the view from behind the Spanish lines (I. e. from the west). The southern moors are marked by the rocks – these are impassible. The slope is very steep. Indeed, when such things happen, these hills are the venues for fell runs. I did consider using cat litter (Piper might have agreed to give up a little) to mark the hills but decided that such a substance and felt terrain sheets probably would not go well together.

Still, there is then a flat bit where the village is, with Kildale Manor nearest the camera, delicately screened by woods so the plebeians cannot see what the local gentry are up to. Don Pedro’s headquarters are, of course, at the manor. Then comes the dip, with St Cuthbert’s church down it. This might seem odd, but it is there and, if you approach Kildale from the east you have to look very carefully to see the top of the tower. These days the railway line cuts the church off from the rest of the village, a fact which causes funeral directors no end of bother. The church is approached by a footbridge (which may be unique in England, I have no idea; it is certainly unusual).

In the dip there is a small stream (which might be the headwaters of the Esk, I am not sure) and the ground then slopes steeply up (not quite as steeply as the southern side). Captain Cook’s monument is on the top of that bit, a bit further north. The whole field is crossed by the Cleveland Way from right to left, incidentally.

All in all the terrain is probably one of the most complex I have created, which probably does not say much for my creativity. The figures and trees are Irregular, by the way, and the buildings a mix of Leven and Baccus. The books are by Aristotle, Coplestone, Israel and Hobbes. I doubt any, except perhaps the latter, would appreciate their tomes being used in such a way.

The plan of the Spanish was to hold defensive positions around Kildale for as long as possible, counter-attacking with the cavalry, to hopefully send the English reeling back towards Stokesley and to permit the retreat towards Whitby to proceed apace with no further interference. The English plan was to hopefully overrun the Spanish positions quickly and with few casualties. After all, the campaign seems to be won and lost, so getting loads of people killed seems a poor way forward, and Her Majesty would not be pleased.

I am starting to run short of words, having waffled on about the terrain for so long. The english approach from the west, of course, and are in ‘alerted march order’, that is, the know the enemy is nearby but not exactly where they are. 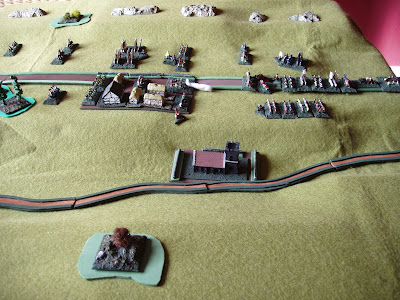 After a few moves the view from the north was as above. The English are fully on the board and the borderers have disposed of the Spanish light cavalry (with some very lucky dice rolls, admittedly). They are clearly planning and assault on the village with two columns of troops, the bill and bow nearest the camera and the pike and shot pn the road. Don Pedro has moved his infantry up to the south of the village and is hoping that his artillery and skirmishers will hold the English off for long enough for their supporting musketeers to arrive.