Now, do not worry. Your correspondent has not suddenly started to move from couch potato to 26 miles without any training, but has returned to the battle of fascination (we all have one as wargamers, I fancy), Marathon 490 BC. I reported on a rather easy Greek win a week or two ago, and a slightly tougher one in April.

I have since refined the Persian deployment and had another go. Give my rules give the Persian infantry (which are a specific troop type) +1 for a supporting rank, and given that the tactics of trying to disrupt the Greek line by having a single line of Persians failed, I tried the doubled-up version. 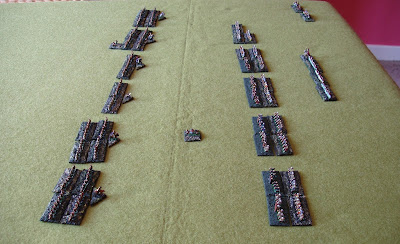 The Greek deployment is the same – eight bases on the flanks, four in the centre, while the Persians are two deep, as seen, with a reserve of Ionian hoplites and the cavalry arriving the the right rear.

The plan was that the Persians should have a better chance of shooting some gasps in the Greek advance and then a slightly more equal opportunity in the subsequent melee. It sort of worked out like that, but not as much as I thought it would. The battle proceeded much as the last one, in fact, except that the Greeks did get a bit more raggedy on the way in to contact. 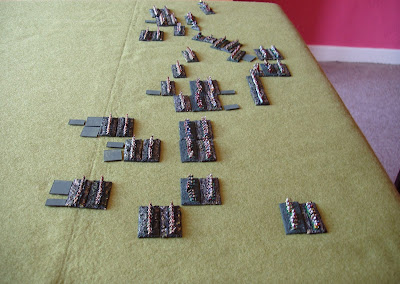 The picture shows the final positions, just as the Persians broke. You can see an encouraging number of Persians on the field, but a closer look would reveal that a fair number of them are routing. On the other hand, you can also see that the Persian left has done a reasonable job in delaying and disrupting the Greek right (the sea is nearest the camera, by the way), and the Persian centre is by no means defeated (which is right, proper and historical). However, the Persian right is a mess, even though the cavalry have done their job and delayed the far left of the Greeks.

Pondering the results, I came to the conclusion that the Greek assault was just too violent. The hoplites start at a base three, plus one for being two-deep (in the wings, anyway) and plus one for advancing into contact (the Greeks do not seem to need to have special charge rules here). The Persians are on a base of two. They might get a few added plus ones of overlaps, but still are a basic two against four, which does not add to the longevity of the line if they cannot disrupt the incoming Greeks. In archery, the Persians are at three against three. Perhaps I just roll badly for them.

Still, nothing ventured. I decided to give Persian infantry the extra plus one for being two deep in melee, and added some extra infantry (pace Sabin, who reckons that the number of Persian infantry is decisive in determining the outcome) and set up again. 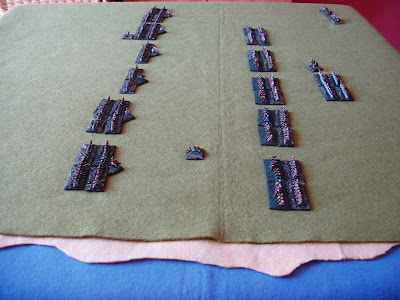 This time, the Persian line being slightly extended, and you can see the sea. The eagle-eyed among you will note the extra base of Ionian hoplites in the Persian reserve, and an extra base of Persian infantry, making all the Persians two deep.

The game is slowly approaching the long, hard struggle that Herodotus reports. The extra for the two-deep Persians helps in starting to hold the Greek impact, but only a bit. 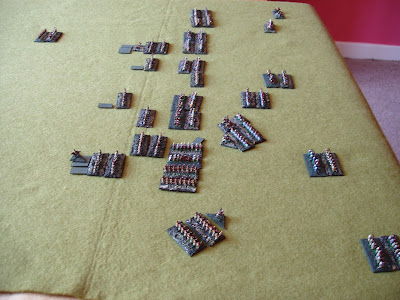 The slightly fuzzy picture shows the end of the game. You can see that the Persian right has held this time (and even routed some Greeks), and the centre has not done too badly either, but the left has collapsed, as have the cavalry on the far right, which got caught by the hoplites. The Greek right, nearest the sea, is now turning in, in the approved manner, and the Persians are committing the reserves to try to shore up their centre left.

It was, as I mentioned, a bit of a tougher fight for the Greeks, but they still won quite handily. Obviously the Persians need yet more infantry, or a complete tactical rethink, to win this one.

This has been an interesting set of battle and play tests. Marathon seems to be a tough one for the Persians to win, largely because they are automatically on the back foot, relying on archery to disrupt and delay the Greeks, rather than advancing themselves. This seems to be a reasonable tactic, it is just that when they get caught in melee, they are at a disadvantage. They need to get a bit lucky to disrupt the Greeks sufficiently to give the Persians an edge in close combat, and they cannot guarantee to obtain that all along the line. Therefore they will cave in somewhere, and that will be exploited by the Greeks.

The Persian tactics are reasonable ones, that is, their normal enemy were similar foes to themselves with lots of mounted troops, and massed archery was a decent response to that. The Greeks were probably the first massed armoured infantry force they met. Even the Persian Immortals do not seem to have been as heavily armoured as the hoplites, and remember, we are not talking about medieval bows here; an arrow that could puncture plate armour is a very different animal than a fifth-century BC projectile.

Still, it does make you wonder if Marathon is ever winnable by the Persians. I can, and probably will, add even more infantry to their line and see when they can at least hold the Greek centre adequately. Another idea which occurs is to put the Ionians in the front line to hold their compatriots at least somewhere. The Persian cavalry it seems can delay but not defeat the hoplites, at least in the numbers that were present at Marathon. Another base or two of horse would not seem to be going to make that much of a difference.

Either that, or the Persian archery needs to get luckier. But has anyone ever re-fought Marathon and managed a Persian win?