Little Braddock on the Down

You might have picked up that I am something of a sceptic when it comes to formations in wargames. For example, I do not really believe that the Persian ‘Sparabara’ formation was used much on the battlefield. It is a nice idea on the parade ground and doubtless looked very impressive. But as a practical field formation, I have my doubts. Similarly, I suspect that the classic ‘tercio’ formation of the Seventeenth Century was similarly a parade ground arrangement. I doubt that sensible Spanish commanders would relegate half their firepower to the back of a formation unless they really were in danger of being surrounded.

These formations are, I think, more a result of artistic representation than practical battle deployment. After all, if we went with the Bayeux Tapestry, we would have a fairly odd notion of the Battle of Hastings and the formations used, not to mention an even more confused account of the narrative than we already have. Useful as art is, it can easily lead us astray.

A comment in, I think, in Wanklyn, M. (2014), Decisive Battles of the English Civil War (Barnsley: Pen and Sword), is to the effect that we are heavily influenced by the conventional assumptions about deployment in the English Civil War as well. The assumption is that armies deployed with two wings of horse and a centre of foot. Which is, of course, perfectly true of many of the battles. It can, however, have some odd effects, most notably with respect the the left-wing of Essex’s army at First Newbury, which seems to have spent the entire battle enjoying the water meadows by the River Kennett. Wanklyn makes the entirely reasonable suggestion that the Parliamentarian left wing horse was not, in fact, on the left, but attacked in the centre; Essex, for all his faults as a general, was not stupid enough to waste half his cavalry on riverside picnics while the rest of the army was in danger of defeat, cut off from its home base.

I digress, but only a bit. Somewhere out there in the blogosphere there used to be a blog called ‘Going Back to the English Civil War’, and that is what I have done. For some reason, I have avoided the ECW, which was my first ‘proper’ wargame period. In fact, I dug out my 15 mm Peter Laing ECW collection recently, and then carefully put them away again. Nevertheless, the seed was planted, and I have gently meandered my way back to the Seventeenth Century and the ECW in particular.

I suspect that part of the reason for my reluctance was the experience of ECW battles with DBR (which was not, in my opinion, of the best) and my experience of writing ECW rules (which was fine, but a bit of hard work). Memories have faded and I was flicking through my sources looking for something to try out. Ages ago I considered Braddock Down (19th January 1643), but rejected it because of insufficient hedges in my collection. That has now been corrected, and after plenty of um-ing and ah-ing, I pinched the orders of battle and deployment from Julian Lander’s first book of ECW battles and got on with it, using my own rules. 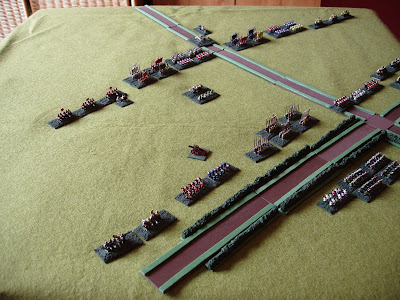 The picture is taken from behind the left flanks of the Parliamentarians, led by Sir Patrick Ruthven. The road to Liskeard is just visible behind their centre-right. Ruthven had five bases of cavalry, ten of shot, five of pike, and a gun coming up from Liskeard, for a total of 21 bases. Hopton had six cavalry, eight shot, eight pike a dragoon base and a gun, for a total of 24 bases.

So far as I can tell, there is no good description of Braddock Down as a battle. In reality, the Parliamentarians seem to have shot off a volley and then run for it. A re-fight is unlikely to produce that result at least. Furthermore, Lander has gone for the conventional deployment of horse and foot on both sides, which may, or may not, be accurate. Additionally, under DBR, the pike and shot are not integrated (something that PM: ECW tried to fix), so the deployment is of blocks of pike and of shot separately, although the very brief account of the battle I have found does credit Grenville’s Cornish pike with the decisive charge. 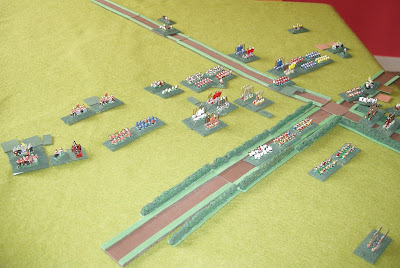 The final dispositions are above. The Royalists have pretty well destroyed the Parliamentarian centre, the pike fleeing back up the road, some shot have just been routed on the centre-left and the remaining Parliamentarian pike are looking a bit isolated. The royal centre is now stalled in front of the commanded musketeers in the road protected by the hedge. On the flanks, the royalist horse have been superior but not dominant. On the royal right, Hopton is about to dispose of the rest of Ruthven’s horse, while on the left most of the Parliamentarian horse has routed apart from that under Ruthven himself which has just routed some royal horse.

Nevertheless, the Parliamentarian morale has just dropped to ‘withdraw’, and so Hopton and the Cornish have won. I had forgotten how much fun an ECW battle can be, having been a bit dubious about the mirror fighting aspects of the period. The problem is that rules have a tendency to exaggerate the differences between the side. In DBR the Cornish pike are automatically Pk(S) and the royal horse are Pi(F). There is no evidence to speak of that that was the case at Braddock Down – it is retro-fitting from later battles. So in my rules, unless there are exceptional reasons for it, all troops are the same. Thus fighting a mirror image is potentially more of a problem.

In this case, however, the Parliamentary deployment given by Lander was more of a problem. If Ruthven had lined the hedges and not deployed in front of them the royalists might have had more difficulty. The commanded shot behind the lane are also a bit of a puzzle, as is how the routing Parliamentary foot got ridden down by their own cavalry.

Still, a good time was had by all (it was a solo game, of course) and I am now hatching plans to increase further my stock of ECW infantry, as I ran out. If you look closely some of the Parliamentary pikemen are, in fact, Swiss.