A long time ago I think I mentioned, in the midst of the rebasing project, that I had discovered a DBR army’s worth of Tibetans. They were rebased, briefly admired, and put in a box along with the Mongols, Ming and Manchu.

You might wonder why I have an early modern Tibetan army. It is, indeed, a good question and I can only plead either insanity of a completist mindset that was determined to create an army for every DBR army list nation. Insanity seems to most sensible choice.

Anyway, I have them and I suspect that they have never actually been on the wargame table. It was clearly time to change that and a ‘low stakes’ wargame hoved into sight. For this one, I had no particular narrative in mind and simply rolled the dice for the terrain, noting that Tibet does not have an awful lot of terrain features except hills.

The opponents were to be the Mongols, for no better reason than they were next door in the box. I think that historically the Mongols and Tibetans had a few punch-ups, but don’t quote me on that. It seems rather a long way on the map from Mongolia to Tibet. I could have used the Chinese, but I do not wish to come to the attention of the agencies of the Chinese state, so stuck to the Mongols. The latter have been on the table before, a long time ago, in one of the very few face-to-face wargames I have played. The figures, incidentally, are all Irregular.

The terrain rolling gave me a scenario: ‘The Battle of the Yeouch River’. There are hills and a ford which is the key strategic objective for both sides. The Mongols arrived first and seized the advantage, and the ford, assisted by being an all cavalry army. I was a bit nervous of the Tibetan's deployment because over half the infantry were rather feeble militia. Still, I had a steep hill and the deployment looked like this. 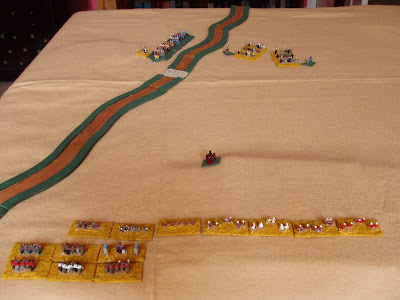 The Mongols are at the top, the lights on the Tibetan side of the river, the heavies about to ford it. The Tibetans have just arrived, planning to hold the hill (the front slope of which is steep) on their baseline while the cavalry sweep the Mongol lights away and the archers contribute some firepower. It did not quite work out like that. 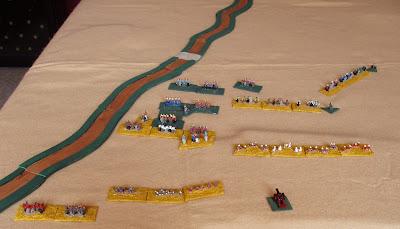 The picture shows part of the way through the action. What has actually happened is that the heavy cavalry on both sides, or part of it, is clashing by the river. Both generals are involved. The Mongol lights, which were supposed to be shooting up the Tibetan infantry, have only just deployed and discovered that as the hill on which said Tibetans are deployed is steep, they cannot actually get to them directly.

I suppose it is worth noting here that the model of skirmishing is small groups rushing forward, firing their weapons at close range and then retiring to the main body and letting someone else have a go. Thus, in the model, even though the range of light horse skirmishing is four base widths, the leftmost Mongol light horse are not in range of the Tibetan militia. I blame poor staff officers, myself.

The gap between the hill and the river got quite crowded with a swirling cavalry contest. You might wonder why the Mongol heavies are on green bases while everyone else has a base which, in a dim light, could pass for desert sand. The answer is that I pinched the Mongol heavy cavalry from the Chinese Ming, as I do not have sufficient Mongol heavies to make up the numbers (due, I think to the DBR points system rating the Mongol lights are expensive). The advantage was that I could tell who was Tibetan and who was a Mongol, anyway.

The cavalry battle raged while the Mongol lights tried to figure out what to do. Eventually, the Tibetan luck ran out and their general went down, rolling a 6 on a recoil (5 or 6 to be lost) and being unlucky, while the Mongol general rolled a 3 on a 4, 5, or 6 recoil shaken and was lucky.

Even though the Tibetans were leaderless, they fought on a bit and took out another Mongol cavalry base, reducing the Mongols to ‘fall back’ morale. Without a general, however, there was not much more they could do and as the Mongols reorganised and brought their lights forward, aiming to outflank the militia on the hill and use a more amenable slope for their operations, I, as acting Tibetan general decided that a withdrawal was the best option. The only alternative was to be slowly shot to pieces by the Mongol light cavalry.

I think that the game shows how dependent armies are on the leadership of the general. I did consider a rule permitting a new general to be appointed if the original one is lost, but actually, in the real world, armies often collapsed upon the death or perceived death, or the leader. This was not just an Eastern phenomenon, however: consider what happened at Lutzen (OK, the Swedes wavered and the next commander in the chain took over) or Marston Moor while Rupert hid in the bean field.

I think the answer is that Lutzen and Marston Moor were both, in my system, big battles where there would be more than one commander, so the loss of one command stand would not be so devastating, although it would be inconvenient. On the other hand, loss of generals, or even perceived loss of generals (such as, out of period, William at Hastings) could cause wavering, command problems and require the leader to expose themselves (ooh-er missis) to prove that they were still there.

So I think, on balance, that the risk to leaders section will stay, even though often these wargames are decided by the loss of one or other generals. It seems to make historical sense, and I can, as demonstrated, rationalise away those occasions where it did not happen to be quite so devastating.