In 55 BC, as every schoolboy used to know, Julius Caesar invaded Britain. He claimed this was in retaliation for the British tribes' support for the Gauls during his campaign there, but, this support is unlikely to have been significant. As the notes in my Penguin translation of The Conquest of Gaul observe, the Romans were now in control of the Channel and the British were not going to be crossing in force to raise rebellion.

It is a lot more likely that Caesar crossed the Channel for the same reason Caesar did most things, including writing The Conquest of Gaul. That reason was, of course, to big up Caesar himself. What other way of doing so could there be apart from leading an army to a desolate spot half in and half out of the civilised world? (Parallels with Brexit are noted but ignored in a wargaming blog.)

Caesar, for reasons of transport, split his army into the infantry which sailed, with himself, from Boulogne, and the cavalry which embarked from Ambleteuse, six miles north. Jules arrived off Dover at about 9 am and found the British on the cliffs ready to pelt him with rocks, javelins, and other things. He sailed along the coast a bit and decided to land, probably between Deal and Walmer Castle.

The British responded by sending their cavalry and chariots along the coast to oppose the landing. Caesar’s cavalry were slow to embark and were nowhere to be seen, so the infantry attempted to land. The result was a fair bit of chaos; the Romans were not keen on landing on an unknown beach in the teeth of mounted opposition. A tough fight ensued, even Caesar admits that ‘great confusion resulted.’

Having examined the state of my wargame cupboard, I noted that, in the ancients pile the Celtic box was at the bottom. In the early modern pile, incidentally, the Inca box is at the foot. I have yet to really work out what to do with the Inca, although I think there are some interesting battles to be had post-Spanish conquest, as the Spanish fell out among themselves.

Still, having decided on something Celtic, I considered assorted opponents. I did nearly go for Marius against the Gauls and Germans, but decided to stay on firmer ground (as it were) with Caesar in Britain. Looking Britain up in the index of The Conquest of Gaul gave the scenario described above. A bit of pondering yielded the forces and terrain for an interesting looking wargame. 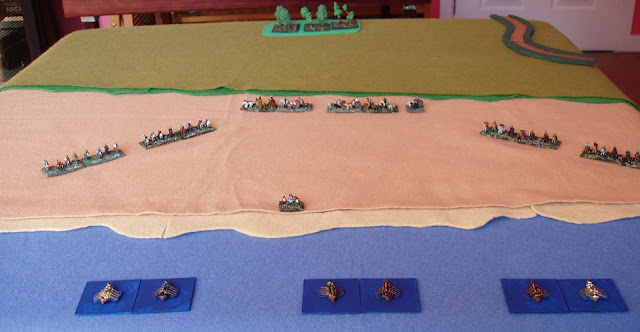 The Celts are deployed on the beach – 8 bases of light cavalry and four light chariots. The Romans approach from the sea in two waves of six. They have 10 bases of legionaries and two of archers – Caesar refers to the warships firing slings, bows and artillery to drive the Britons back from the shallows, so some firepower seemed relevant.

I should note here that this was the second play-test of the new, simplified, Polemos style Ancients rules (the first was Marathon, which led to more detail on interpenetration). The figures were all Baccus, the boats are Irregular, as are the trees.

As the Romans hit the beach, the Britons moved slightly forward and opened fire. The legionaries did not, on the whole, hesitate (they had to throw a six to fail to disembark), but at -2 terrain shaken, they were only at evens in the dice roll against the light horse. Oddly, the chariots were at +4, which seemed rather a lot, but I played along with it but it has now been reduced to a more reasonable +2.

After a few moves, I examined the Roman position. It was, as you might say, parlous. 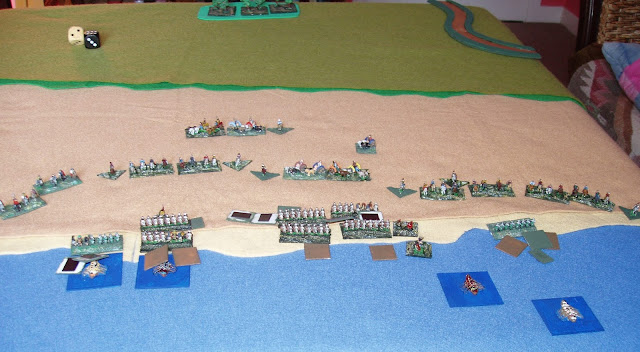 The incoming fire from the Britons made it difficult for the Romans to organise (i.e. remove the terrain shaken) on the beach (they needed to be unengaged in combat for that). On the left, one cohort moved in front of the other to give the latter time to form up. This worked, but the first cohort was routed before their comrades could return the favour. Elsewhere, the Romans were more or less pinned to the shallows, taking casualties and, except for the archers (you can see the left flank archers are making a bit of a difference), not able to return anything much.

A few things saved our Jules’ blushes. Firstly, the British dice deserted them – Jules managed to keep the tempo throughout most of the game. Secondly, his left flank troops, thanks to the self-sacrifice of the hero cohort,, got ashore and into contact with their tormentors in an organised way. Light cavalry in close combat with legionaries usually ends badly for the former. Thirdly, Jules himself took the risk of leading a disorganised cohort into another British light cavalry base and, after some very dodgy moments (I think I had to roll for the general’s life three times) routed them.

The impact of these fights made the British line waver (bad rolling again, I’m afraid) and that gave the Romans more time to form up (troops with terrain shaken remove one level automatically if they are not in combat) and move forward in a more threatening manner. Jules got onto the flank of some chariots and the archers on the left and right routed a base of light horse each. As a consequence the British went into ‘fall back’ mode and I decided that they should ride off at this point. The Romans were ashore.

The game was a lot of fun. I have a photo of the Roman left early in the battle (unfortunately a bit blurry) where every Roman base is shaken, some at level two. The message was ‘General, it is not going too well’. With the exception of the anomaly over the light chariots’ ranged combat rating (they cannot be a huge amount better than the light horse, although chucking sticks from a platform might be better than from a horse) the rules seemed to work quite well and I only have a few pencilled amendments to add, mostly around the use of chariots for skirmishing.