It is a ‘well-known fact’ that the Spanish conquered South and Central America by being Western, Christian, having better weapons, moral superiority and all-round heroes, while their opponents were disorganised rabble slaves, the minions of superstates which were barbarians and needed the light of proper civilisation bringing to them.

Yes. Well, if I started to unpack everything that was wrong with that paragraph we could be here for a while. Perhaps I can suggest that a little further nuance is required from the normal ‘colonial’ narrative, which permits some degree of agency to the natives. The Spanish had the good fortune to arrive in Mexico while there was an uncertain ruler on the throne who negotiated rather than wiped the conquistadors out. In South America, the Inca Empire was in the midst of a civil war when Pizarro and his men arrived.

If, therefore, something to do with the Inca is on the cards, we need to start with a civil war, Inca versus Inca. The two leaders at the time were Huascar and Atahualpa, and so an action between the two would seem to be the place to begin. The civil war seems to have been fairly brutal, and the Spanish arrived towards the end, but not at the end of it. Thus, they were allowed to settle. Atahualpa’s principal aim seems to have been preventing his brother from forming an alliance with them at this stage.

There is always in my mind a question about wargaming the Aztecs and, by extension, the Inca. I have probably said enough in the past to discuss the Aztecs, and the Inca probably follow a similar path. However, wargaming is a legitimate part of exploring history, and somehow I will struggle on. For the Aztec campaign I am using DBA; for the Inca, I decided to use my own WotCR rules, for no better reason than trying to develop them a bit. For this battle I added some ‘march column’ rules, allowing one base wide columns of bases to move at double speed, although woe betide them if they are contacted while so undeployed.

The forces were the same for each side. 6 bases of tribal foot, 3 skirmishers and 3 militia. I have no idea (I used to, but I’ve forgotten) exactly how the Inca fought, but I was not going to let a mere detail like that stop me. 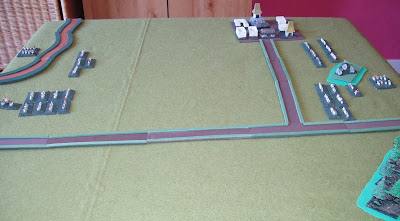 In keeping with my present ‘keep it simple’ approach, neither deployment was complicated. To test the march column rule Atahualpa’s men, to the left, deployed in columns (some of them) while Huascar’s were ‘semi-deployed’, to the right. The terrain was fairly simple – road, river, rough ground and a village. You might think the village looks more Aztec than Inca, but if I say it is an Inca village, an Inca village it is. 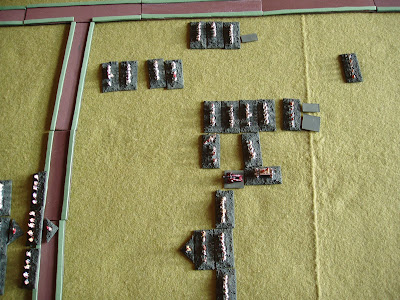 Huascar struggled to get his militia and skirmishers into the action, while Atahualpa had deployed his militia in line, so the main fighting was conducted by the warriors. The picture shows the main clashes. On Huascar’s left, the opposing skirmishers are in flight, but the charge of the warriors was blunted by them and the counter from Atahualpa’s warriors has routed two bases. Further to Huascar’s left two more bases of his warriors are locked in combat with a single opponent, but are not making a great deal of headway.

In the centre, Atahualpa’s skirmishers have withdrawn, shaken, and the warriors are now locked in combat, with the generals in control. Huascar’s men are, however, flanked by Atahualpa’s slightly superior numbers, and that was decisive. 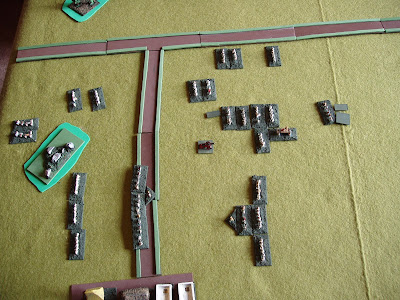 The picture shows the end of the game. Huascar’s centre is now being forced back, and the general has been lost as a consequence. The army, which had wavered, is now into withdraw mode and Atahualpa is victorious.

This was an interesting battle and I enjoyed it. The rules worked, but need a bit of development on how exactly you move from march column to deployed in line. I know how it should work, but writing it down in a manner I will understand in six months time is a bit more of a challenge.

Numbers were important here, even though the two sides were mirror images of each other. Atahualpa had the edge in the centre and it paid off. Husacar had more on his left flank, but they were held by a heroic single base of warriors (who, in fact, drove back twice their numbers). Dice can be funny like that. The involvement of generals in my rules is often necessary but is also highly risky. I will have to find out whether Huascar survived to fight another day or not.

The next stage is problematic, of course, because it involves small numbers of Spanish (Pizarro started with 168 men, I think). They did have a disproportionate effect on the battlefield, but we should not over-emphasise that. If the native rulers had been prepared to accept the casualties (or been able to due to local political considerations) the Spanish could simply have been swamped. As I recall, anyway, with the Inca Empire the more interesting actions were a bit later than the actual conquest, as the Spanish fought among themselves, with Inca allies. As I recall (I’ll have to do some more reading) the Spanish government tried to assert authority over the rather unruly conquistadors, and this led to cycles or civil wars and rebellions, let alone what the remnant of the Inca Emperors were doing.

As far as I recall, my Incas had not been on the table at all before this, although I must have had them for well over 20 years. I think it was the realisation that under DBR rules I needed a huge number more Inca to raise a second army to fight the first, along with a few Spanish, that rather broke my early modern wargaming morale and led to my fifteen-year exile in Ancients wargaming. But I think I’m back now...