It has all been a bit heavy duty this year – all battle reports which no-one reads and book reports (it would be incorrect to call then ‘reviews’) which most people ignore. Not that I am complaining; being ignored is one of the good things about blogging. You can, after all, claim to be doing things in public while no-one is looking.

Still, in an effort to lighten to mood, I have a few things to show. The first is this: 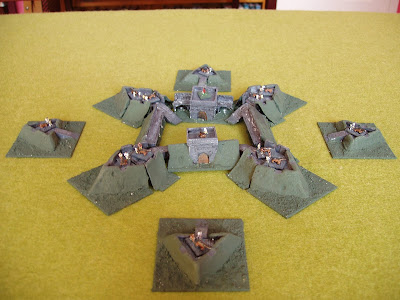 This is, of course, a Vauban-style‘ star fort’. The original is from Irregular, the painting and basing is my negative added value. It has to be said that it is a fair weight of metal. The guns, incidentally, are Langton naval guns, and the crew are from the same source.

You might very well object that there are gaps in the walls. Fair enough, there are. This is due in part to the way the fort is cast. If you look at the Irregular catalogue, you will find a picture of the said star fort. If you look more closely you will see that the picture is without the flankers to the bastions. It takes a little while to work out how it is all supposed to interlock, but it does, it is neat and ingenious. However, I am a wargamer who wants modularity in his scenic items, and so each piece has been individually based. Hence they do not really interlock any more. If I had put them onto a single base and filled the gaps, it would look more continuous, of course, but be less useful in a wagame.

I did, incidentally, consider the Leven alternative, but two things stopped me. While it is quite likely a very nice model in its own right it was a) a lot more expensive and b) a lot bigger. While the Estimable Mrs P is indulgent of her husband’s follies, a kit too big to use would not go down well in that quarter.

Still, in terms of the modularity I think it works, given that I can also do this: 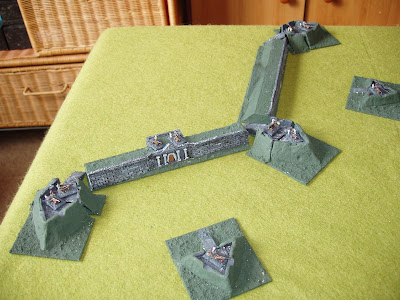 This is, of course, three bastions and two ravelins from the star fort with my very old Baccus walls (which have been painted / repainted), so I can also have a nice fortified town in the corner of the table. Again, I have ‘well garnished’ the walls with guns. The Langton guns and two crew fit nicely on a 10 mm by 15 mm base, which fits nicely in the ravelin and bastion spaces for them, and in the flankers. They also fit on the Baccus walls, as seen, but that was, admittedly, by chance. I also have extended my range of trenches, and also acquired (from the Irregular) some pioneers / sappers and painted up some officers and snipers (which I’ve had for years). I do not have any rules, as yet.

What, you might ask, are you going to do with all this real estate? I confess I am not entirely sure at this point, but a campaign will doubtless emerge. I feel an urge to return to Colonel Cranium; I am unsure as to whether the trace italienne was much used in early modern Muscovy. I have seen one work which categorically states it was not, and another which argues that it was. It might depend on which bit of Russia you are looking at.

Anyway, speaking (writing) of things Muscovite, the latest painting project (is there no end to the madness?) is here: 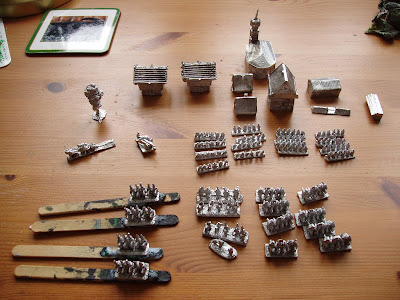 This is, of course, an Irregular Muscovite army – 15 bases of cavalry, 16 of infantry, a general, and a gun. Behind them is a Russian village from the same source. All that is needed now is for me to paint them. The cavalry to the left, incidentally, have been cleaned up and stuck on lollipop sticks for painting. They are the noble style cavalry, I think – the horses are barded. To my eyes, they look very much like the Ottoman Spahis of the Porte from Irregular, but then Muscovy was heavily influenced by its Mongol and Turkish inheritance.

This more than doubles my Muscovite forces, or will when they are painted. That might take a while, however. I have also, way too late, solved the lack of Russian-style buildings in my collection, a lacuna noted during the Great Northern War refight recently. It might inspire me to have another go; the pictures still raise a smile.

Anyway, the Muscovites and the village were a birthday present. My birthday, incidentally was in February and, when I unpacked the goodies as above to take their pictures, I happened to glance out of the window and noted that Russian reinforcements had arrived already. 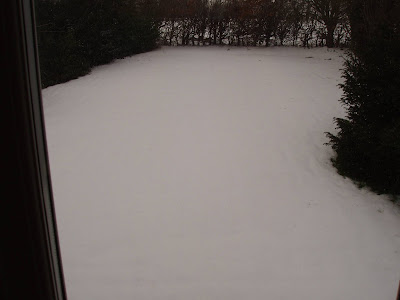 General Winter had indeed arrived in force, at least for this part of the world in the Anthropocene era. It looks a bit more impressive than it was; as the Estimable Mrs P observed there was enough to be a nuisance without giving us an excuse for not doing stuff. 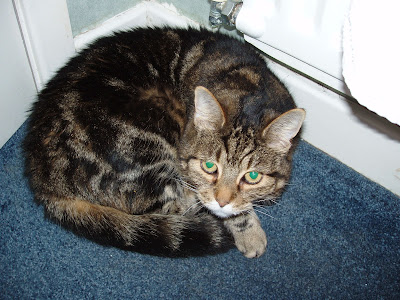 That expression on her face is the one she reserves for ‘What is that stupid human up to now?’ and she is, indeed, curled up next to a radiator. She remains there until later afternoon when the wood-burning stove is lit, and then adjourns to the living room to snooze with her chin on the hearth. All I can say is that some animals have the life of Reilly, except for passing humans with cameras.

The other thing I can say is that I expect a surge of interest in the blog now, as cat pictures are supposed to achieve a boost in views almost as much as pornography is supposed to.