Have army, will have wargame. Or at least, have a newly painted army, will want to get them onto the table. I do, in fact, have a campaign (of my normal narrative sort) in mind for the Hussites but decided that I really needed an experimental battle as a try out, to see how the war wagons performed on the table.

First, I needed some rules for them of course. While the Polish war wagons of my acquaintance have been seen before (in one of Colonel Cranium’s adventures) I am not sure they strictly got into action, and my current use rules (or ‘work in progress scribbles’, as they are more accurately known) do not have any guidance for them. However, my normal trusty cribs came out and they were added to the table easily enough.

War wagons were tough, of course. The whole idea of them was to provide cover and a stable firing platform for all sorts of missiles to be shot, hurled or projected at the enemy. Hussite wagons even had baskets of stones on board, which served two purposes. Firstly, the helped stop the enemy overturning the wagons, and secondly they provided a handy projectile resource for the defenders. I would imagine the rate of fire of chucking a stone at someone is rather faster than reloading a very early handgun.

War wagons therefore score a hefty plus four on the combat table, but can only fire to the side (strictly speaking, they can only fire to the left hand side of the wagon, the other side had a ramp for crew access). The Hussites had a neat formation for the wagons where they parked side by side, the body of one wagon covering the traces of the next. The horses were usually removed to within the laager before the shooting started. Within the rules (indeed, within all the rules that I have seen) this is abstracted away in the base. Who am I to argue with that?

Detailed historical research (I read the Osprey and another book) suggested a Later Hungarian army for the opposition, and so my trusty copy of DBA was tracked down and yielded up its goodies in the form of the two armies. Translated from the jargon, I got five war wagons, four Hussite foot with nasty peasant style polearms, one gun, one base of mounted crossbowmen and one base of noble knights. For the Hungarians, there were three knights, three light horse, two archers, one crossbow and one spear base and two crossbow skirmishers.

The classic Hussite tactics were to take a position on the top of a hill and await the lunatic aristocracy and their charge. Usually, at least early in the wars, the said lunatics obliged. Therefore, as a one off battle, I set the Hussites on a hill and deployed the Hungarians such that the knights would have a clear run at the upstart peasants who dare defy their social superiors. Not only that but they are heretics as well. 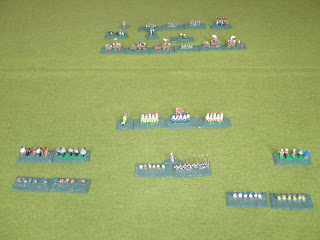 I doubt if I need to say it, but the Hungarians are nearer the camera. Most of the figures are Irregular, although I think one base (the Hungarian pike) is Baccus. I do actually have a fair few more war wagons than the five deployed here. The gun is probably anachronistic. Hussite guns seem to have been on trestles or mounted on wagons. I have a cunning plan for that.

For the Hussites, the battle proceeded as planned. The Hungarian knights, anxious to teach the heretic peasants a lesson, advanced rapidly and stalled at the foot of the slope occupied by the war wagons. 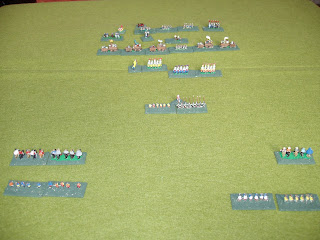 The war wagons can certainly lay down some significant firepower, but not enough to really damage the knights, although sufficient to prevent them from charging home. The charges, when they did come, were more piecemeal that the Hungarians would have liked. 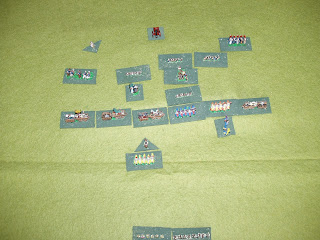 Under the tongue lashing of the general, the two rightmost knights have charged home. The left of these has pushed back the facing peasants, while the rightmost has recoiled the facing war wagon. As wagons cannot recoil, it has been lost and a gap has been opened in the Hussite lines.

Meanwhile, the Hungarians, perhaps detecting that resistance was stronger than at first thought, started to move their wings forward. The light cavalry on the left are skirmishing ineffectively with the rightmost Hussite wagon and the mounted crossbowmen. This was the first outing for the revised skirmishing rules, and the as wagon kept stopping the light horse from carrying out their orders. It seemed to work. 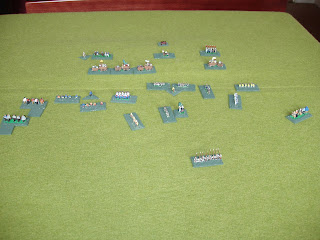 The end came when the Hussites, having rallied their knights and seen off two bases of the Hungarian’s ordered a general advance by the infantry. This destroyed the supporting Hungarian infantry, who can be seen fleeing in the centre of the field. Meanwhile, on the Hungarian left, the mounted crossbowmen and war wagons have caused significant damage to the skirmishers. You might also note that, after a number of close shaves, the Hungarian commander has also become a casualty, although initially Hungarian morale was not affected by that. At this point, however, Hungarian morale did collapse, although most of the remaining troops should be able to get away.

I have to say that I was quite pleased with the dynamic of this battle. The Hussite tactics of absorbing the initial charge on the wagons and then counter attacking worked. By the same token, of course, Hungarian tactics were as bad as they were historically. As a sudden war wagon bolt on to the rules I was pleased that not too much had been messed up. There are still a few issues, such as interpenetration and the declaring of charges while friendly troops are in the way (the Hussite cavalry had to dodge around a billman base).

A good time was had by all, apart from the aristorcratic Hungarians, and now I need to think of a campaign.