I mentioned before having an underemployed Ottoman army, so what better opportunity could I have to deploy it than a go at Otranto, as described a post or two ago. The lack of detail as to what happened was not going to deter me, of course. After all, I do have an ongoing Spanish Armada campaign based around the fleet landing near Whitby in North Yorkshire.

Not being one for too much historical research on what I have to admit is a bit of a side-line battle for me, I used the army lists from DBA for both the Ottoman side and the Neapolitans. They both came up looking a little odd to my mind – the Italians were gendarmes heavy while the Ottomans were azab light and only had one base of Janissaries, although the fact that a third of the army were light horse seemed reasonable.

Anyway, not having yet renovated my Renaissance galley fleets I decided that the Ottoman army would already have come ashore, and diced for their arrival side on the table. This meant that they arrived in a rather narrow pass between the sea and a stream and the walls of Otranto itself. 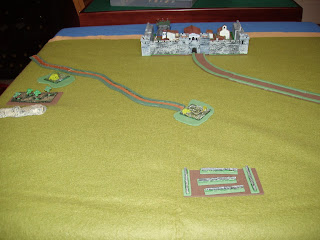 The photograph shows the peaceful scene. The Italian foot is within the walls of Otranto itself, while the Ottomans, doubtless cursing their scouts, approach from the gap between the stream and the sea. The relieving Neapolitan cavalry approach along the road to the right.

The buildings are Leven with I suspect some Timecast and Irregular, the troops (when you can see anyone) are my usual eclectic mix of Baccus, Irregular and, I think H&R. The walls of the enclosure in the foreground, and the fruit trees are Irregular.

Within the town are concealed three bases of crossbows and two of spears. The remaining Italian forces were five bases of gendarmes and a mounted crossbowman (and an artillery piece, on the end of the quay in Otranto. I know that Italian forces had largely concentrated on heavy cavalry in this period (because I have read Oman, like the good wargamer I am) but it does feel a bit odd.

Anyway, after a few moves everyone had arrived on the table. 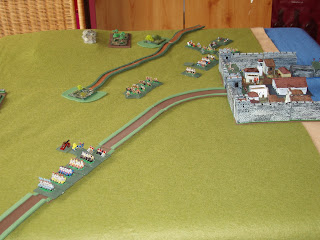 The Ottoman plan was to get the light horse into action against the relieving column, while the sipahis back them up, and the following infantry and gun come through to block any sally from the town. Unfortunately, marching past the city walls, in crossbow range, has already started to disrupt the plan. While the light cavalry are unscathed, the sipahis have taken hits and are stalled in a rather embarrassing position, under fire but unable to respond. 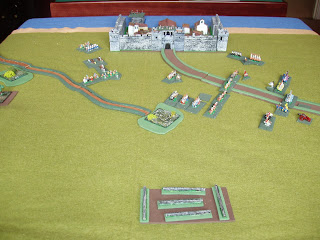 While the sipahi have managed to get away from the walls, the cost has been the breaking of the Janissaries by concentrated crossbow fire from the city walls, and their rout has swept away the supporting azabs. The general messing about has cost a good deal of tempo, and so the gendarmes have had ample time to deploy and hatch a cunning plan against the akinji. The two bases of gendarmes lurking by the city walls are just about in charge distance of the line of light horse. 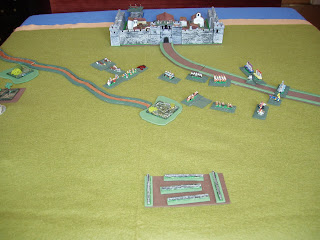 “And we’ll wrap it up there,” as someone says on an annoying TV advert. The charge of the flanking gendarmes has destroyed the akinji, the remnants of which are fleeing towards the camera. Along the way they have also accounted for a couple of bases of sipahi by crashing into their flanks while pursuing. The Italian infantry in the city were just about to sally forth to do battle with the infidel, but seeing the carnage before their doors and sensing a Christian victory, they decided to stay put and return to their cappuccinos.

Ottoman morale had, indeed, slumped to the lowest I recall seeing in one of my games – minus two on a zero to twelve scale. The heel of Italy had clearly been preserved.

After such a debacle, the honest wargamer has an inquest. Am I prejudiced against the Ottomans? I don’t think so – the terrain was, admittedly, against them but I did not expect the crossbow fire from the walls to be so effective. I did ponder the rights and wrongs of the routing Janissaries sweeping away their supports, but it does seem to me to be correct here. The fact that the sipahis were not properly deployed didn’t help either.

In the real life campaign the Neapolitans were heavily outnumbered and could only keep a watching brief on Otranto once the Ottomans had captured it, hoping, presumably, for something to turn up. That something did is not necessarily a tribute to their political leadership which struggled to raise much in the way of reinforcements. An organised army (or, possibly, navy) would probably have given the invaders a harder time.

So, was it a historical battle? Well, I have expressed doubts about more or less every aspect of it – the army lists, the accuracy of the landscape (I did not even Google Otranto), the Ottoman plans and, I suppose, I could further question the rules. It did not bear much resemblance to what I know about the history of the campaign. Admittedly, that is not much and it is quite likely that there is not much more to be known.

Still, it was an interesting action, if a bit of a minor and one sided one as it turned out. The best, I think, the Ottomans could have done was refuse to fight on that ground, but that was not really an option. The Ottomans are also, it seems to me, another example of an army that was usually in this time frame on the strategic offensive, but stood more frequently on the tactical defensive. Again, attempting to deploy to besiege a city is not really the time to be standing on the tactical defensive, at least, not until the army has deployed.