A Small Town in Bohemia

‘How do you spell that?’

‘Yes. Now, do you know which end of it to hold, and which end is dangerous to other people?’

‘Show us…. Yes, that’s right. Now, you see that bundle of straw with the turnip on top?’

‘I want you to imagine that it was a priest who had just refused you communion in both kinds. Now, what do you do?’

There was a blur of activity.

‘Ah, yes. Thank you. That’s fine. Sergeant, could you get us some more straw, please. And another turnip.’

‘I didn’t know you could do that to a turnip with a pitchfork.’

‘No, no, Jez, not wrong. I think we will recruit you, cart thirty four, I think, please.’

‘Which one is that? There are only three there.’

‘Why not call it cart number one?’

‘Because if we did that the enemy would know we have only three carts, one, two and three. But if we say thirty four, thirty five and thirty six, they’ll be expecting another thirty three carts along shortly.’

‘Here is the straw and turnip, sir. Would you like me to mop up the turnip juice before the next candidate?

‘It might be an idea, sergeant, thank you. I think this might be a long revolution, you know.’

The Hussites are back in town, as it were. Or at least, I have started to implement my vague idea for a narrative campaign with my newly minted Hussite armies. The outline above is the story of a recruitment drive. The Hussites are famous, theologically, for demanding communion in both kinds (bread and wine) at a time when it was only clergy who received both. The recent peculiar times have seen a return to the medieval distribution, of course, but this time for disease control rather than privilege of clergy.

Anyway, the Hussites have set out from their recruiting grounds and laid siege to a small town, held by a garrison of German crusaders. As you probably know, the Hussites were subjected to five crusades declared against them, which gathered forces from across Europe to duff up the heretics. The most consistent opponents were Germans, from the north and Hungarians from the east. To those of us brought up during the Cold War this still feels a little odd. Prague, historically, was at the centre of Europe, not behind some Iron Curtain of communist absolutism.

Anyway, the idea of the wargame is that the Hussites are besieging the town, the Germans are in it and the Hungarians are attempting to relieve them. I have, of course, therefore deployed two Hussite armies, one to keep the Germans in and the other to stop the Hungarians. From behind the Hungarian lines it looked like this. 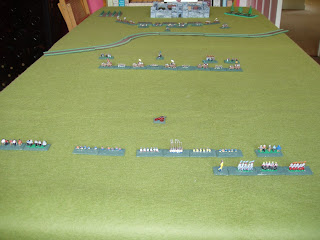 The Hungarians are nearest the camera, and then the Hussite blocking army (Hussites A in my nomenclature) on a hill, then the besieging army and the Germans are in the town. The deployment of the Hungarians might suggest to you that I am trying something different from the last battle, and indeed I am. However, given the historical propensity of mounted knights to gallop off at a moment’s notice to charge the heretic peasants, they need either the presence of the commander in chief of a dice roll of one to three to stay put waiting patiently.

After a brief delay, the German column, headed by dismounted men at arms, emerged from the town gate and advanced on the siege works. 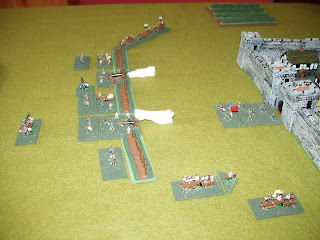 The Hussites moved their war waggons forward in an attempt to bring firepower on the column, while the bombards did their best and delayed the advance by some time. I think this is the first time the medieval bombards I painted just after Christmas have been in action. Mind you, it is also the first time the dismounted men at arms have been on the table top for a decade or so. The figures are Irregular and H&R, by the way. The castle and town are Leven, the trenches are very old Baccus, I believe.

The battle resolved itself into two, as you might expect. The first action was the Hungarians trying to break through the Hussite lines. The new tactics involved bringing up the infantry first to break the waggon line and then using the cavalry to outflank and destroy it. How well this worked can be seen in the next picture. 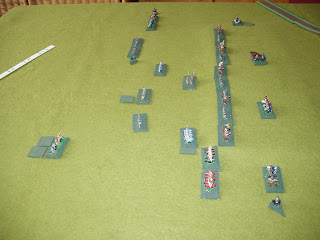 The infantry were held by the firing of the war waggons and failed to make contact, much like the cavalry in the trial battle. The knights eventually attacked on the Hussite left wing and were bounced, the general falling in the melee (such seems to be the fate of Hungarian generals at the moment). This did not much affect the morale of the Hungarian army, but it did inhibit its operations rather.

At the other end of the table, the German attack on the siege lines gained momentum, the dismounted knights driving deep into the siege lines and some spearmen breaking from the column to oppose the flanking war waggons. 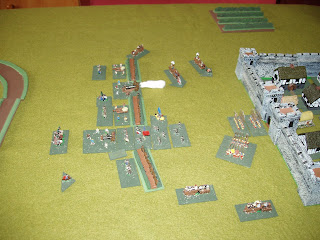 This was a close run thing as the Hussite billmen resisted and put to flight the lead men at arms, but their supports pushed the Hussites back. The charge of the Hussite knights nearly swung the action in their favour but not quite – the supporting pikemen saw off the Hussite cavalry and the detached pike accounted for one of the war waggons. 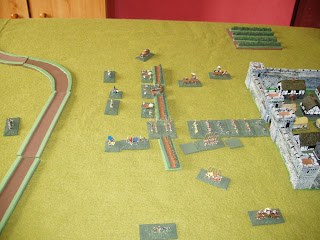 At the end the Hussite besieger army’s morale got to withdraw, and so they did. As maintaining the siege was the whole point for the Hussites, a general withdrawal followed, the besiegers covered by the field army which had stalled to Hungarians (but not beaten them, this time, as the Hussites had not counter-attacked).

‘Now Jez, calm down. We have to go because we’ve been ordered to.’

‘But we’re still alive! We fight on, we fight to win!’

‘Yes, yes, I know, but we need to make sure everyone lives to fight again, so we’re forming the rear guard.’

‘Yes, to, um, to prevent the heretic crusaders from dragging everyone to the gates of Hell.’