The Morning After the Night Before


‘My Lord, an army approaches from the north, over the hills.’

‘Oh, excellent. That will be My Lord Satsuma, coming to give us a hand.’

‘My Lord, another army approaches from the south, by the beach.’

‘Ah, splendid. That will be My Lord Mandarin, also coming to give us a hand. With these two, we should be in a very healthy place to deal with these natives.’

‘Um, My Lord Clementine. I do not think the army coming from the south is My Lord Mandarin. I think they are more, um, Koreans – natives, I mean.’

‘Oh. In that case, we might have a busier morning than I hoped for. Still, the rest of the men are ashore and some of those who got wet have returned, so we are in a good place.’

And so the struggle for Eppeid continues. Lord Clemmy, had, as you might recall, retired into the town with the troops he could muster after a bit of a semi-failed invasion type thing. A bit of dice rolling established that some of his routed troops returned to the fold, and that the remaining two bases of his forces landed in the night, enabling him to line the perimeter of Eppeid with men to hold off the victorious Koreans.

The Koreans had their own problems, of course. Similar dice rolling meant that fewer of their men returned to the colours, and the Korean commander was wondering how he was going to deal with the loons called Samurai, who were so very tough to beat even in the open. How it would work in attempting to storm the town (where the defenders would get a hefty plus two on the dice) he really did not wish to find out.

The initial dispositions are here: 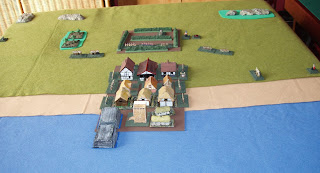 The terrain is, as you will note, the same as the last time, but Clementine’s army is now deployed on the perimeter of the town, while the Koreans are in containment positions to prevent a break out. The command groups to left (Japanese) and right (Korean / Ming) mark the location of the entry of the reinforcing armies. Their arrival was diced for – inevitably they both appeared on the same move, turn three.

I had to invent a few rules to make the game work, principally around having four commanders on the table at once. I cobbled together a process of having a senior commander who did the allocation of tempo points, having rolled two dice. It seemed to work and ensured there were sufficient points around for the armies to do stuff. 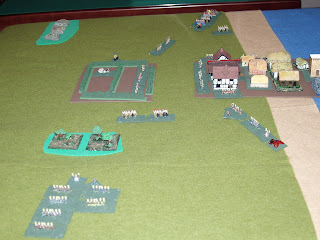 The first few turns were fairly desultory while the reinforcements turned up, the action being limited to an exchange of fire between the town and the enclosure behind it, in which no-one was, apparently hurt. Things livened up a bit as the reinforcing armies arrived and plans became clearer.

In the distance the Korean / Ming army (OK, it is Korean, but I ran out of Koreans, is that fair enough?) are advancing, while Satsuma and his men are aiming for the orchard and the Korean rear. Meanwhile, Clementine has sallied forth and the Korean cavalry on this side has decided to beat a retreat, so as not to get trapped.

A turn or two later and it has all got a bit complicated.

The remainder of Clementine’s forces have also sallied out (aside from the shot, still banging away uselessly at their Korean opposite numbers), while the Korean horse is moving around the back of the enclosures to deal with Satsuma’s men – the Korean commander had been sufficiently impressed with the ability of his cavalry to deal with Samurai in the last battle, that he intended to do the same with them this time.

Now, it got really messy. 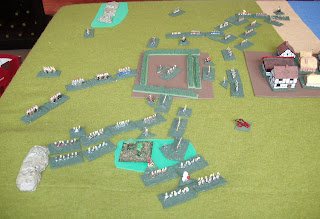 Satsuma’s men on the Korean left are having a huge fight with the Korean foot and, while heavily outnumbered, are holding their own or better. I told you the Samurai were tough. In the centre, Satsuma’s men from the town have been forced by considerations of space to enter the enclosure and have routed the rocket launcher (which had returned to normal form and not hit anything) and some of the Korean foot. On the Japanese left, a confrontation between Samurai foot and Korean cavalry seems inevitable.

The end came more with a whimper than with a series of bangs. 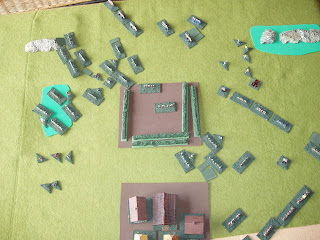 The attack of the Korean horse delayed and blunted the Japanese advance, forcing the extreme left up the steep hill (where the cavalry could not follow, of course) and, in fact, getting Satsuma himself. On the Japanese right, however, Korean numbers are telling and their firepower is looking dangerous, although the lone Samurai base there had just survived one massed volley (a six – one roll, just not Korea’s day, I think). The Samurai in the field has just routed a Korean cavalry stand, however, and at that, the Korean morale went to one above ‘withdraw’. As the Satsuma army still looked dangerous, albeit leaderless, and the Clementine army was undefeated, the Korean commander decided to live to fight another day and withdrew his men.

‘How are you feeling, Sat?’

‘I got a Korean lance through my leg. How do you think I’m feeling, dimwit?’

‘What are we going to do now?’

‘We won, didn’t we? We continue with the plan.’

‘Um, what plan? We just decided to invade. And here we are.’

‘Mandy, I think we had better arrange for Lord Satsuma to be evacuated. Delirium seems to be setting in.’

‘He does have a point, Clemmy. I mean, if we go home now what will we have achieved?’

‘Fame? Some of us achieved desperate deeds of derring-do, after all. The bards will sing of my holding the town against the odds….’

‘….the odds and then sallying forth to rescue my friend who had marched to my aid.’

‘Clemmy, I think you’re getting delirium as well…’