The Escalade of Al-Hambra

‘There don’t seem to be many of them there.’

‘We should just walk up the road and take possession. Piece of cake.’

‘By your tone of voice, man, you don’t agree. But you can’t disagree with the royal eyes.’

‘No, sire. But there are plenty of hiding places for light troops, aside from any they’ve got in the town itself.’

‘We shall advance with caution.’

Well, King Ferdinand and his merry men have now been persuaded to assault the town of Al-Hambra which the castle, the focus of recent events (see the Reconquista page to the right for the whole saga) was guarding the access to. After a slight pause, to allow me to paint two storming parties, the Castilians are now moving on the town. 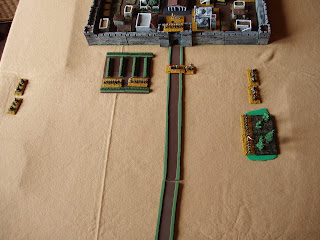 The picture shows the Nasrid deployment, in ambush, awaiting the Castilian rush on the town. The plan was to pepper the Castilians with crossbow fire and jinites, not allowing them to deploy and holding them away from the walls of the town. This seems, so far as I can tell, historical tactically.

The scenario also saw the deployment of more or less every Middle Eastern and Mediterranean type building I have. The town sees a fine mix of Leven, Timecast and Irregular buildings, including two mosques from my Leven Christmas box. The figures are a mix of Irregular and Baccus.

The Castilians advanced from the side of the table nearest the camera. To the untutored eye, Ferdinand was proceeding very carefully. In fact, he was merely suffering from a tempo point drought, but the effect was the same. 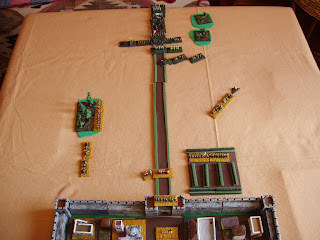 Mostly using the general’s personal tempo point, Ferdinand is attempting to counter the Nasrid skirmishers on his left with his own jinites (who are suffering a bit) while deploying his infantry. He has also managed to restrain his heavy cavalry from doing anything except shield his deployment. It was at this point that I realised that the battle as an escalade, a rush over the walls, was not going to happen. 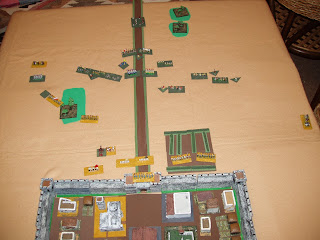 The end of the battle came when the Nasrid jinites were defeated. The right-wing jinites were outgunned by their Castilian counterparts. On the left, and a sneaky trip around the left of the wood to take the Castilians in flank started to work, but then the jinites strayed into charge range of a base of men at arms who made short work of them, pursued up the hill, rallied, turned and charged down the hill to finish off the second base. At this Nasrid morale slumped and the army started to withdraw.  After some debate within the town, it surrendered on terms.

The thing is about this one is I have started to wonder if the Nasrids can win at all. It is quite possible that due to the Castilian heavy cavalry being, well, heavy cavalry, that they have no answer to that. In both the relief of the castle and here, a lot of damage was done by the gendarmes without much riposte possible. All right, I made a mistake above and the jinites strayed into charge range when they should have pulled back  a half move, but they do find it pretty hard to make an impression on the metal men anyway.

The other thing I have to decide is whether the campaign is at an end, or Ferdinand and his men go on to try and achieve some more. Historically, Alhama was the first town to fall to the Spanish in 1482, and it was in a fairly exposed position, necessitating a number of relief expeditions. Ferdinand and the Castilian army also spent a fair amount of time, not always successfully, trying to open up better supply routes and security for the place, including the unsuccessful siege of Loja and a couple of sharp defeats in the mountains, due in part of Castilian overconfidence.

The fact that the campaign, as conceived, is run is no real excuse for stopping it, of course. Campaigns, as Tony Bath famously observed, can grow. Add to that the effort I expended in painting assorted jinites, handgunners , crossbowmen and spearmen, plus a castle, siege equipment and even two storming parties (who were on the table in the photographs above, by the way. The eagle-eyed among you might be able to spot them). The other thing that could happen was a Nasrid strike in retaliation. In fact, the Castilian strike on Alhama in real life was in retaliation for the surprise of Zahara. This was viewed as simply an extension of the border wars of the time, although some wiser Muslims were alarmed by the attack, reckoning, quite rightly, that with Aragon and Castile united and secure from external foes, the capture and enslaving of the population of Zahara was an unnecessary provocation.

‘Your Majesty, the Queen.’

‘Sing to the Lord, for he has triumphed gloriously; horse and rider he has thrown into the sea.’

‘Izzy, dear, we’re nowhere near the sea. And what is that awful noise from that thing you are rattling? And why are you wearing that blue uniform?’

‘Oh, I’m just getting a bit carried away with your wonderful victory, Ferdie. It is just like a crusade of old, with noble knights going forth with valour and chaste chivalry….’

‘I’ll give you chaste. The orders you sent to my bodyguard were very strict. My only entertainment has been singing soldiers. And they fight a lot better than they sing, I can tell you.’

‘And look what you have achieved through it!’

‘That is all very well, but I could have achieved as much with some more varied entertainment.’

‘I’ll make a note for your next campaign dear. What would you like? The choice is epic poetry, the latest Scholastic theological debate or folk songs from Galicia.’

‘I wasn’t thinking of any of them, Izzy.’

‘No, I know you weren’t, but that is the choice you have. Anyway,’ the Queen moved closer and whispered ‘Send the servants away and then you can investigate what underwear I’m wearing today.’