‘You know, we can’t just sit around enjoying ourselves all the time, Clemmy.’

‘No. I’m sure it says in the warrior code somewhere that we can’t.’

‘We could fight each other.’

‘I think the Shogun would be a bit unimpressed by that. After all, he threatened to decapitate anyone who drew a sword in anger in the land.’

‘It wouldn’t be in anger, more sort of out of boredom.’

‘I’m not sure the Shogun will be willing to take the time to listen to the differences. I value having my head and shoulders connected, even if bored.’

‘Hm. Then it will have to be somewhere else. Maybe we should join the invasion force.’

‘Yes, but that would mean we had to take orders from Tango. I don’t trust him, and he doesn’t like us.’

‘Maybe we could officially unofficially join in.’

‘I mean say we’ll help and then do a bit of invading on our own. I know, we could ask Mandy to join us. He’s got some cavalry.’

‘You mean the three of us just go and invade Korea, like, on our own?’

‘Yes. I know. We can land at Eppeid. There’s a good beach there.’

‘What if there are defenders?’

Satsuma pursed his lips. ‘I know. You land directly at Eppeid. Mandy will land north of the town and I’ll land south of it. I think the ground to the north is best for cavalry. Then if you run into trouble we’ll come and help, and so on. Deal?’

I have just finished painting two DoJos from Leven Miniatures. They are, in fact, the last relics from my Christmas buildings box, and so I’m rather pleased with the lightning speed of my progress. Thus a campaign was born, or rather a return to a campaign I ran probably over 20 years ago, with three Japanese Samurai armies invading Korea, which eventually received reinforcements from Ming China and the Manchu. Thus the six armies are that of Satsuma, Mandarin and Clementine on one side, with the Koreans, Ming and Manchu on the other. Dice and prejudice will, of course, decide what happens this time – the original used a map but these days, I can’t be bothered.

The battlefield was diced for, except for the sea, beach and port, of course, and came up looking like this. 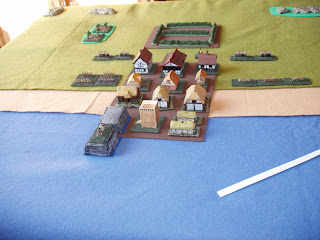 The Korean defenders rolled quite well for their alertness before the invasion, so are deployed, arquebusiers and spears to their right, archers to their left, both backed up by cavalry. They also deployed a rocket unit, on the jetty of the harbour. The general is lurking behind the town.

The buildings are a mixture of old Hovels card, Timecast and Leven, including centre back a DoJo. The jetty and orchard trees are by Irregular, and the rocky outcrops are Leven, again from the Christmas buildings box.

The Japanese arrival was dice controlled, but they landed up with a fairly even distribution across the board. The situation just before they hit the beach was as follows: 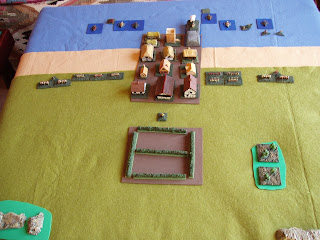 The first wave, of course, consisted of the Samurai, although it can be seen that the rockets are taking a toll on the boats nearest to them. The Korean cavalry is moving up, as well. I decided to fight them on the beaches.

The fighting on the Japanese right was confused, as they say. The cavalry hit one of the newly landed Samurai bases and routed it. The other bases, including the general, hit the Korean bows and routed two bases of them before the Korean cavalry returned and destroyed another Samurai base. On the other flank, there was a long standoff between a Samurai base and the massed gunpowder weapons of the Koreans, and a lengthy struggle between two Samurai and the Korean cavalry on that flank. The rockets, meanwhile, kept on chipping away at the Japanese floating assets, taking out two bases and their embarked troops. The left flank Korean cavalry accounted for another boat. 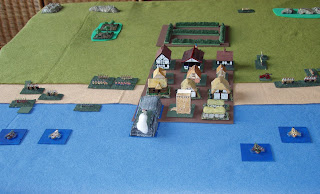 The end came rather messily for both sides. The left hand Samurai base saw off its cavalry opposition, while the arquebusiers finally destroyed their opposition. The second wave of the Japanese invaders staggered to the beach, landing two bases on the right and one on the left. The rightmost ashigaru were immediately destroyed by the Korean cavalry while the arquebusiers opened fire and then headed for the cover of the town. At this point the Japanese morale went to ‘withdraw’, and I stopped the game. 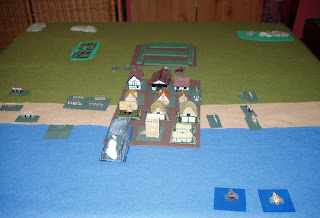 The Samurai bases proved themselves to be tough, really tough: plus four in combat plus an extra one for being elite. However, the army as a whole suffered from incoherence in arrival, lack of cavalry to counter the Korean mounted, and that rocket launcher which caused considerable damage to the invasion boats. As the picture shows, the only refuge for the remaining Japanese forces is the town, where they will benefit from cover and be safe from the Korean cavalry. I now have to work out what happens next.

‘This had better be important. I’m still changing my socks.’

‘I have news from Clementine, sir.’

‘Ah, excellent. He must have taken the port. We shall dine on fine fish this evening.’

‘Well, my lord, Clementine and his army are sort of in the town…’

‘What do you mean, ‘sort of’? Either they are in the town or they are not. Which is it.’

‘Some of them are, my lord and some are, um, elsewhere. There was a Korean army defending the port. Lord Clementine and his remaining men are in the port, expecting your aid, sir.’

‘He says it was bad luck, sir. The Korean cavalry caught his men on the beach and they had some infernal war machine to sink his boats with.’