The Relief of Castillo Al-Hambra

To His Majesty Ferdinand of Aragon, Commander of the joint Army of Castile and Aragon,

We offer you our greetings and congratulations after your victory, under God, over the foes obstructing your path to our rescue. After your success, sire, the enemy have intensified their efforts against us, and have now built an infernal war machine or trebuchet against our walls. Our Christian hearts are stout, sire, but we doubt the masonry will hold much longer. We are in desperate need of your assistance.

‘There is no rest for the wicked, is there?’

‘But they haven’t given up, have they?’

‘Not even a little light entertainment on the side.’

‘The Queen’s orders were most direct and explicit, sire. You were offered an amusement of martial airs.’

‘Hardly an amusement, is it? I need to be distracted, not reminded that I’m in the middle of a campaign.’

‘Some of your illustrious forebears, sire, relished the prospect of martial activity and manly prowess.’

‘I prefer to display my manly prowess in other arenas.’

‘The Queen’s orders were most direct and explicit, sire.’

In my terms, the Castilian army was permitted but moments (i.e. a few weeks) respite before the next instalment of the Reconquista got moving. The Spanish Moors (Nasrids – nomenclature is difficult as both sides were Spanish) were still besieging the castle, and so Ferdinand had to get his army moving again. The Nasrids were not particularly keen on carrying on the siege of Castilo Al-Hambra, but as I have now finished painting some siege equipment, I did not let that stop me.

The Nasrid lines are here, together with their deployment against the Castilian attack. 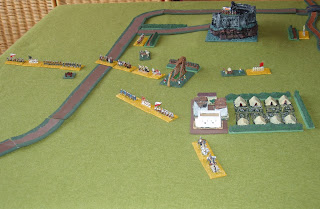 The Nasrid plan was to envelop the Castilian column with skirmishers, hence the horseshoe deployment. As siege equipment, you can see the trebuchet and two catapults in the lines, and a depleted force of besiegers in the trenches and protecting the equipment.

The Castilians appeared in their corner, with only a little space to deploy. Ferdinand’s plan was to mask off the Moorish wings with his own skirmishers and smash through the centre with his gendarmes, backed up by the bulk of his infantry. 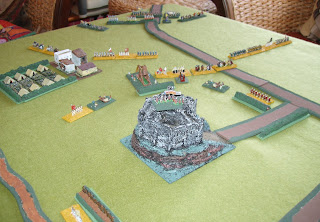 This picture shows a gratuitous close up of the trebuchet, which is a big beast, and you can see why the garrison was perturbed by its presence. Many of the troops and the siege equipment are by Irregular, the rest is Baccus except for a base of Heroics and Ros crossbowmen. The buildings I am not entirely sure about, I think some are Timecast and the others are Irregular. 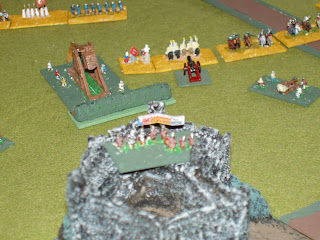 It has to be admitted that Ferdinand has the hallmark of a great commander, at least according to Napoleon. He got (again) lucky. An alternative way of viewing this was that the Nasrid dice rolling, when it really mattered, was appalling. Ferdinand’s plan worked sort of smoothly. The initial contacts on the wings were sufficient to nullify any impact from the skirmishers on the advance. The charge of the gendarmes was disunited. Only one base struck home, but then the Nasrid dice gremlin kicked in and the contacted crossbowmen were routed. Not only that but the Nasrids managed to roll -5 on the morale dice, which meant that all their advancing reinforcements from the siege lines halted as the army wavered. The next base of gendarmes then struck the Nasrid spearmen and blew them away too, while the pursuit of the initial base led it to contact the trebuchet and crew and overrun that.

Ferdinand even had sufficient tempo points at this time to signal to the garrison to sally, while the Nasrids threw a further -4 on their morale to hit rout. I told you their hearts were not in it any more. 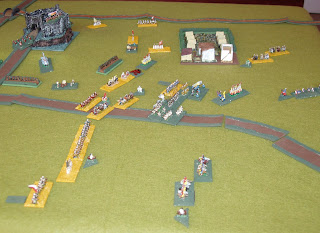 The final position is above. The Nasrid centre has been blown open by the gendarmes, who can be seen careering around in their centre and rear. The garrison is emerging from the castle and the Castilian infantry are about to start mopping up the remains – they have not even deployed in extended order as yet.

It was quite an entertaining battle. I am still working on the balance of shooting combat outcomes, having reverted to the original ones. I think they work better, although they might make shooting a little more deadly than it was. On the other hand, it does give skirmishers a reason to exist on the wargame table. Another issue raised is that of heavy cavalry charging infantry, which they can do from outside infantry firearms range. Part of me wants to say this is fine; part of me wants to give the infantry shooters a chance. But that chance could be in the tempo bidding and also in the concept of close combat which includes shooting at close range.

Or, maybe, I need a lie-down and an opportunity to stop overthinking things.

‘An army whose main tactics are ambush and skirmishing is always going to struggle defending a fixed position, sire.’

‘Are you trying to denigrate our victory?’

‘No sire, but there is here a new letter from the Queen.’

‘Um. Much of it is highly personal, sire. Perhaps you should read it in private.’

‘Just read out the public bits.’

‘Are you sure this isn’t a personal bit?’

‘Yes, sire. “I desire you to proceed with all alacrity to the town of Al-Hambra. After your success at the castle, the town must lie within your grasp. The demoralised enemy, having fled from you twice now, will do so again and the town will be ours. I will despatch with all due alacrity our siege train to aid you in this task. Should the enemy prove to be stubborn, I will come myself to the camp to encourage you, and reward you in the only way a dutiful wife can….” Um. It gets a bit personal again after that, sire.’

‘So now we have to go on and capture the town?’

‘And still no entertainment?’

‘Not until the Queen arrives, sire.’