The Battle of the Friarage

‘Do you know where we are Jock?’

‘They are just fields, Jimmy. Nothing to worry about. Just fields.

‘But this is where the battle of the Standard took place, Jimmy.’

‘The battle of the Standard.’

‘It was a terrible defeat for the Scots by the English. The Archbishop of York came with the Holy Host and routed and killed us and we fled home.’

‘They can’t have killed us and we fled. It has got to be one or the other.’

‘But we were fighting the Host. You know, the bread and wine.’

‘Don’t be daft, Jock. You can’t fight bread and wine.’

‘But what if these Spanish have got it? We’re doomed.’

Another week, another try at the Northallerton battle which frustrated me a bit ago. I decided to set out the same terrain (at least, as near as I could get it) but modify the deployment. Both armies this time deployed to the west of the town, rather than in the original, more easterly positions. 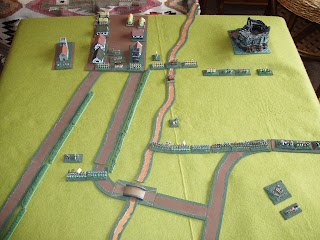 After the contretemps last time, both cavalries were furthest west. King James deployed his infantry with pikes opposite the Spanish demi-lancers and his own cavalry further right. Don Carlos deployed more tightly. He was, after all, fighting a defensive battle. He lined the town and the immediate area west with infantry, hoping that his main strike force, the cavalry, would see off the enemy foot. James ordered his left flank foot only to demonstrate against the enemy, hoping his advantage on the right would pay off.

The following photograph shows the ‘crisis’ of the battle, with the Scottish horse running rampant. 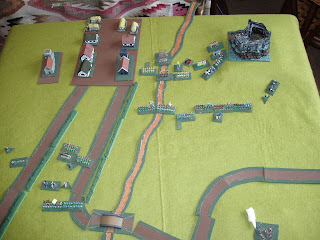 The Spanish demi-lancers had charged the Scottish pikes, but the latter had held them (impressive Scottish dice rolling, really), and then recoiled them the next close combat round. The infantry to the left of the pike had, with impressive shooting, shaken the Spanish gendarmes and they refused to charge the musketeers in front of them. Further damage was being caused by the rest of the Scottish foot on their opponents, too. On the left, James’ troops are withdrawing in the face of an aggressive advance by the Spanish, hoping that they won’t run out of table before the lancers hit home.

The recoiled Spanish demi-lancers were then hit in the flank by the Scottish cavalry and swept away. The Scots went on to hit the shaken lancers and disposed of them as well and then took out a base of arquebusiers. At this point, Spanish morale cracked and the army went to withdraw mode. 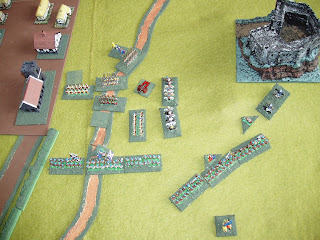 The photograph shows the final positions west of Northallerton, showing the shaken Spanish infantry of the first line. Don Carlos, intelligently, moved his pike reserve across to his left before the crisis hit, and they will form the rearguard. The only road even slightly open to the Spanish is the one back across east towards the North Yorkshire Moors.  As you might recall, the combined Scottish and English light cavalry have taken the bridge there, and the English have been digging in, so Don Carlos’ men are not out of the woods yet.

The Spanish figures, incidentally, are Irregular, while the Scots are Baccus, except for the gun (which banged away all afternoon with no effect) and King James himself. The Irregular figures are mainly from the Italian Wars, with arquebus and pike also from the mid-Sixteenth century range. I think I mentioned last time the houses and castle being a mix of Leven, Baccus and Village Green.

I also think I need to do something about my roads, rivers and streams. They are made from Fun Foam, which is very easy to work with. The banks are glued and flocked with chinchilla dust and then painted, while the water is painted mocha (no, really) colour and then varnished several times. However, as you can see, the strips tend to curl up a bit in storage. I have two ideas in mind. First, I can remake them using my original plan, which was to glue a strip of green foam to each side for the banks. I tried this out and rejected it, originally, because it made the roadsides about the same height as a musketeer. Maybe, in retrospect, this is not such a bad thing. I did this with a few bits of road when I started and the examples are still flat. I think part of it was wondering if I could get the banks to align with the rivers and road on, say, bends.

The other idea is to use magnetic base on the undersides of the foam, to keep it flat in storage and, possibly, to add a bit of heft to the strips to stop them sliding about. I am a bit concerned, however, that the foam will simply sag between the strips of magnetic base.

I am still musing on that one. As an alternative, I suppose I could buy some of these latex roads and rivers you see about, but they always seem a bit pricy to me.

Sir, I regret to inform you that the Scots attacked our position in the town of Northallerton, and have forced me to retreat along the road to Ellerbeck. I cannot retreat to the south because the English army is in Thirsk to my rear, and west would be to take us towards the hills and further from your succour.

I beg you, sir, to come with all your strength towards Eller Beck and there meet with my men who have suffered so much from these wild northern hordes. I fear that the English fort at the bridge will make things difficult for my army unless you are there to aid us.

In haste from Northallerton, at the sign of the Golden Lion