The Game Fights Back

‘Are you out of your mind?’

‘I mean – look at it. This deployment. I would never do that. I’m not sending my men to suicide.’

‘I’m the boss; you are a six-millimetre general. You will do as I say.’

‘Don’t you think you should keep out of this, Don Carlos?’

‘No. Have you seen the deployment you have foisted on me?’

‘Of course, I set your troops out, remember. And got you out of the box too.’

‘But look at it. My main strike force is the cavalry and you’ve deployed them at the back of the right flank, behind the infantry. And my left flank is in the air. I think you are mad.’

‘I am the wargamer, you are model generals. You will do as I say.’

‘But you are asking me to send my men up narrow lanes lined with hedges into a hail of fire. There are much better deployments than this. There is a socking great hill over there, just right for the artillery. Can’t we….?’

‘It is no good, James. He has deployed and you know he can be obstinate. I’ll tell you what, what happens in this battle does not count, OK? We’ll just go through the motions and then forget about it. Maybe he’ll learn.’

‘And maybe he won’t. He’s not given us enough room to manoeuvre, you know.’

‘Look, throughout history generals have not been given enough room to deploy just as they wanted…’

‘But here there is sufficient room. You have just ignored it, you wargamer numpty.’

‘Can we get on with the game now?’

‘We both wish to register our protests.’

‘All right, all right. Noted. Now let me start rolling the dice….’

I do not know if this has happened to anyone else. I am, of course, referring to the Battle of the Friarage, in Northallerton, part of the Armada Abbeys campaign. The Scots are advancing south to hopefully force Don Carlos’ Spanish out of the town. I set the terrain up, and thought it was very nice, and deployed the armies. Something seemed a bit wrong, but I over-rode the quibbles and set to. But that something niggled away at me, and eventually I abandoned the battle. The dialogue above suggests at least one of the problems (although I do not, in real life as opposed to the blogosphere, argue with my toy soldiers. Not yet, anyway.)

My usual approach to such quibbles is to declare what happens on the table stays on the table. That is, even if I change the wargame rules, decide that I did something wrong in the execution of the game, or that it was the wrong game, the result still stands. But there was something else here, and I am not sure what it was. 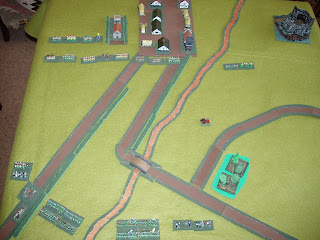 Northallerton Castle is at the top right and the road to the right of the picture loops around Mount Pleasant, a bit of a hill. The stream is fordable. The ecclesiastical edifice to the left of Northallerton is the Friarage, while the one in town is All Souls. The Scots are Baccus figures, the Spanish are Irregular, as are the trees. The castle is, I think, from the long-defunct Village Green, some of the buildings from Baccus’ long-defunct resin range, the rest from Leven.

As I said, I looked at the deployment of both sides and did not like it. But, ignoring the advice of my generals, I ploughed on. The Spanish redeployed their right-hand infantry through Northallerton to the left. The Scots advanced up the ‘tunnels’ made by the hedges. The Scottish lights made short work of the Spanish foot skirmishers but, while they kept hitting the light horse, they inflicted little damage, even refusing the charge them when they were shaken and outnumbered.

By the time contact was made I was really unhappy with the game. Neither side was particularly winning, although the Spanish cavalry was looking menacing for the Scots horse and gun. A lot would depend on who won the tempo in the next turn or two, and whether the Scottish artillery could disrupt the Spanish cavalry.

By this time I more or less gave up and admitted that I had messed up the deployment for both sides. I tried to justify myself by arguing that in real life mis-deployments were quite frequent and that soldiers just had to get on with it. But to no avail. I had lost heart. The lack of narrative for the start of the battle and the poor deployment by an addled wargamer had spoilt the whole thing. I decided I had to break my cardinal rule, and stop the battle. I debated whether to allow King James to withdraw with dignity, but he spluttered a bit into his beard while Don Carlos shrugged in that expressive way that only our Latin cousins can manage.

Back into the box went the troops. To be fair, I kept them in their deployment rather than storage boxes (I have a system where, because these troops come from ECW, Italian Wars and the Scottish ECW boxes, I assemble the armies beforehand in an otherwise empty box). I debated whether to leave the terrain set up; as I noted before, I quite liked that aspect, but common sense prevailed and it, too was cleared away. Ho-hum.

So, the game, or my lack of perceptive deployment, rather spoiled everything. Is it just me, or is this a common experience?