I was admiring the collection of boxes containing my rebasing efforts recently, and wondering what I was going to do next. The Scots in the Armada Abbeys campaign need reinforcements (some more light cavalry, which are undercoated but unpainted), so it was not to be them. Alexander IV is still sunning himself on Ibiza after defeat by the Moors and I am not quite sure how he is going to stage his invasion of Spain, or, indeed, which troops he is going to use, the infantry mostly having surrendered in Africa, you might recall. The Aztec campaign (have patience, an account will be coming) needs a decision by the Emperor as to whether taking on 18 bases with 11 in DBA is an altogether sensible idea and the Reconquista campaign needs a bit of head-scratching.

Still, it is nice, as the Estimable Mrs P observed, to have the range and choice. I made a list of my armies (those that are based and ready to go) and ticked off those that I recall having in action recently. I also observed the position of the boxes in the cupboard and aimed for the ones on the lower echelons, on the basis that they would less recently have been in action.

The upshot of this was that I came up with a shortlist involving early modern Ming, Manchu, Samurai and assorted East Asians, South East Asians, or ancient Persians and Indians. An arbitrary decision was clearly required, and the South East Asians it was.  I fancy that the Persians and Indians can be accommodated in the Alexander IV campaign, but I will have to wait and see, although some of the Indians did make an appearance in the recent Moghul bash.

The next challenge was for a scenario. I am not a fan of a ‘just line them up and bash the enemy’ sort of game, and I like my wargames to be given context by a campaign. I am in possession of Grant and Asquith’s Scenarios of All Ages, and so managed to pick an interesting looking starting point, although, of course, I completely ignored the army strengths and most of the terrain requirements. 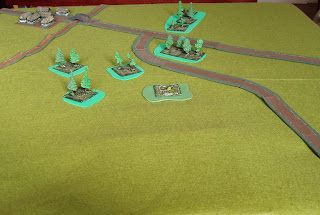 This is my interpretation of the disputed village scenario, that village being top left in the picture. The Vietnamese approach from the centre-right, while the Khmer appear in the bottom right. The slightly lighter area closest to the camera is, in fact, a steep hill. The Grant and Asquith map has lots of woods and a marshy area, which I have sort of replicated (although without the getting lost rues, or quite so many tracks). The stream has a bridge and a ford.

The roll of some dice indicated that the Vietnamese arrived on table a turn before the Khmer. Once both armies were fully on table, it looked like this. 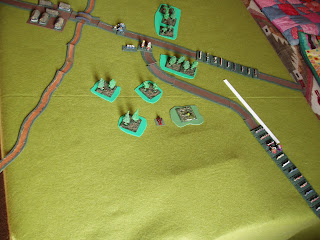 The Vietnamese plan was to fill the largest woods with skirmishers, hold the bridge with one of their elephant bases and pepper the Khmer with rocket fire before launching their infantry at the hopefully disrupted enemy.

The Khmer plan was a bit different, and had one eye on the winning conditions which were the occupation of the village. The stream was fordable (and had a ford in it as well) and so the Khmer skirmishers were dispatched that way to cross the stream and occupy the village, while the rest of the army entertained the enemy.

The end game is here. 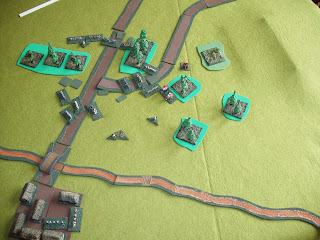 The Khmer plan worked the best: their skirmishers are in possession of the village, as you can see.  They have, in fact, just finished off the Vietnamese elephant that was supposed to be guarding the bridge which had, perhaps incautiously crossed the stream to see them off. An unsupported elephant base in a built-up area against skirmishers was never going to have a happy ending, perhaps. The Vietnamese general has also just met his end against the Khmer general supported by some infantry, although the Vietnamese general had just seen off the Khmer cavalry. At this point the Vietnamese morale collapsed. Mind you, they had lost seven bases including the general, so no wonder.

The game did bring up a number of questions, of course, the first being: what happens next? I will work on that. Another question might be: I thought early modern armies had firearms, and that, of course, is true. Perhaps in the next battle in the campaign there will be said creatures (not just a rocket battery which failed to hit anything all game).

The troops on table, incidentally, are all from Irregular. They are a fine mix of medieval Asian ranges and colonial types. The general’s elephants are, I think, from their Indian range (at least, they came from my Moghul box), and the rocket launcher is from the Chinese range. The buildings are also from Irregular, actually from their Aztec village (the Estimable Mrs P thought they looked like English hovels, but that is probably my painting), and the bridge is Leven. The trees are Irregular (I told you I had trees).

You might wonder how, in a narrative campaign, I can get away without much of a narrative. Well, I suppose for a wargame sequence you do not much need the exchanges that I have created for the Armada campaign, although they do add a bit to the fun. And I know little about Vietnam, Cambodia and other points South East Asian, my knowledge being limited to a little bit about the Vietnam wars post-WWII rather than anything sixteenth century or thereabouts. I could start making up funny names (the village is actually called Lum-Bar Pa’in) but it does feel a little insulting and slightly neo-colonial so to do.

The other thing to do is describe the next battle, almost certainly to be the return of the Vietnamese. They were not outclassed by the Khmer, the latter had a better plan, I think. Returning with firearms seems like a cunning idea. But I also need some new rules as it is a fact that the use of elephants in South and South East Asia declined markedly when firearms arrived, because elephants do not like loud bangs.