Why, you may well ask, would anyone want to fight a pointless wargame? I mean a wargame which is so one-sided as to be entirely predictable. And yet, from time to time, such wargames occur and are even blogged about. For example, I have written about my own breakout scenario, which turned into an amusing, but totally one-sided, rout. Others too have fought out one-sided games, such as a World War Two campaign (based on a chapter in Featherstone’s Wargames Campaign) from Grid Based Wargames. I am not criticising the campaign, by the way, but observing that unbalanced wargames arose naturally from it. These sorts of battles one would hesitate, perhaps, to waste time on in a face to face game, but solo they have their fascinations.

I have just perpetrated another campaign opener (two, in fact) with a very one-sided game indeed of twelve bases on one side against three on the other. But the point is in the careful wording – a campaign opener. Here is the initial set up. 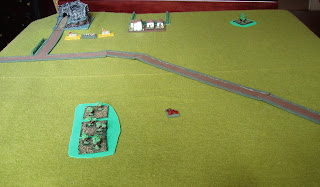 As the regular reader of the blog may be aware, I have been reading a bit about the Reconquista, the re-conquest of Spain by Christian states, with a special interest in the final campaigns of siege and raid from the 1480s onwards. What we see in the picture is the initial set up for the campaign’s first game, which is based around the seizing of a strategically placed castle by the Castilians from the Grenadines.  The castle is not ready to stand a siege, and so the garrison, two bases of spears and one of crossbows, have turned out to delay the enemy sufficiently for aid, in the shape of a Grenadine army marching to the rescue, to arrive.

The Castilians enter by the road, the Grenadine army on a roll of six from the top right of the picture. A neat set-up, do you not think? There are unbalanced forces, uncertainty, a defined objective and a neat narrative. In fact, the narrative is based on the capture of Alhama in 1482, which kicked off Ferdinand and Isabella’s final campaigns. Alhama, however, was a town but I have insufficient city walls to model that, so it has been shrunk to a castle.

I can say, with some confidence, that the castle stands on an important route between Granada and Malaga, and the Grenadines would be considerably inconvenienced by its loss. On the other hand, I can also say that its capture by the Castilian forces will place their garrison in an important but exposed position. Campaign on, at least in the case that the Castilians win.

Anyway, here is the end of the affair (or nearly so). 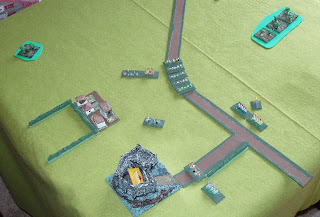 The Castilians are right up to the walls of the castle. Two-thirds of the garrison troops have routed, the other third have retreated into the un-provisioned castle, where they will surrender in two moves time. The Grenadine relief force will not turn up for another seventeen moves – it really did take me that long to roll the appropriate six.

So, you may very well ask, what was the point? Was this, as a wargame, totally unworthy of the name? I am not convinced that it was. After all, a lot of battles in history were one-sided. Alhama itself was taken by surprise, which is hardly going to be a wargame-able extravaganza. But are we, as wargamers, culturally conditioned that things should be fair?

Those are not questions to which I intend to give answers, of course, at least not directly. As historical wargamers, we may well be challenged to engage in historical wargames, re-creations of battles where the two sides were not equal. History, after all, is not chess. But as people playing games, one-sidedness, unless balanced by some fine scenario tuning, is not going to keep us playing for all that long. Even then, scenario tuning is an art form. How does one really balance, say, an Early Imperial Roman army and a bunch of Ancient Britons?

A conventional answer to that question is via a points system. A base of Roman legionaries is one third more expensive than a base of Britons, and so you have fewer of them. It works, but I confess I cordially dislike points systems as they actually detract from historicity. That is, it is quite likely that, at times, the Romans (and their allies, levies and others roped in to be on the Roman side) actually outnumbered the opposition. Rome was the side with the professional army and the logistical support to put them into the field. No-one else really managed it; you could argue that the decline of Rome was either because the system proved too expensive or the opposition started to get more sophisticated (before anyone starts to argue, I am not seriously putting these views forward as single-cause explanations for the fall of Rome. For one thing we can suggest that Rome did not fall at all).

Obviously I do not think that this was really a pointless battle. It is a point of departure. The Castilians achieved their objective, but now they are the ones with the problem. Even though it has changed hands and the Grenadine relief army decided to go home rather than challenge them, the castle is still un-provisioned and will need significant support. Hence the point of the game: the campaign is afoot.

I suppose that what I am really talking about is the difference between a one-off game, with few consequences in the game world, and a campaign. In the other wargame I had recently, the Aztecs finally returned to the field. This too is the start of a campaign, but I find that in that context, a commander is a bit more cautious. For example, Central American warfare was heavily involved with ambushes. The battle system permits extensive ambushing, at least potentially. Suddenly, skirmishers become much more important and useful than they were. Under DBA (which I am using for the moment) skirmishers are most likely to flee from any lost combat. Therefore, I can use them to discover if a terrain item contains an ambush without losing troops and hence weakening my army for the rest of the year (or more).

A campaign, therefore, I suggest, changes the perspective of a wargame by shifting the context to something slightly different. Or am I the only one to suddenly become protective of my troops when I might need them again?