I have been waffling on about Aztecs for a while, and, yes, a photograph of all of them is in the pipeline (see below). Not being one for big parades, really, I have started an Aztec campaign. The rules are the ones I wrote up for Miniature Wargames many years ago (I’m not sure when – around about 2000 AD seems to be the best guess).

Of course, back in the day, there were no blogs to record the campaign battles, nor did I have a digital camera suitable for doing so. But I did have a lot of Aztecs, as I have mentioned. Anyway, the campaign was playing card-based. Essentially, the player moved their army to another city and drew a card and determined whether the city would submit or fight. If a fight was decided upon, allies for the enemy city were determined, and I had to decide whether to fight or not. Not fighting had consequences of losing credibility in the eyes of my nobles, but then losing a battle was worse. There were also random events such has unexpected submissions, rebellions and invasions.

The introduction to the article reads as follows:

You are Itzcoatl, newly elected king of the island city of Tenochtitlan, ruler of the Aztecs. As such, you are technically vassal to Azacapotzalco, the capital of the Tepanec Empire. However, the empire has just been usurped by Maxtlatl, and now is a good time to claim independence and aim for empire yourself.

There are, I think, twelve campaign turns, each with a move and a random event possibility (they do not always happen). The wargame rules used are DBA (actually, second edition). The first turn started with a random event, which was a Chichimec invasion. Funnily enough, the first campaign all those years ago had a Chichimec battle first off.

Still, aside from having déjà vu all over again, here are the starting positions.

I have to offer suitable apologies, of course, for the unexpected late summer sun on the near portion of the table. I am sure it will not happen again. Anyway, my brave Aztecs are to the right and the upstart dog people (for that, apparently, is what Chichimec means) to the left. The Chichimec are mostly psiloi.

The playing cards, incidentally, are ambush markers. If one of my bases approaches within a move of the relevant terrain marker, the card is turned over and, if it is a picture card, an ambushing force is discovered and diced for. On one occasion in the original campaign, I took on a foe, which turned out to consist of 24 bases, with 11 of my own. I lost, as you might imagine. The village in the foreground did have a card, but that has already been ‘sprung’ by the detachment of psiloi deployed for the purpose, and no ambush was discovered.

Appearances to the contrary, the Chichimec are a tough foe in DBA when facing a Mexica army. The latter consists of 6 auxilia (the Aztec militia), three blades (suit wearers) and three psiloi (youth skirmishers). The problem for the Aztec player, as I (re-)discovered is that auxilia can defeat psiloi in combat, but not finish them off. The worst outcome for the psiloi is a flee result, which does nothing for actually winning the battle.

After a few moves, I got the hang of this, and moved my suit-wearers into the centre of the action, slaughtering a few Chichimec skirmishers and just about nudging over the line for a victory. My error in the first place cost me some time (I only just managed victory in the number of turns set out in the campaign rules: 10) and then, of course, the curse of the dice struck and even the blades had a hard time beating psiloi. Still, I did win, at the cost of a militia base.

As you can see, the right had become a rather complicated skirmish, with little advantage to either side, and the left had gone my way, enabling my left-wing skirmishers to turn in and help the centre.

As that was a random event, the next move was mine and I attacked a city which, sadly, in spite of my exalted status as a proven battle winner decided to resist, called in allies and the battlefield consisted of large quantities of ambush-friendly terrain. I am still not sure whether to attack and risk casualties or withdraw and take the penalty to my personal rating.

And now, the moment I am sure you have all been waiting for, the completion of the rebasing project for these Aztecs. At great personal cost and extreme risk, behold: 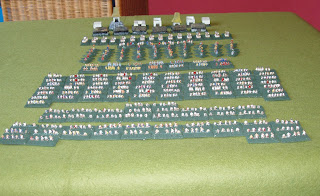 To appropriate a well-known quote from a film: ‘Aztecs, sir. Fhasands of them.’

Well, not quite thousands, anyway. By my reckoning, there are 934 figures above. Yes, that is nine-hundred and thirty-four figures. And there are thirteen buildings. Or, looked at another way, one hundred and thirty-eight bases of troops and fifty singly mounted officers (and the same thirteen buildings, of course). According to my calculations, I could conduct five and three-quarters simultaneous DBA wargames with this lot. Weird, eh?

Skirmishers to the fore both bow and sling armed, followed by archers. The masses are militia bases, with suit bearers and the single officers behind them, then generals and porters. 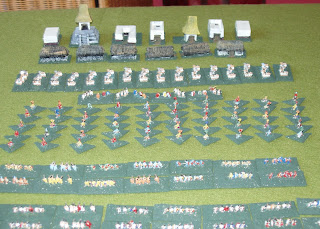 This is a closer view of the officers, generals and suit wearers. You might wonder what the hordes of singly mounted officers are for, as they have no role at all in DBA, and it is a valid question. But I do have a plan for developing some more Mexica flavoured rules which includes suit wearers (as they were the professional soldiers and officered the militia) both indicating order status (as per my usual Polemos rules) and also being able to indulge in single combat with other singly mounted officers to disrupt the order status of enemy units. Admittedly, I have not worked out the details, yet, but you can see the plan with the militia units who have officers from the suit wearers on their bases already (usually, it seems, in red; don’t ask me why).

The other thing you can see is a large number of porter units. These were vital in Central America as there were no draft animals or wheels, but will take a little more thinking about.

Now, I think I need a little lie-down, a stiff drink, and to think about something other than Aztecs. Mind you, I am still rebasing the Wars of Spanish Succession and Great Northern War armies and I have not started the Inca yet…