‘We’re going to land up in the Tower, you know.’

‘It wasn’t our fault. The wind was against us. And it didn’t help that Plonker here ran into Redoubtable.’

Captain Plonker stirred. ‘Not my fault someone ran out of sea room, and that someone didn’t understand the rules of sailing.’ He glared out of the page at the author.

‘Falling out about it isn’t going to help.’ Anderson sighed and pushed his hair up. ‘How are Reliant and Reprobate?’

‘Well, if you’d been boarded and some dago had chucked a grenade in your powder hold, you might be feeling a little, um, charred.’

‘Hard to say. Out of action for the foreseeable. We’ve got them into Scarborough and the guns off them.’

‘So, three burnt and two damaged. That was nearly half our strength so we can put that in the report.’

‘As long as you don’t say that the two damaged ran into each other.’

‘I think I might omit that bit. What else can I say?

‘We did damage some of their ships, and quite badly too. That galleass will be in port for a bit, I reckon.’

‘The point is, though, as in the Channel, we can engage them but not really hurt them. If they board us then, well, they have all the soldiers on board. But we’ve got to close to do any damage, and that runs the risk of being boarded.’

‘Well, we had our orders, and they had theirs. They were not going to stop before getting to port, and we couldn’t stop them. They could have taken and kept Reliant and Reprobate, but chose to try to burn them.’

I confess to having some difficulty with this battle, namely that I had no suitable rules. Still, necessity is the mother of invention and I invented some, although I did have to revise them rapidly (and restart the game) when it became apparent that the English fleet would never get into range of the Spanish as it was.

The scenario was very simple. The Spanish had to sail intact to Whitby. For each ship that made it, Don Pedro receives a base of reinforcements. The aim of the English is to stop them. As noted before, and above, as the English did not manage to stop the Armada sailing up the Channel in formation, the odds are fairly against them doing much damage to the Spanish.

I am not claiming that the rules are particularly accurate or comprehensive, but they seemed to work for a simple play through. The English passed one squadron to the front of the Spanish, inflicting some damage as they went. The bulk of the English passed the other side (on the opposite tack) and the near most squadron had a go. The Spanish sailed on and the English had to turn about and give chase. This is the point at which I messed up the distances and two English ships hit each other. 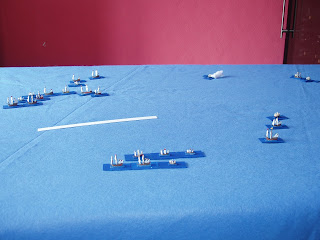 The Spanish are in the top left of the photograph, heading for the port which is out of the picture to the further left. The rest of the English are in the foreground and scattered to the right, except for one unfortunate galleon which was in line with the galleass, hit by gunfire and boarded. The Spanish decided against taking a prize and set it alight. In the top right are the entangled English ships.

The English did catch the Spanish again, but the exchanges were indecisive until the galleass and a Spanish great ship managed to close with a squadron bravely sailing into the midst of the remains of the Spanish formation. This did not end well again, with two more English ships boarded and aflame, while the Spanish sailed on (or limped on, in the case of the galleass and great ship). The English, not realizing how badly damaged they were, and having five ships hors de combat themselves, decided to quit and face the Queen’s wrath. 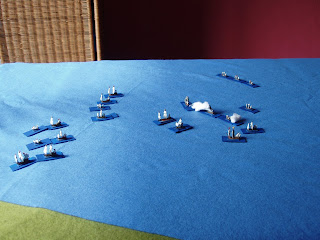 The picture shows the end of the action, with two more English ships alight and really only two English ships able and in the right place to fight further. The action was an interesting afternoon or so. The English manoeuvring was terrible; Spanish tactics, to keep in formation and sail for the port were simpler and easier. It is actually very hard, even with my simple-minded rules, to aim at a moving target – you tend to miss.  I suppose I had better write the rules up sometime.

‘Pedro. We came as soon as we could. We landed only yesterday.’

‘Your men are ashore already?’

‘No, my friend. They are landing as we speak, I trust. I came to consult with you, and share a glass of this.’ Don Carlo brandished a bottle. ‘Rioja. Only the best for my friend the Generalissimo.’

'At last, a decent drink. You can only get stuff that they call "beer" here. It is disgusting. Particularly the next morning.'

As they drank, Don Pedro filled Carlo in on the situation. ‘So, we have got to this point where the road goes north and south. The hills are too steep for the army, and York is south, so that is the aim.’

‘It is the administrative centre for the north of the country. If we take it the English may be forced to negotiate. Anyway, we’ve heard that the Scots are on their way, about to cross the border, so we need to hold this bridge on the road north.’

‘Are there no others?’

‘That is the first bridge over the river; there’s another one further up; we have to hope the Scots don’t know that.’

‘Well, it is sufficiently far away that any force blocking the bridge here should be able to turn and prevent them marching south.’

‘And that is what you want me to do?’

‘With the help of God, yes. March your men straight there. I will supply guides.’

Don Carlos stared at the sketch. ‘Very well. But if you get to York I am coming south to share in the glory!’