However, because I have a digital camera and it was charged up and in the same room as the wargame, I took some pictures. As a matter of record for my narrative ancients campaign, if not for anyone else’s edification, I am going to talk about it here.

You might recall the scenario. Young Alexander IV is set on invading Carthage, and then working his way around the Western Mediterranean via the rest of North Africa, Spain, Southern France and Italy, doing for that region what his father did for the East. First of all he has to gain a foothold in Africa itself. Curtius reports Alexander III as ordering ships to be built for the invasion. I suppose going overland was not that attractive and, even if it were, it would require a fleet to support the army.

Anyway, the Carthaginians were not going to take being invaded lying down and, in this narrative, have a navy. In terms of the scenario, the Macedonians have 25 merchant ships and 25 quinquiremes. Each merchant ship which beaches at the far end of the table means the land army has a base. Every two quinquiremes that beach also add a base, so there is a possible 37 base land army in the offing.

The Carthaginians have 25 triremes and 5 penteconters. The idea of the penteconters was to scout and disrupt the Macedonian fleet and be the last line of beach defence. Well, we can dream, can’t we? 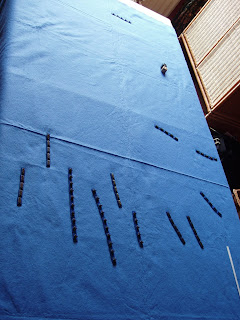 I realised at this point that I was to have around 80 ships on the table at a time and that there was no way I was going to be able to keep track of all the individual seamanship ratings and orders for all of them, let along control anything when the fighting got messy. Some quick averaging of seamanship rolls meant that everyone landed up with a three. Given the nature of the combat (everyone started off in line ahead), I decided that the initiative of the individual captains would be more important, and abandoned command points.

Well, things did get messy. Very messy indeed. There were ships all over the place; at the end one-third of the remaining Macedonian merchant ships were sailing full speed away from the beach, attempting to get away from Carthaginian triremes. The endpoint is below: 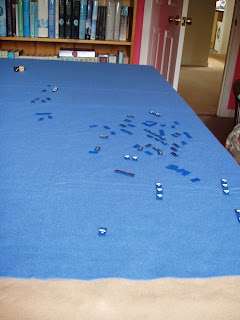 As I said, chaos had more or less ensued. I did find a few interesting tactical issues, however. The blank bases indicate sinkings – there were a few more than what is shown, actually, because I ran out of counters. One issue was the use of sunk ships as cover to avoid being attacked. Both sides made use of this rather well. Several merchant ships, in particular, managed to survive because there was a sunk ship between them and the enemy.

The other issue was the difficulty of triremes taking on quinquiremes. The initial combat between two squadrons, one from each side, went overwhelmingly to the bigger ships. To some extent, this justifies the increased size of vessels during the Hellenistic period. On the other hand, they became less manoeuvrable and I suspect, less seaworthy. Navies were prestige items (and to some extent, still are).

Still, the Macedonians managed to land 16 merchant ships and had 17 quinquiremes left at the end of the battle. This means that Alexander’s army now consists of 24 elements with which to take on Carthage and her allies.